As Iraq aims to rebuild its security institutions, the cooperation with NATO increases. 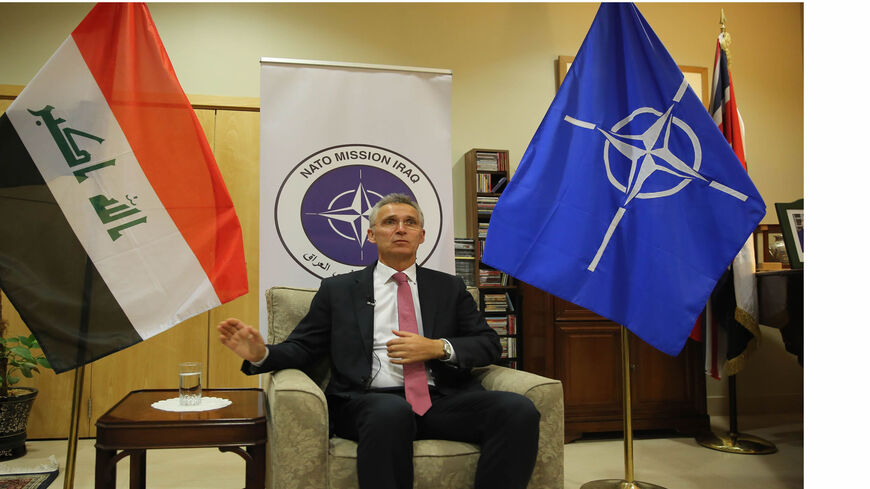 NATO Secretary-General Jens Stoltenberg speaks to AFP about the strikes on two major Saudi oil facilities that were claimed by Yemen's Houthi rebels but which both Washington and Riyadh have blamed on Tehran, in Baghdad, Iraq, Sept. 16, 2019. - Ahmad al-Rubaye/AFP via Getty Images

As part of Iraq's strategy to maintain the security status in the country following the victory against the Islamic State, NATO's role in Iraq has been on the rise over the last few years.

During his meeting with the permanent NATO representatives in Brussels June 30, Iraqi Prime Minister Mustafa al-Kadhimi highlighted NATO's role in Iraq, asking for expansion and diversification of this role in the future.

“Iraq highly appreciates cooperation with NATO and its member states in order to support the rebuilding of our military institutions and enhance the capabilities of our armed forces and security services in the face of terrorism. We have a serious desire to develop this joint cooperation,” Kadhimi said.

“Iraq can count on the support of NATO and its countries for your government and the approach it is working on,” said Jens Stoltenberg, NATO's Secretary General.

As Kadhimi emphasized the capability of the Iraqi security forces in dealing with security challenges in the country, he made it clear that Iraq does not require foreign combat troops as in the past, and that this is why Iraq has been seeking the reduction of coalition combat forces in the context of security discussions during the strategic dialogue with the United States in the last year.

NATO’s contribution would be in the context of a “non-combat mission of a purely training and advisory nature” and the “request, approval and priorities of the Iraqi government," Stoltenberg added.

During the first year of the Kadhimi government, the strategic dialogue meetings have resulted in about 60% of coalition troops withdrawing from Iraq, according to statements from the prime minister.

Kadhimi, however, clarified that Iraq seeks increasing cooperation with NATO countries in terms of sustainable training and working continuously to raise the readiness of the Iraqi military and security capabilities.

“We look forward to continuing NATO’s training of Iraqi forces, rehabilitating and equipping our armed forces, supporting military colleges, expanding police training programs and training the forces on specialized skills and technicians in air and naval weapons to enable them to confront terrorism,” he said.

Iraq considers the evolution of security cooperation with NATO through a reduction of combat forces, but with an increase in training and logistic support, in order to obtain the necessary expertise of its military institutions to help raise the level of their professionalism and efficiency, and provide them with sufficient equipment.

In the same vein, Kadhimi asked all parties involved in Iraq to adhere to international legitimacy and not to interfere in the internal affairs of countries, and avoid launching any cross-border aggression against any independent and sovereign country.

The recent US attack on some of the Popular Mobilization Units (PMU) along the Iraqi border with Syria has raised a backlash among pro-PMU groups in Iraq. In addition, the continuing clashes between Turkish troops presented in northern Iraq with Kurdish forces is seriously challenging the country's security.

Iraq has condemned both the US attack and clashes in northern Iraq, asking all parties to maintain the highest degree of self-restraint and avoiding any escalation in the country.

The reduction of foreign combat troops in Iraq and engaging in active diplomacy with all parties involved, in addition to adopting a national dialogue with all internal parties, are the pillars of the Iraqi government's policies to reduce tension in Iraq, which had become a direct battleground between the United States and Iran in 2020, following the assassination of Iran’s Quds Force commander Qasem Soleimani and the subsequent retaliation bombing of Ain al-Asab base in western Iraq by Iran.

In line with the de-escalation policy, the Iraqi government is avoiding any kind of involvement in regional or international axes against any side in the region. During his meeting with NATO member states, Kadhimi repeatedly emphasized Iraq’s refusal to use its territory to attack any of its neighbors.

In addition, the Iraqi government is building a broad security vision that not only focuses on terrorism and illegal group activities, but also concentrates on comprehensive development and reconstruction efforts in order to remove the social ground of terrorism and instability, as evidence by Iraq's hosting King Abdullah of Jordan and Egyptian President Abdel Fattah al-Sisi on June 27.