Egyptian security forces closed down cafes, searched citizens and went through their phones ahead of the anniversary of the January 25 Revolution. 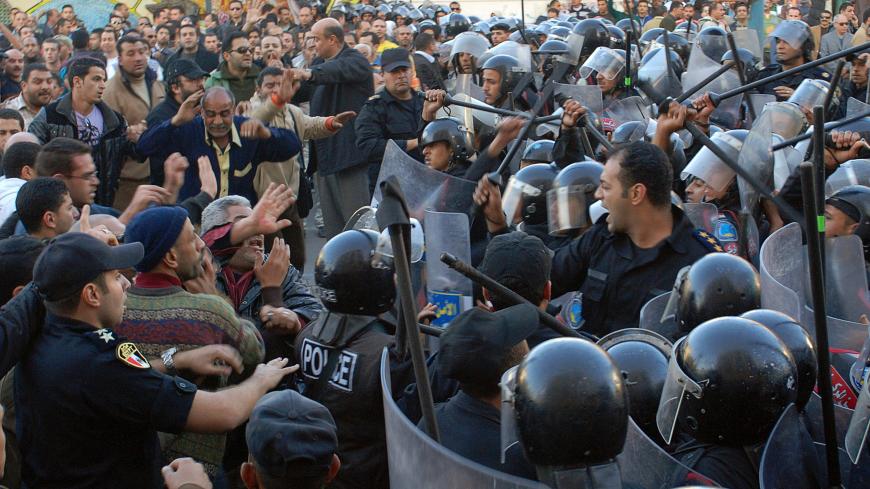 Egypt's main squares witnessed an increased deployment of security personnel after the Ministry of Interior issued instructions to beef up security ahead of the anniversary of the January 25 Revolution. The instructions, which are not public, circulated after rare anti-regime protests broke out in September 2019. The efforts seemed to have worked, with the day passing with little fanfare.

National security and general security officers affiliated with the Ministry of Interior were deployed, in addition to riot police, in anticipation of possible protests Jan. 25 in the main squares of Cairo and Giza, notably Talaat Harb Square, Tahrir Square, Esaaf Square and Ramses Square. Police forces are still deployed in those squares until the end of the week to ensure that no incidents take place.

Mohamed Ali, an Egyptian actor and former military contractor, spread calls Jan. 9 to take to the streets to commemorate the ninth anniversary of the revolution. He called on President Abdel Fattah al-Sisi to open Tahrir Square and all main squares to celebrate this occasion.

In support of Ali’s calls, social media activists launched an Arabic hashtag that translates into #TothestreetsonJan25 on Twitter. However, following the reactions on the ground, he announced on Jan. 25 that he was retiring from politics.

Mohammed Nour al-Din, a security expert and former adviser to the Ministry of Interior, told Al-Monitor that security forces were deployed on all main streets in Cairo and Giza, as per orders to intensify the security presence following calls for Jan. 25 protests.

Nour al-Din said such calls for protests were never expected to succeed because Egyptians are aware of their destructive goals and because those who issued the calls are partisans of the Muslim Brotherhood, which Egyptians reject. Indeed the calls failed to resonate, as the anniversary of the January 25 Revolution went by with no protests at all.

Even so, the increased security presence was necessary, he said. Police officers must still fulfill their duties in providing security, especially around vital facilities in different governorates, mainly Cairo.

Security was reinforced to protect churches, some Sufi mosques and key facilities, at the same time as Coptic holidays, New Year and Christmas celebrations, Nour al-Din said. The Ministry of Interior received information underlining the importance of tight security to anticipate acts of terrorism or vandalism on National Police Day.

Security forces arrested four members of the Constitution Party from different governorates without clear charges Jan. 17. The party released a statement on Facebook, saying the Ministry of Interior arrested four of its members “as part of a wider crackdown and violations’ campaign on civil forces. Several members of parties and other political groups have also been arrested.”

Ali, the former contractor, called for demonstrations against Sisi back in September 2019, after accusing the president and army commanders of squandering public money to build presidential palaces.

Abdel Salam added that individuals have been arrested after police search their mobile phones in the streets.

“Arrests and random searching of citizens are ongoing," he said. "More than 25 citizens from Helwan in south Cairo sought my help to issue official reports about the disappearance of their children after days of searching for them and asking about them in police stations and hospitals.”

He said the security forces have shut down notable restaurants in downtown Cairo and searched patrons' bags and mobile phones. Some individuals who had sarcastic political posts on their Facebook pages were taken away in police cars. Most restaurants are still closed, and will remain so until the end of the week until the security situation is fully stable.

Abdel Salam said the police randomly stop people in the streets and search their mobile phones with no warrants. Ever since the Sept. 20 protests were organized via mobile phones and internet, police have conducted such searches. If people refuse a search, they are arrested, according to Abdel Salam.

He said searching mobile phones and looking at Facebook accounts and citizens’ private photos is a violation of the constitution, specifically Article 57, which states, “Private life is inviolable, safeguarded and may not be infringed upon. Telegraph, postal and electronic correspondence, telephone calls, and other forms of communication are inviolable, their confidentiality is guaranteed and they may only be confiscated, examined or monitored by causal judicial order, for a limited period of time, and in cases specified by the law.”

George Ishak, a member of the National Council for Human Rights, a state-affiliated rights’ council, said that arresting citizens and searching their mobile phones in the streets has been on the rise following post-Sept. 20 security restrictions.

Ishak told Al-Monitor, “The National Council for Human Rights condemned the police search of citizens’ phones forcibly in the streets in an official statement Oct. 4. The council confirmed that the police stopping citizens in the streets, searching their mobile phones and exposing their data breach several texts of the constitution related to privacy of citizens and their correspondences and calls.”

The council, he said, also condemned “the wide-scale arrest of citizens in the squares and streets, without allowing them to call their families and without informing them of the accusations against them. The council dismissed the procedures as an attack on constitution-protected rights.”