Trump’s ‘deal of the century’ fails to resonate among Egyptians

While the Egyptian government treaded cautiously in its response to the rollout of the US administration’s long-awaited peace deal, expressing Cairo’s “appreciation” of US efforts, analysts and the public widely condemned the plan. 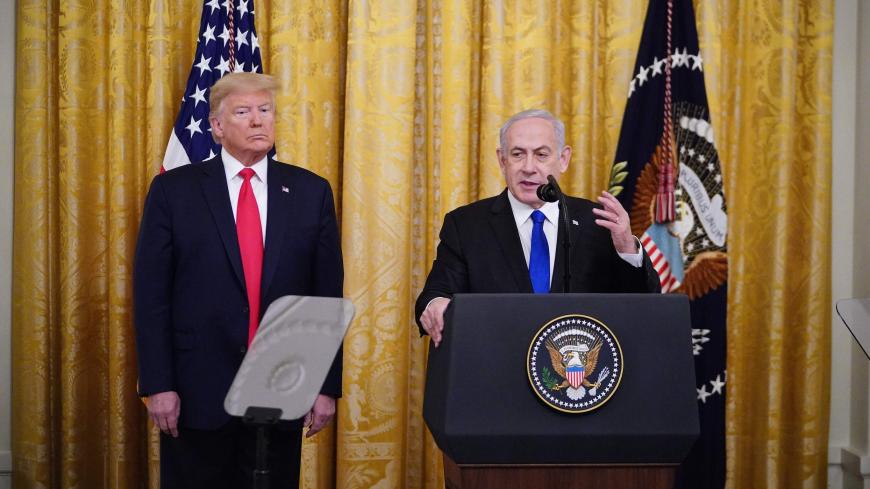 Ending months of speculation, US President Donald Trump outlined his proposed plan for Middle East peace in Washington Jan. 28, describing it as a "win-win" for both Israel and the Palestinians. Trump said he envisions "a two-state solution with Jerusalem remaining as Israel's undivided capital" and "a capital in East Jerusalem for a future Palestinian state." Promoted as "the deal of the century" by its proponents, the plan failed to evoke the same enthusiasm in Egypt, America's closest ally in the Arab world and a strong supporter of the UN-sponsored two-state solution.

Trump's plan drew mixed reactions from Egyptians on social media networks. Some expressed anger and dismay over the proposal. Others shared an image of Trump and Israeli Prime Minister Benjamin Netanyahu kissing. Some reminisced about late President Anwar Sadat and the Palestinians' "missed opportunity" for peace, in reference to Sadat's exhortations to Palestinians to accept the Camp David Accords he signed with Israel in 1978, which were brokered by then-US President Jimmy Carter. Many of those propagating the “missed opportunity" view are Egyptian government supporters who are apathetic toward Palestinians in Gaza, whom they perceive as supporters of the Muslim Brotherhood because of Hamas' close relationship with the outlawed group.

"This is an annexation plan rather than a peace plan," political analyst and publisher Hisham Kassem told Al-Monitor. "Israel and the United States know full well that the proposed plan will be rejected. It is only a means of legitimizing Israel's annexation of more West Bank land and the Jordan Valley."

Reform leader Mohamed ElBaradei, who resides in Vienna, meanwhile, tweeted that the plan was no more than "a political stunt that could spark unilateral moves to annex territory," echoing the words of former US Vice President Joe Biden. In another tweet, he described it as "a surrender plan in violation of every norm of international law and basic principles of equity and fairness."

"It's a harbinger of instability and extremism," he wrote.

“This is not about a two-state solution,” Nabil Fahmy, former foreign minister of Egypt and now a dean at the American University of Cairo, told Al-Monitor’s Andrew Parasiliti. “I’m frankly flabbergasted,” he said, “and really worried this will have long-term consequences, destroying the tenets of a two-state solution” for future negotiations.

The Egyptian government chose to tread cautiously, releasing a Foreign Ministry statement that expressed "Egypt's appreciation for the US administration's continued efforts to achieve a just and comprehensive peace," while emphasizing the need for both parties to the conflict to "carefully study the US vision for peace and resume negotiations brokered by the United States to express both parties' visions in order to reach an agreement that fulfills the hopes and aspirations of both peoples [the Palestinians and Israelis] for a just and comprehensive peace and for the creation of an independent Palestinian state."

President Abdel Fattah al-Sisi, whom Trump described as "my favorite dictator," has engaged in discussions on Middle East peace with Jared Kushner, Trump's adviser and the chief architect of the plan. Some opposition figures are sharing a clip on social media from a press conference between Sisi and Trump, in which the former promises the US president that he will support the “deal of the century.” Some Israeli analysts had speculated that Sisi's main role in the deal would be to recruit leaders of moderate Arab states to support to the plan. This is in stark contrast to other reports suggesting that "Egypt insists that East Jerusalem be the capital of a future Palestinian state and making clear that any economic plan for Gaza is no substitute for a diplomatic plan accepted by the Palestinians."

"The Arab countries [the UAE, Oman and Bahrain], which sent diplomatic envoys to Washington to witness the official launch of the plan, are safeguarding their interests," Kassem said. "They have chosen to side with the US and Israel in the face of the security threat posed by Iran to Gulf countries."

"Egypt, too, is willing to play along so as not to lose favor with the United States," he said. "The country was once a key regional player mediating between Israel and Palestinian factions. It no longer has clout to oppose the deal."

Under the proposed agreement, Egypt would receive a massive economic aid package of $9 billion. Half of it would be in soft loans in three stages over a 10-year period for development and infrastructure projects in Sinai, as well as for revamping the country's transport infrastructure, supporting small and medium enterprises and the country's energy efficiency and diversification initiatives. The bulk of the funds, meanwhile, will be dedicated to the establishment of a power grid to transmit electricity from Egypt to Gaza, and for industrial zones that would boost trade between Egypt, Gaza, the West Bank and Israel.

Whether or not the proposed deal takes off remains to be seen. Kassem, however, believes it is "too outrageous" to be taken seriously.

"Besides, the political standing of both Trump and Netanyahu is up in the air," he said. "One is being impeached and the second indicted on corruption charges. The plan is likely nothing more than an election ploy on Trump's part: He made some promises in his last election campaign that he has to live up to before his current term ends. One of these was to move the American embassy to the eternal capital of the Jewish people, Jerusalem. That promise has been fulfilled; the rest is empty rhetoric."