A satirical song called "Salmonella" has stirred up public debate on misogyny and male chauvinism in Egypt. 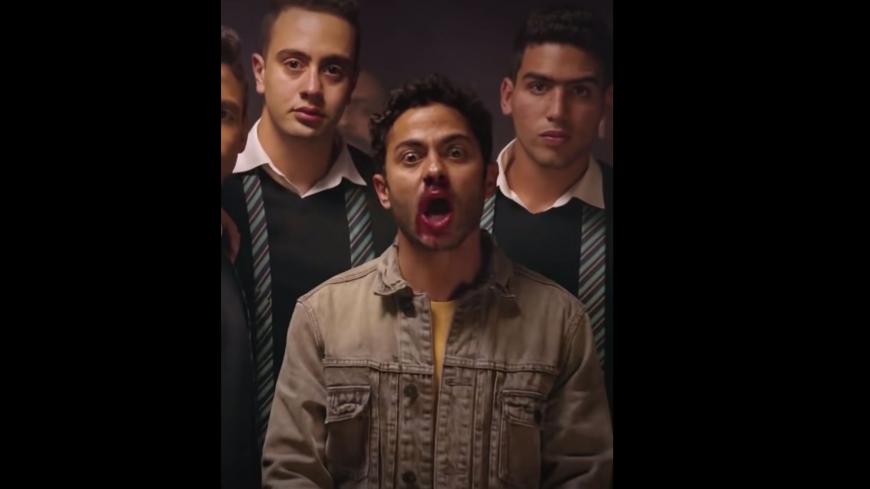 Singer Tameem Youness is seen in a still from the music video for his controversial song "Salmonella." - YouTube/tameemyouness

When art director-turned-singer Tameem Youness released his new music video, "Salmonella," on YouTube Jan. 1, little did he know he was about to open a Pandora's Box.

The satirical video sparked wide controversy on Egyptian social media networks. Fans hailed it as "creative," "empowering" and "a genius work of art that accurately depicts sexist behavior and attitudes," while critics including women's rights advocates deemed it "harmful" and "inciting violence against women."

Egypt's National Council for Women, the authority overseeing women's issues in the country, was among those that denounced the video as "counterproductive " and "promoting hatred."

"The video violates the country's 2017 Media Code of Ethics, which guarantees respect for people's dignity and criminalizes slander, defamation and racist slurs targeting any group or segment of the population. It also incites sexual harassment and abuse of women, a dangerous phenomenon that should not be joked about," the council said in a statement on Facebook Jan. 6. It urged Google, the owner of YouTube, to remove the controversial video. While it remains uncertain whether Google will heed the call, Facebook has already added a warning to viewers that the video "contains cruel and insensitive content."

Nehad Abo El Komsan, founder and director of the Egyptian Center for Women's Rights, described the song as a hate crime. In a damning Jan. 2 Facebook post, she scornfully wrote, "The morgue doesn’t need more dead bodies," in reference to the fatalities caused by sexual violence.

"Tameem is an art director and understands well the [negative] impact his lyrics can have on people's attitudes and behavior," she said, accusing the singer of trying to make profits from his online videos regardless of the consequences.

The video, which quickly went viral on social media, has been viewed by more than 10 million people on Youtube and liked by some 356,000 people at the time this article went to press. Some 21,000 have downvoted it.

In the video, Youness plays the part of a sexist young man who is unable to deal with rejection. He becomes overly aggressive when his advances are turned down. In the lyrics, the singer promises to shower the woman he admires with gifts — jewelry, a penthouse apartment and a lavish wedding ceremony with performer Mahmoud El Esseily entertaining the guests — if she consents to giving him her phone number and dating him.

"I will buy you flowers, paint your portrait, make you a homemade pizza with melted cheese that stretches far and put my jacket around your shoulders to keep you warm in the cinema," he chirps. His mood then changes abruptly, and he threatens in menacing tones that if she dares refuse him, he will throw the pizza at Esseily, trip her and tear his drawing to shreds. Appearing in several scenes in the video with a bloodied mouth, he warns her that she would become overweight and be rejected by another man and come back to chase him. He says she will become infected with Salmonella, the source of the song's odd title.

The chorus repeats the blatant threat "Just try saying no!" over and over again as macho scenes unfold of sturdy men shoving each other and of Youness and a much bigger man dancing together.

The uproar prompted Youness to publish a video on Facebook "to clear up any misconceptions about the song." While he stopped short of apologizing, he downplayed the concerns of critics, denying the song had negative and sexist connotations. Youness said, “Most people like the song and there are some who have taken offense to it. That is their taste; I cannot change that but their numbers are small. I had expected many more people to oppose it."

Youness went on to explain that the song is not prejudiced against women but instead meant to “lampoon enamored young men who go nuts and turn abusive when their advances are rejected. … This is so because they are insecure."

"I chose not to publish a disclaimer with the video as that would have ruined the effect. I am a satirist; I love to joke and will continue to crack jokes," Youness said at the end of his message.

Yet many in Egypt’s patriarchal society, where male chauvinism prevails and sexual harassment remains a systemic problem, failed to see the humor in “Salmonella.”

Facebook user Judy Fahmi slammed the singer, “Not funny. This is a red line that you should never cross. It’s not a joke to touch a woman in any way if she doesn't want it."

Another user, Asma Badawy, wrote, "Is your message directed at young men and adolescents like those that appear behind you in the video? If so, are you sure they will understand that you are joking?"

The fact that the release of “Salmonella” happened to coincide with a shocking online video of a mob sexual harassment incident involving two girls in the Egyptian Delta city of Mansoura on New Year's Eve, has only added fuel to the fire and the singer's denials that his video is hostile to women have largely fallen on deaf ears.

Sexual harassment is commonplace in Egypt and has been described by some rights advocates as an epidemic. A 2013 UN Women report revealed that 99.3% of Egyptian women have experienced sexual harassment in some form or another at least once in their lifetime. An anti-harassment law passed in June 2014 after a string of mob sexual assaults against women who participated in rallies in Tahrir Square has yet to be fully enforced. Two women who spoke out against harassment in online videos have paid a dear price: In 2018, activist Amal Fathy and a Lebanese tourist were arrested and detained on the charge of spreading fake news that tarnishes Egypt's image. While both have since been released, their prosecution has sent a chilling message to other women, possibly intimidating them into silence.

Amidst the hullabaloo over the video, Aida El Kashef, a young filmmaker known for her feminist views, was emboldened to publicly speak out about her own harassment ordeal from 2016 and 2017 -- with Youness himself as the alleged culprit. Clearly agitated by what she perceived as the singer's callous approach to male chauvinism, she shared her firsthand account of what happened on her Facebook page, including about his angry reaction when rejected.

"It started with what i thought was normal flirting, to being extremely pushy when a a nice friendly no wasn't enough, to literally pushing him away physically over and over again, to him making public scenes when i got aggressive and told him [you are a harasser], to threats of hacking my devices." El Kashef ended by telling Youness to apologize, “try to listen and seek help."

Youness responded with a short, dismissive message on Facebook Jan. 6, addressed to all critics of the song: "I accept criticism and differences of opinion but I do not accept the suppression of ideas and stifling of free expression and speech and I categorically reject the false personal accusations."

Despite the inflamed sentiments and the outpouring of anger on social media, perhaps one good thing is that the controversy has stirred up a new, more frank public debate about the sexism deeply entrenched in Egypt's patriarchal culture. The discussions have led more women to realize they are not alone in facing abusive behavior. As more women speak out, the number of those willing to tolerate such practices can only decline.