Let's talk about sex in Egypt

A video by young Egyptians about sexual repression has gone viral via social media. 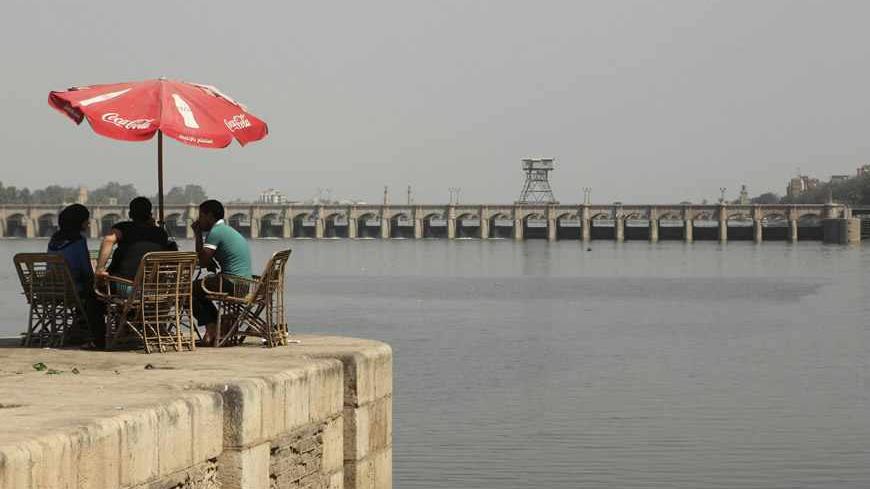 People sit in a cafe overlooking the barrages of Al-Qanatir on the river Nile in Cairo, May 6, 2013. - REUTERS/Asmaa Waguih
Shadi Rahimi
shadirahimi
November 24, 2013

CAIRO — A well produced viral video starring several young Egyptians has been making the rounds recently on social media sites, sparking heated discussions around issues beyond the well known problem of sexual harassment of women in the streets and on public transport.

It talks about sex — specifically the cause and effect of sexual repression in Egypt as perceived by the creators of the satirical video, and a number of people sharing the video enthusiastically on Facebook.

"A funny, smart, refreshing exposé of some of the rampant sexual hypocrisy here and a brave attempt to shed some of the taboos around it," wrote an Indian woman who is dating an Egyptian man in Cairo on Facebook.

The video begins with a young Egyptian man who says that sexual repression has become so engrained in Egyptian culture that it has resulted in daily, and absurd, judgments about everyday behavior.

"'He's going up to his apartment with her? They're definitely doing something wrong.' Why can't they just be platonically hanging out together? Society has ruined this. The problem is way beyond repair," he said.

"Every guy now has a sexual relationship … with his computer," joked the video’s narrator, a young Egyptian man with slicked-back hair who alternates between wearing a crisp black suit and jeans.

Recent resharing of the video has resulted in 2,500 more views since Nov. 23.

Early on, the video cuts from voyeuristic shots of Egyptian couples filmed in parks and streets, to a white screen with writing that reads: "Libido: Do you know what it means?" That is when viewers meet Mazen — "a 20-year-old Egyptian guy" who, "like every other Egyptian guy," badly wants to sleep with a girl, but can't. "Why cant he?" the video asks, and begins its lesson.

A cartoon explains that when a young Mazen asks his parents about sex, he is told only, "shame" and "forbidden." In school, he does not receive sex education. So, Mazen turns to pornography.

Egypt is the number two country in the world for Google searches of the word "sex," the video states. Last year, under the rule of Muslim Brotherhood member and then-President Mohammed Morsi, the prosecutor-general tried, unsuccessfully, to implement an earlier court ruling banning pornographic websites — a move widely criticized for its estimated cost and censorship.

"Why have Mazen and the rest of Egyptian society become like this? Because he can't engage in premarital intercourse," the narrator remarks regarding pornography, presenting a thesis that is debated by the mostly Arabic commentators of the video.

One of the most recent comments, posted on Nov. 24, echoes the sentiment of some critics: "So the solution being presented here is, have sex before marriage as much as you can and everything will be okay."

The critique continues: "They did expose a problem in Egyptian society, and kudos for that, but there is no solution being presented here except: forget God, forget religion, forget society. … How ignorant and immature."

Another comment, by "Ahmed Adly," recalled how he used to sneak around a hotel where he and his girlfriend worked "to hook up," presumably somewhere in Egypt. "The hotel security's main job was to prevent people from 'immoral behavior.' But we always found a way,” he wrote.

Filmmaker Youssif, 32, said that while many Egyptians do not engage in premarital sex, exactly as many others do and "just don't talk about it."

"There is a lot of hijabi girls who are not virgins, and they have sex. It's normal, but they don't talk about it or share it,” he said. “They are talking only about a certain category of people who think it's shameful or haram.”

But Suzy, an Egyptian in her 20s, said of the video, “I think it is 100% true.” Her friend Nesma, also in her 20s, agreed. “The fact that we’re taught to be ashamed of physical affection reinforces specific patriarchal characteristics. So a lot of these guys who act so open-minded end up judging the very women they are in relationships with. It’s very common to hear guys say, 'I’ll never marry a girl I messed around with,'” Nesma said.

“It’s not just social acceptance of sex that needs to change, it’s also the way society views women and virginity,” she added.

Among topics discussed, the video also presents facts about sexual harassment in Egypt. A United Nations Entity for Gender Equality and the Empowerment of Women report on Egypt this year found that 99% of the women they surveyed had been subject to harassment. The study also found higher instances of harassment among women who dressed conservatively.

A majority of the self-identified harassers in the study were men aged 24 and under. Of the harassers interviewed, a majority, 67%, said they harassed women to “fulfill a sexual need.”

“I think it’s also because of the way we were raised,” said Ehab, 27, who is writing a hip-hop song about the issue. “It’s our parents, they make you think it’s bad to hang out with girls. You’re separated in schools, and when you get older you don’t know how to act right with them.”

Such solutions are "great" but won't extinguish sexual energy, the narrator says. The video concludes by apparently directing a new generation of Egyptians to alleviate their sexual needs and remove the taboo from premarital sex, in part by embracing it.

"Not to be blunt, but one must get laid," the narrator says.