Excavated since 1990 by Belgian and Turkish archaeologists, Sagalassos offers not only a visit through majestic Roman monuments but also a glimpse on how people lived, worked, worshipped and died in the past. 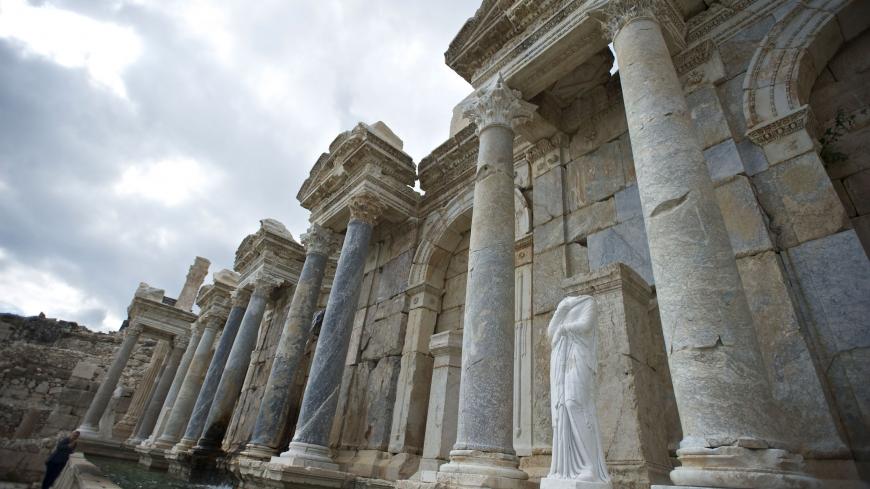 A view of the ancient city of Sagalassos, one of the largest archaeological digging sites in the country located near the present-day town of Aglasun, southwestern Turkey, Oct. 8, 2015. - Kerem Kocalar/Anadolu Agency/Getty Images

Sagalassos is one of the best-preserved ancient cities of Turkey and one of the best kept archaeological secrets of the Mediterranean. Its secluded position, nested at an elevation of 1,500 meters (or about 5,000 feet) in the Taurus mountains in southwestern Anatolia, makes it difficult to reach for archaeologists and tourists alike. Laid out over natural terraces on a slope, in wintertime it is often covered with snow, further enhancing its peaceful and picturesque atmosphere.

Since 1990, it has been excavated by a mission led by the Catholic University of Leuven in Belgium. The Sagalassos Archaeological Research Project, which has both Turkish and international members, has, over the years, become a model of interdisciplinary research and interaction with the local community. It is also a fierce battleground between the diverging needs of scientists concerned with preservation and politicians yearning for development.

Already established as a political settlement during prehistoric times, Sagalassos was conquered by Alexander the Great and in the 1st century B.C. became part of the Roman Empire, as an urban center rich in wealth and monuments. It became known as “the first city” of the Roman province of Pisidia, particularly favored by Emperor Hadrian (r. 117 -138) where statues of emperors and gods were worshipped side by side.

It was abandoned in the 7th century after devastating earthquakes and erased from memory. When the first European travelers rediscovered it in the 18th century, they found magnificent ruins that still showed their original Roman character: temples, public baths, large-scale fountains, paved open-air markets, a columnated street and a theater for 7,000 spectators that was left unfinished. It was never looted or rebuilt upon.

Archaeologists arrived a couple of centuries later. The first survey was carried out in 1985, excavations started in 1990. On the other hand, tourists — especially from abroad — are very few in comparison to Sagalassos' artistic and naturalistic value. In 2018, it was visited by 48,471 people.

Two exhibitions — one organized in Belgium in 2011-12, the other currently showing in Istanbul — exemplify two different approaches to the study, conservation and touristic development of the archaeological site.

"Sagalassos. City of Dreams," hosted by the Gallo-Roman Museum of Tongeren, Belgium, displayed the colossal heads of the Roman Emperors Hadrian and Marcus Aurelius found in Sagalassos and panoramic images of its most spectacular buildings. Indeed, in the first 20 years of activity, the mission, though interdisciplinary from the very beginning, mainly focused on the excavation of the urban center and on the reconstruction of monumental arches, fountains and columns using original stones and marbles (anastylosis).

Thanks to grants from the World Bank and the West Mediterranean Development Agency, the Sagalassos team provided the first professional services to tourists, such as guidebooks, a visitor center, a coffee shop, toilets and safe paths. However, the information panels inside the archaeological site still reflect a traditional approach: They give details almost exclusively on the urban area and monumental structures.

“Sagalassos. Once upon a time in the Taurus," running until May 28 in the Yapi Kredi Bank's exhibition space in downtown Istanbul, testifies to the shift toward more innovative and engaging forms of research and public outreach. Tulay Gungen, general manager for culture, told Al-Monitor that they choose Sagalassos as the theme of the exhibition for two reasons. "First, because it is not well known by the public; and second, because the research conducted there is special," she said.

Since professor Jeroen Poblome was appointed director of the mission in 2013, the interdisciplinary team working in Sagalassos — archaeologists, architects, anthropologists, zoologists, geologists, biologists and botanists — has increasingly switched its attention from the urban center to the surrounding landscape, from the emperors and elites to the middle and lower classes of society. “There is more knowledge to be gained from an ancient site than the mere study of its monuments," Poblome told Al-Monitor.

Over three floors, the overview exhibition shows how the Sagalassos region has evolved over time, from over 100,000 years ago to today, through panels and objects of everyday life such as prehistoric tools, oil lamps, marble fragments and pottery. It makes visible how the city's inhabitants' used forests for fuel and food and what kind of impact they had on the environment; what vegetables they ate and what animals they used for transport; how they produced and exported their fine tableware; and how they collected and distributed water. Researchers explain their work to visitors through video messages.

The exhibition in Istanbul is not only a summary of the research projects carried out over 30 years, but an intermediate step toward a more ambitious goal. Indeed, the informative materials prepared for the exhibition, Poblome said, will be used to enrich the archaeological site with a new set of panels, so as to give visitors a more complete and fascinating picture.

Life in the field has not always been easy for the Sagalassos Archaeological Research Project. On the one hand, they cooperated with local authorities, developing projects of sustainable tourism through a foundation, the Sagalassos Vakfi, and providing training and jobs to the villagers of nearby Aglasun; a development plan under discussion with local actors in 2016 had to be abandoned after the coup in Turkey due to political turbulences. On the other hand, on a couple of occasions the team had to dissuade the Ministry of Culture and Tourism from taking hasty and ill-conceived decisions. The mission receives from the ministry a permit to excavate every year.

In 2012, for example, they were consulted about a pending authorization for a marble quarry on Akdag mountain, which would have irredeemably changed the features of the landscape around Sagalassos. After a survey certified the existence of several human settlements in the area envisaged for the quarry, the plan was later canceled and the protection zone previously encompassing only the archaeological site — where such activities are strictly prohibited — was significantly enlarged.

In 2017, a public tender was announced for the rebuilding of the ancient theater and for a new survey to measure and draw again the whole monumental area, in view of further reconstructions. The Sagalassos team objected that the theater had never been finished in the first place and that its ruins are today in a state of delicate balance with the environment, physically as well as aesthetically. The theater was taken out of the contract, no more rebuildings are envisioned.

What best represents those two opposing views is the candidature of the UNESCO World Heritage List. The ancient city of Sagalassos was added to the Tentative List of candidates in 2009, but members of the archaeological mission are not very keen on its joining it.

Speaking last December at a conference on world heritage sites in Istanbul, professor Ebru Torun, assistant director of the Sagalassos project, explained that UNESCO would protect and promote only the urban settlement, whilst their approach is indeed focused “on the large and complex historical landscape,” and therefore incompatible with a traditional and narrow vision of cultural heritage. “Being concerned only about the monumental center doesn't make sense anymore,” she concluded.