As Palestinian Ministry of Tourism prepares its file on Nablus for the UNESCO World Heritage List, volunteers take revamping of a Roman site into their own hands. 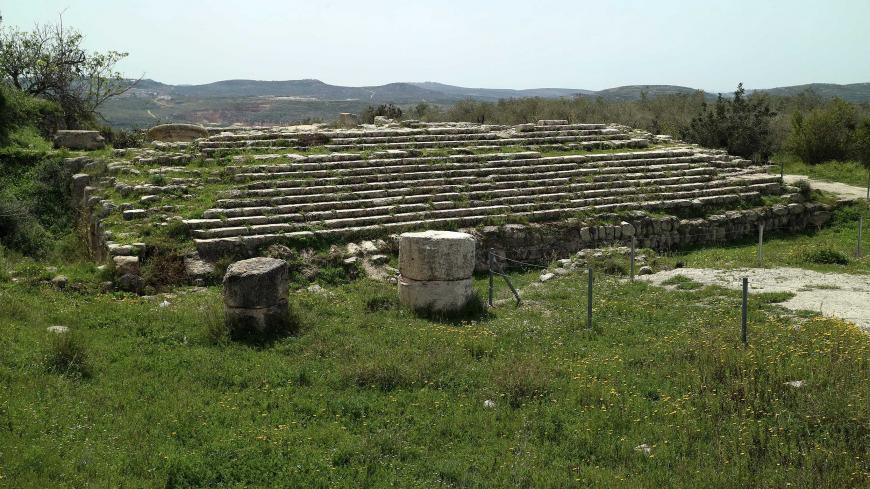 Nablus, WEST BANK — Students from An-Najah National University, joined by the Ministry of Tourism and Antiquities staff at the West Bank city of Nablus, have cleaned up the Roman hippodrome, one of the city's best-known tourist attractions.

In July and early August, the students removed over 40 truckloads of garbage and waste from the site of the hippodrome, as well as weeds, thus enabling the ancient site, with its partly excavated Roman columns, seats and arena, to become a place where tourists can visit.

The radical difference between before and after the cleanup has spurred a debate on the neglect of the numerous monuments around the city of Nablus, which is currently on UNESCO's Tentative List of World Heritage Sites. Placement on this list is the first step toward the site's inclusion in UNESCO World Heritage list — a country may not nominate sites that have not been first included on the Tentative List. The Tourism Ministry officials say that they are preparing the nomination file on the Old City of Nablus to become part of the World Heritage.

Currently surrounded by the vegetable market from one side and the city's central mall on the other, the hippodrome was constructed in late second century, along with several nearby sites for games and entertainment, including a theater. A century later, an amphitheater was built at the circular end of the hippodrome. The hippodrome could hold 25,000 spectators and was widely used, until it was converted into a gladiator arena under the reign of Philip the Arab, the Roman emperor who raised the status of Neapolis, as Nablus was called in Greek, to a Roman colony in 244 A.D.

Loay Abu al-Soud, a professor of tourism and archaeology at An-Najah University, told Al-Monitor that the hippodrome and the amphitheater enjoyed high stature, as the Roman emperor himself attended the games.

"This place must be overhauled and rehabilitated as an archaeological site in order to shed light on the history and culture of Nablus," Abu al-Soud added.

Despite its historical significance, the site had been neglected after some excavations in the late 1960s and 1970s, when valuable coins were discovered.

Archaeological expert Abdulla Kalbouna, who had served as head of the monuments department at the Ministry of Tourism for years, noted that Nablus has 67 sites that go back to the Islamic Age and 14 Roman sites, as well as a major Canaanite site. Some of these sites, Kalbouna said, are to be included in the Nablus dossier to be submitted to UNESCO.

Speaking to Al-Monitor, Kalbouna acknowledged that the fact that the hippodrome had become a garbage dump showed the lack of care toward the city's ancient sites.

"Dozens of relics are being destroyed while many others have been stolen," he said, adding that his master's thesis, on archaeological heritage of the city of Nablus, documented dozens of thefts.

The Ministry of Tourism and Antiquities agreed that they had not been able to protect and renovate some of the sites, indicated that their hands were tied due to their limited financial resources and the complicated issue of ownership of the lands on which these sites are located.

Abdul Rahim Hamran, director of development at the ministry, told Al-Monitor that some of the land housing ancient sites are currently in private hands. Expropriating them would mean a lengthy and costly legal process.

He said that the Ministry of Tourism is currently working on turning the site of the hippodrome into an archaeological park in a collaborative effort with UNESCO. Under their plan, the park would include a center for tourist services, as well as private shops and tourism facilities.

Hamran revealed that the ministry is hoping to add the entire city of Nablus to the World Heritage List. "We are currently working on our dossier that we will be submitting to UNESCO; once we have finished the nomination work on Jericho city," he said.

But tight budgets often get in the way of the ministry's renovation plans. Hamran complained that the ministry is working on a skeletal budget and needed both volunteers and international funding. In 2011, the Dutch government allocated funds through UNESCO for Tell Balata, a Canaanite city dating back to the 2nd and 1st millennia B.C., located between Mount Ebal and Mount Gerizim in Nablus. A team of international archaeologists, including experts from Leiden University, recommenced the excavation of the ancient site. It is currently an archaelogical park.

Other archaeological sites in the city, such as the waterways located in the al-Qaisariya neighborhood in the Old City of Nablus back to 69 A.D. and the Roman theater in the Ras al-Ein area are also awaiting renovations.

"All of the annual budget for renovations has already been allotted," Hamdan said. "As such, some of the plans will have to wait a long time."