How an archaeologist saved Turkey's 'cotton castle' from careless tourism

Francesco D'Andria, the Italian archaeologist who led the excavations of Turkey's ancient Hierapolis/Pamukkale for 15 years, has recently retired and leaves behind a legacy of defending antiquities from reckless tourism. 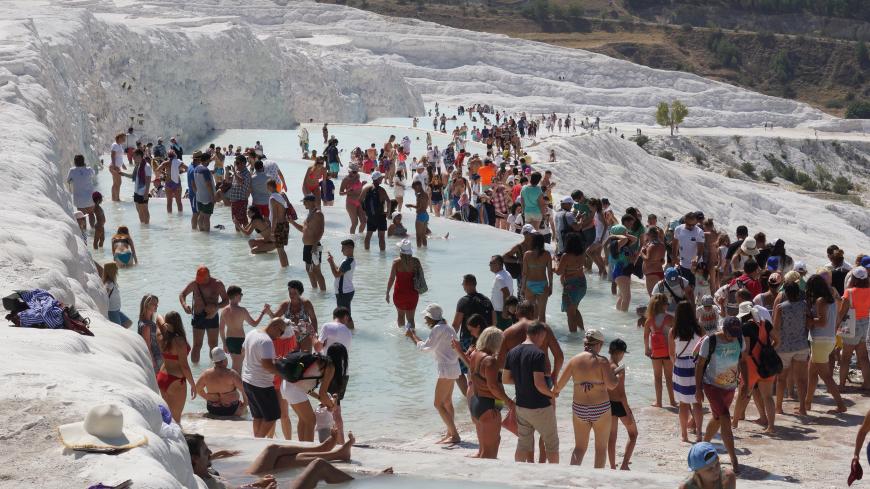 Hierapolis is the most popular archaelogical site in Turkey, with its peak of 2 million tourists in 2014 and a comparable number anticipated for 2018. In fact, most of them — largely Russians on day trips from Antalya — see only the natural features of the place: the white cascades of travertine created by thermal waters flowing downhill. The venue is better known in Turkish as Pamukkale, literally the “cotton castle,” whose light blue natural pools are featured in every tourism brochure.

They pay for both — there is no separate entrance, as the nature and history are deeply intertwined — but only a small fraction of the visitors go inside the Hellenistic and Roman ancient city, founded on a seismic fault line and hot springs by the Phrygian people. Few tourists walk the paved roads among the ruins or sit in the well-preserved theater. Fewer still are adventurous enough to climb the steep hill overlooking Pamukkale and Hierapolis — guides apparently advise against going there — where the Christian St. Philip the Apostle was killed, buried and venerated for many centuries.

The exact location of his tomb was revealed in 2011 by Francesco D'Andria, who recently retired from directing the Italian archaelogical mission for 15 years after 25 as team member. He talked to Al-Monitor about his experiences excavating and studying the site with an international and interdisciplinary team, restoring its monuments, opening it up to visitors and offering solutions to neutralize the worst effects of mass tourism. Thick volumes published by Ege Publishing House document them in detail.

Hierapolis/Pamukkale, a spectacular combination of man-made and natural wonders, was added to the Unesco World Heritage List in 1988. Only after that date did the Turkish government start protecting it. Five spa hotels operating along the edge of the pools were demolished, the archaelogical area fenced off and closed to buses and private cars. “It may sound absurd today, but in the 90s traffic along the funerary monuments of the northern necropolis reminded me of Istanbul at rush hour," D'Andria told Al-Monitor.

In addition to St. Philip's resting place (where no human remains are still present), his other major discovery is the "Ploutonion," the famous sanctuary dedicated to the god of the underworld, built on a cave that emits carbon dioxide in deadly concentrations and long considered to be a gate to hell. Spectators watched as bulls were sacrificed from an arena with large marble steps. D'Andria said of an ancient Greek historian who visited the site around 2,000 years ago, “Strabo had written about birds killed by gases. One day I noticed many dead birds and I started excavating there. This is how I located the temple in 2013.” He described the thermal spring that created the travertine cascades and feeds the pools as “a white heaven literally springing from hell."

archaelogists found inscriptions with dedications to other infernal deities, a statue of the three-headed dog Cerberus with two heads missing and a colossal marble statue of Pluto himself without a head, arms or legs (probably smashed by the Christians of ancient Hierapolis). Thanks to funding from the Vehbi Koc Vakfi Foundation and Tofas, the Italian team was able to reconstruct the theater and commission a 3D-printed reproduction of the statue of Pluto, completed with head and limbs cloned from a smaller copy in the Hierapolis archaelogical Museum. It now stands in the place of the original, three and a half meters tall, along with Cerberus. A fence will prevent tourists from getting too close to the cave and its killer gas.

The Turkish authorities' desire to exploit the site for tourism led to improper use of the monuments. The Roman theatre is a case in point. It was restored by the Italian mission and had part of the monumental stage reconstructed (only the first third of the vertical structures). D'Andria said, “Everything was made as fast as possible and not with the best materials available because the Ministry of Culture and Tourism had already organized a concert by the pop singer Ajda Pekkan and the deadline of June 2013 could not be missed."

As the theatre hosted other concerts and TV shows in the following months, the equipment damaged the orchestra flooring, breaking some of the marble slabs. “They insist too much on reconstructing ancient monuments. I even had a digital model of the entire theater with the three levels of the stage put back in place but I didn't dare reveal it to Minister Ertugrul Gunay. I was afraid that he would ask me to build it anew," he added wryly.

The Italian archaelogist is not against mass tourism, but he would prefer more of what he calls “slow, quality” tourism: people who spend more time among the monumental ruins and visit the whole city, who learn about how the ancient world functioned. To this end, he devised an alternative route to St. Philip’s Hill that skirts the thermal area. He has also suggested an “archaeo-seismological” itinerary that explores and explains unique geological phenomena and the effects of earthquakes on monuments.

The end point of this second path is the open-air pool of the Richmond Pamukkale Thermal Resort (previously called “Cleopatra's baths"), where people can swim for a fee over the ruins of the agora. The structures collapsed in the Middle Ages because of an earthquake and the space was flooded by the hot spring water.

According to D'Andria, "slow tourism" needs more facilities: a new archaelogical museum, for example. The old and small antiquarium full of sculptures inside the Roman baths-turned-church is not adequate. He has in mind “a museum in which the history of the city is told in social, political and religious terms, with extensive use of virtual reconstruction and animation, presenting the most recent scientific discoveries with modern techniques."

It would explain the role of Hierapolis — "holy city" in Greek — as a center of pilgrimage over two millennia: first pagan (the Ploutonion, the temple of Apollo), then Christian (St. Philip) and finally secular, while instilling respect for its sacred origins.