Turkey could be seriously sidelined by a highly effective operation undertaken recently by Syrian forces. 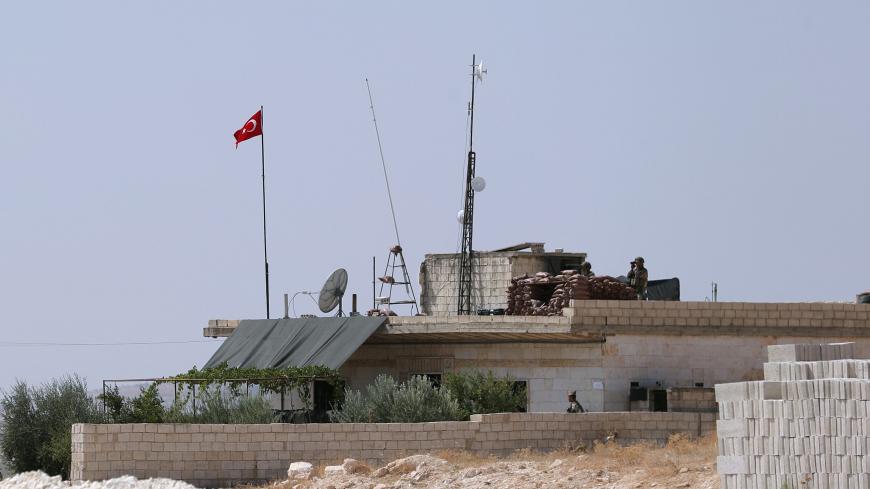 The offensive launched Dec. 19 by Syrian President Bashar al-Assad — supported by Russia and Shiite militias — has made unprecedented gains against Turkish-backed rebel forces in Idlib province. Assad's combined forces left the general area of Umm Jalal and Khuraybah, roughly 50 kilometers (31 miles) southeast of the center of Idlib city, and in only four days captured about 40 villages.

This operation is increasingly sidelining Turkey from the Idlib game. The forces encircled Turkey’s observation point at Surman on Dec. 23. (The Morek observation post was surrounded during another operation almost three months ago.) Two more posts are on the line: A UN humanitarian office reported Dec. 26 that Maaret al-Numan city and the surrounding area in southern Idlib was "almost empty" as residents had fled, and Turkey’s outpost at Tal Tukan village was also threatened. Controlling Maaret al-Numan means controlling southern Idlib and the critical M-5 highway to Aleppo.

Assad’s forces had carried out their “Dawn of Idlib” campaign from May 6 to Aug. 31. That operation concluded with the capture of the critical Morek-Latamine line in the region's south, yet with no clear military victory. Operational factors that stalled this operation could have been disciplinary problems, wrong tactical moves, Russia-Iran conflict and coordination setbacks, lack of fire support and limited human resources.

In late August, clashes in the region did not stop immediately. For some time there was calm in the region, except for sparse airstrikes that intimidated civilians. However, this pause was for the Sochi meeting between Turkish President Recep Tayyip Erdogan and Russian President Vladimir Putin.

On Oct. 22, Erdogan and Putin reached an agreement in Sochi on the situation east of the Euphrates, while Assad visited the Idlib region, where the military forces were making major efforts to take over. This visit was the clearest sign that the operation would start again in Idlib.

And then the operation changed direction from northwest to southeast. One of the most important indicators of this was Russia's shift of aerial bombardments, which caused large numbers of civilians to flee the area. By early November, Russia launched the most lethal airstrikes since the cease-fire. Dozens of civilians lost their lives and thousands fled.

The Syrian army began to advance south of Idlib on Nov. 14 without announcing any official operation. Assad's forces took the villages of Garibe, Luveybide, Tel Kineze, Musherife, Um al-Khalil and Zarzur from Nov. 14-23. Although it is a small area, it was vital in paving the way for the current operation. In this second wave, Russia employed a method it had not previously used: Airplanes and missiles attacked refugee camps inhabited only by civilians who had not even been involved in the conflict zone and had fled.

At the end of the second wave, the Syrian army greatly fortified its presence in the region. On Dec. 19, Syrian authorities announced the start of the operation called “Dawn of Idlib 2.”

This operation has several linked strategies. The first is to control the critical M5 and then the M4 highway to isolate Idlib's city center, currently held by Hayat Tahrir al-Sham and some Turkish-backed armed groups. The second goal is to expel Sunni armed groups, their families and civilians from the Idlib region to Turkish-controlled areas in the north. The next move will be to eradicate Sunni opposition in the region. The operation does not particularly target the center of Idlib, but rather strategically significant locations that can be captured tactically.

This new approach of “divide and capture” with small tactical moves seems to be working this time; Assad’s forces could capture almost 20% of opposition-controlled areas in northwest Syria in very short order.

What are the factors leading to operational success in this new operation?

First, when Ankara changed its center of gravity from northwest to northeast with Operation Peace Spring, it caused significant operational, intelligence and logistic setbacks for the opposition. Local sources note the opposition did not resist strongly along the front line because Ankara didn't support it.

The second factor for success so far is the units involved in the operation. In contrast to the previous operation, Assad’s army this time relied on the 25th Special Operations Union (former Tiger forces) and its affiliated paramilitaries, Jerusalem Brigade elements and Russian mercenaries. These units achieved an effective chain of command and coordination this time.

Furthermore, pro-Iran militia groups, which did not support the previous operation until the last moment, this time provided both personnel and drone support from the operation's initiations. Also, enhanced night and thermal vision capabilities have enabled Assad's forces to keep operational tempo high.

Finally, it should be noted that the Russian and Syrian air forces have combined their attempts to strike civilian settlements. This situation increases civilian movement, which in turn leads to a large wave of internal migration.

However, “No matter what the risks may be, we cannot withdraw our soldiers before a political compromise is reached,” a security official with close knowledge of the matter told Al-Monitor when asked why vulnerable Turkish outposts haven't been evacuated.

Ankara is determined to keep Turkish soldiers in northwest Syria to remain in the game. With the current pace of operations, besieged Turkish soldiers could be used as bargaining chips against Ankara, though Turkish officials don’t believe this is likely.

For Ankara, the most important Syrian issue now is the refugee flow that may arise. There's a high risk that tens of thousands of refugees will flee to the Turkish-controlled northern areas and into Turkey.

But, given that Libya is now a priority for Turkey, the Idlib crisis and refugee flow aren't Ankara’s top concerns. Ankara’s perspective can be summarized in three points: The refugee flow from Idlib is still manageable, Assad’s forces still have capability problems and Moscow’s strategy is to use Idlib as leverage against Ankara.

One can expect the recent operation to decelerate just before Putin visits Turkey on Jan. 8, yet Assad’s army will seek to control Idlib piece by piece with gradually developing tactical moves. Therefore, the process in Idlib will be extended over the long term. That is, after a few weeks of the current operation, a new cease-fire should be expected in mid-January until clashes resume at the next "appropriate" time.