Will Libya become Turkey’s next Syria?

The recently signed Turkey-Libya military cooperation deal and maritime delimitation agreement threatened to raise tensions not only in Libya but throughout the Eastern Mediterranean with Turkey asserting the right to intervene militarily in Libya if requested and to drill for oil and gas. 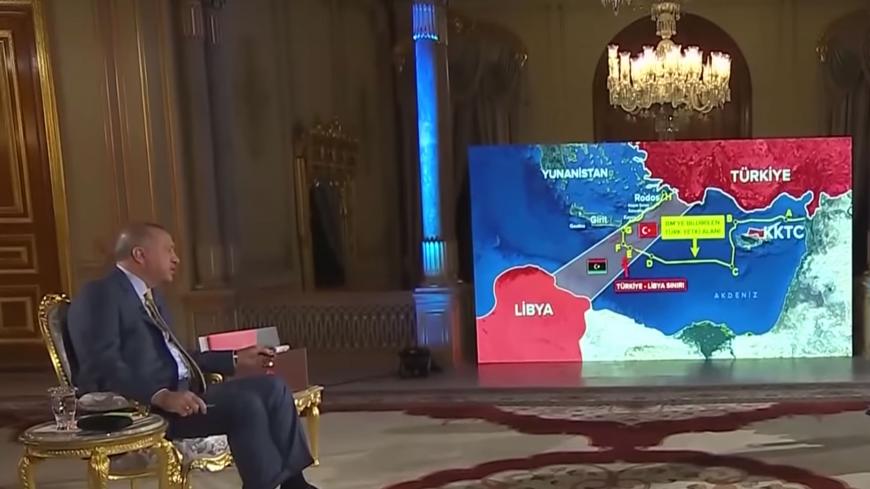 In a still from a video, Turkish President Recep Tayyip Erdogan gives an interview on TRT television during which he spoke about Turkey's relationship with Libya, Dec. 9, 2019. - YouTube/Türkiye Gazetesi

Turkey appears to be preparing a surprise move in Libya after recent diplomatic traffic between Ankara and Libya's UN-recognized Government of National Accord (GNA).

In a televised interview on state-run TRT on Dec. 9, President Recep Tayyip Erdogan unexpectedly asserted that the signing of a military cooperation agreement with the GNA on Nov. 27 along with an agreement delimiting a maritime border between Turkey and Libya gives Turkey the right to deploy soldiers in Libya “if invited by the people of Libya and the Government of National Accord.”

Erdogan said if Khalifa Hifter, the rebel general leading a military uprising against the GNA and who has the backing of Russia, Egypt and the UAE, were to succeed, Libya could become “another Syria.” Erdogan said this issue will be the primary item on his agenda when he meets with Russian President Vladimir Putin Jan. 8 in Turkey.

The GNC Presidential Council and Turkey’s parliament approved the maritime agreement unusually quickly, and Ankara has already filed for ratification with the United Nations. The defense and security cooperation agreement was submitted to the Turkish parliament in the past few days to go through the necessary legislative procedures.

The maritime agreement demarcates an 18.6-nautical mile line as the maritime boundary separating the two countries’ respective self-declared exclusive economic zones (EEZs). These EEZs overlap Greece’s self-declared EEZ, which extends about 15,000 square miles to the south and southeast of the Greek island of Crete. The Turkey-Libya boundary overlaps Greece’s EEZ northeast of Crete. Some argue that the resulting boundary overlaps with other nation's declared zones render the agreement illegitimate and invalid.

According to the military cooperation agreement, Turkey will initiate a comprehensive training and equipment program in Libya after the establishment of a Rapid Reaction Force for police and military functions. If requested, a joint Office of Defense and Security Cooperation can be established, which is perhaps the legal basis for Turkey’s potential deployment of troops to Libya. The agreement also authorizes joint activities between GNA and Turkish forces in the areas of military intelligence and maritime patrols and surveillance. Turkey has agreed to cover all expenses stemming from implementation of the agreement.

Meanwhile, Ankara is ready to conduct deep sea drilling with the GNA or by itself in Libya's EEZ and is considering procuring a third ship for such exploration. Its Fatih is currently carrying out exploratory drilling in the Gulf of Carpentaria, east of Cyprus, and the Yavuz is doing exploratory drilling in an area close to the Greek Cypriot Block 7.

If necessary, Ankara is prepared to use gunboat diplomacy around Cyprus and south of Crete in the Libyan EEZ to defend the rights it now asserts based on the Nov. 27 agreement. Ankara claims to be ready to dispatch a task force of one frigate, several patrol boats and submarines. At the same time, it is open to negotiations with Greece and Egypt to search for a diplomatic solution to problems stemming from the boundary in the maritime agreement.

In short, Ankara’s approach to the Eastern Mediterranean is that with gunboat diplomacy and its military prowess, it won’t allow the hatching of a game plan that sidelines Turkey. All the actors that matter in Ankara — Erdogan, those around him and the security and intelligence bureaucracies — have reached a consensus on supporting gunboat diplomacy to back Turkey’s strategic interests in the Eastern Mediterranean.

The Anadolu, Turkey’s first multipurpose assault ship, will be fully operational in late 2020. Turkish security experts say that it will be deployed southeast of Crete to enforce the agreements with Libya and protect Libya's maritime zones against Greek violations in its view. in short, Ankara appears willing to deploy gunboat diplomacy around Cyprus to the Crete-Libya maritime border.

A security source indicated to Al-Monitor that after a Dec. 15 meeting in Istanbul between Erdogan and GNC President Fayez al-Sajjar, the Turkish military had begun preparations to send troops to Libya. The government has instructed the military to begin work on the ships and planes needed for the first deployment, which will include two or three naval underwater assault and defense teams and a company from the Turkish Marine Brigade (around 100 soldiers). The source explained, “The deployment will be limited to providing training and consultancy services to the GNA without any combat mission, and the deployment might be carried out in two weeks.”

The question now is how serious Ankara is about militarizing the Mediterranean situation and possibly escalating to military confrontation. According to two security experts and one energy expert in Ankara, it is “serious, very serious.”

It is not clear that Ankara engaging militarily in Libya will deter Hifter or halt his forces' advance. That said, one should bear in mind that in the thinking of Erdogan and his political decision-maker associates and the security bureaucracy, Libya is rapidly becoming a new Syria, and they do not want to make the same mistakes in Libya. Given this, Turkey should commit itself preemptively, including militarily if necessary, and support the GNA to the end.

Of note, Erdogan’s close ideological ties to the GNA, which has affiliations with the Muslim Brotherhood, and the geopolitical concerns of Turkey’s security bureaucracy about the Eastern Mediterranean are mutually reinforcing. In the past, the two have usually disagreed on Libya.

Moscow is actively supportive of Hifter, and Ankara now needs to ascertain the stance of the United States and the Europeans, especially France, Germany, Italy and the United Kingdom, which in recent weeks have been exhibiting a pro-Hifter attitude. The Donald Trump administration is in contact with Hifter while keeping mum about Turkey’s relations with the GNA. The lack of a US reaction, either pro or con, to the Turkey-Libya accords is puzzling. Would the United States one day support an alliance with Turkey against Russia in Libya or opt to back Hifter?

This situation brings to mind the alliance debates in northern Syrian in 2014. At that time the Barack Obama administration in cooperation with Turkey and Qatar launched a train-and-equip program for local elements to topple President Bashar al-Assad. We all know how that turned out.

Does Erdogan’s assertion that Turkey can send soldiers to Libya if a request is made point to an alliance on Libya in the making? More important, where does the United States stand on Libya? It is unlikely the world will have to wait very long to find out.