A top Trump administration Iran official praised a de-escalation proposal by Yemen’s Houthi rebels amid apparent progress in Saudi-Houthi talks to end the war in Yemen. 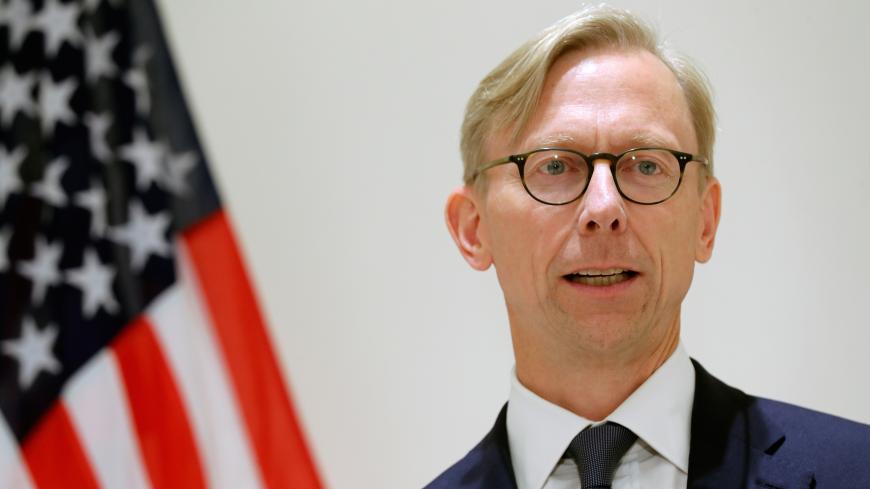 In a shift that analysts said reflects progress in Saudi talks with Yemen’s Houthi rebels to end the Yemen war, State Department Iran envoy Brian Hook said today that Iran does not speak for the Houthis, whom he described as playing a more constructive role in issuing a cease-fire proposal.

“We should recall that the Houthis proposed a cessation of missile and air attacks with Saudi Arabia just days after the Iranians struck Saudi oil installations on Sept. 14,” Hook told journalists at the State Department.

“The Houthis’ de-escalation proposal, which the Saudis are responding to, shows that Iran clearly does not speak for the Houthis, nor has the best interests of the Yemeni people at heart,” Hook said. “Iran is trying to prolong Yemen’s civil war to project power. Iran should follow the calls of its own people and end its involvement in Yemen.”

Hook’s comments praising the Houthi de-escalation proposal stand in contrast to how he described the Houthis, in a September Wall Street Journal op-ed, as an Iranian proxy group. He further characterized the Iranian-Houthi relationship as a “strategic alliance.”

“Iran’s strategic alliance with the Houthis allows them to target Gulf nations at will with missile and UAV attacks, and to inspire, organize, and direct militant separatist groups in Saudi Arabia’s provinces,” Hook wrote in the Wall Street Journal. “The Houthis have launched Iranian-origin missiles at population centers such as Riyadh, hundreds of miles away.”

Hook's currently expressed view of the Houthis now more closely aligns with the long-standing, more nuanced assessment of the Yemeni group held by officials in the State Department’s Bureau of Near Eastern Affairs. They also reflect apparent progress in Saudi-Houthi talks, as the Saudis seek to accelerate efforts to unwind their military involvement in Yemen, analysts told Al-Monitor.

“Look, we have said all along that the Houthis are pursuing Houthi objectives,” former US Ambassador to Yemen Gerald Feierstein told Al-Monitor, reflecting the view more generally held by his former Bureau of Near Eastern Affairs, of which he served as principal deputy assistant secretary of state. “And the fact that they cooperate with the Iranians, and the Iranians help the Houthis because the Iranians see advantage in using the Houthis to pressure Saudi Arabia, all of that is true. But the Houthis have never been proxies of Iran. They never followed Iranian leadership guidance.”

“The ground has shifted since September 14,” said Feierstein, now with the Middle East Institute, referring to the date of a sophisticated drone and missile attack on Saudi oil facilities that the United States and three key European powers have attributed to Iran. “And the fact is, you have the Saudis now negotiating with the Houthis.”

“Let me be clear about this also: The Saudis and the Houthis have always been talking,” Feierstein added. “What has been changed, is the Saudis coming out publicly, saying, ‘Oh, by the way, we have a dialogue going with the Houthis.’”

The progress in Saudi-Houthi dialogue has come as Saudi Deputy Defense Minister Khalid bin Salman, the former Saudi ambassador to the United States and brother of Crown Prince Mohammed bin Salman, has taken the lead on the Yemen file, former diplomats and analysts told Al-Monitor. Bin Salman — often referred to by his initials KBS — traveled to Oman two weeks ago, where he met with Oman’s Sultan Qaboos, whose government has quietly tried to mediate between the Saudis and Iran, particularly on Yemen.

A priority for KBS is to get the Saudis out of Yemen before the US 2020 presidential election campaign goes into full swing. The controversial Saudi role in Yemen, as well as the killing of Saudi journalist Jamal Khashoggi, could become a top foreign policy campaign issue, especially among Democratic candidates.

“The Saudis, of course, have an eye on American politics and the 2020 presidential election,” Peter Salisbury, a Yemen analyst with the International Crisis Group, told Al-Monitor. “And they will not want to be the chief talking point in foreign policy debates.”