US officials welcomed a Yemen truce that went into effect April 11 after quiet Saudi-Houthi negotiations had already reduced violence in the year-old conflict, and urged the parties to find a political resolution at April 18 peace talks in Kuwait. 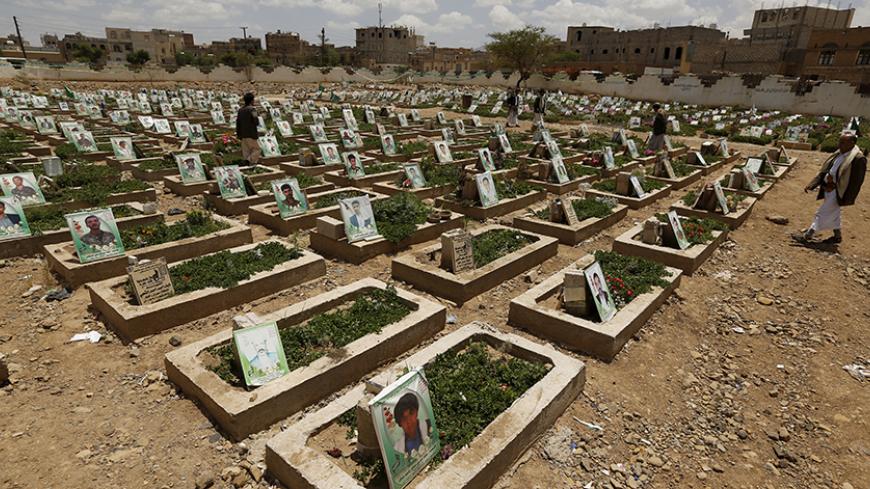 People tour a graveyard for Houthi fighters killed in recent fighting during the first day of a cease-fire in Yemen's capital, Sanaa, April 11, 2016. - REUTERS/Khaled Abdullah

WASHINGTON — The United States and United Nations strongly welcomed a Yemen cessation of hostilities that went into effect early April 11, and urged all the warring parties to find a political resolution to the year-old conflict at UN-brokered peace talks set to start in Kuwait on April 18.

“We encourage all parties to attend [the peace talks in Kuwait] and engage in good faith to find a sustainable way forward,” State Department deputy spokesman Mark Toner told journalists at a press briefing April 11. “The only way forward is a political one.”

"This is critical, urgent and much needed. Yemen cannot afford the loss of more lives," UN special envoy for Yemen Ismail Ould Cheikh Ahmed said in a statement April 11.

Even amid reports of violations in its first day, the nationwide truce went into effect after there had been a notable reduction of violence in Yemen in recent weeks, following quiet Saudi-Houthi negotiations on reducing violence on the Yemeni-Saudi border, US officials told Al-Monitor. The tentative progress on resolving the Yemen conflict comes as US President Barack Obama is due to travel to Saudi Arabia for consultations with Saudi and Gulf Cooperation Council leaders next week, on April 21.

“The level of violence is significantly below where it has been over the last year,” a senior US official, speaking not for attribution, told Al-Monitor on April 8. “The situation, particularly on the border between Saudi Arabia and Yemen … has been much quieter.”

“We have certainly encouraged … steps forward by the parties themselves” to de-escalate the conflict and get back to peace talks, the US official said.

Low-key contacts between the Saudis and Houthi rebels appear to have had a breakthrough in recent weeks, leading to a partial cease-fire on the Saudi-Yemeni border. Such de-escalatory steps helped make way for the effort to relaunch the peace talks and try to expand to a nationwide cease-fire.

The US official indicated that that there have been “very low-key contacts between the two for quite some time, going to the beginning of the coalition campaign,” making reference to the Saudi-led coalition war in Yemen. “Earlier this spring, it began to bear fruit.”

Secretary of State John Kerry was informed by the Saudis of apparent progress and had hopes that the Yemen conflict would be winding down when he traveled to the kingdom March 12, at the conclusion of a major Saudi-hosted “Northern Thunder” military exercise in Hafar al-Batin, officials said.

“When the secretary was in Hafar al-Batin (Saudi Arabia) … last month, for the first time, … the pieces were just beginning to fall in place at that moment” for renewed Yemeni peace talks, the source said. “He got a full debrief from the Saudis at that time.”

Kerry alluded to quiet progress toward ending the Yemeni conflict after meeting with Saudi King Salman bin Abdul-Aziz Al Saud and his advisers on the sidelines of the military exercise, held at the King Khalid Military City base, 500 kilometers (310 miles) northeast of Riyadh.

“We discussed Yemen, where we have agreed to work even more closely together in the next days to explore the possibilities of the political solution, and we both agree that it would be desirable to see if we can find a similar approach as we did in Syria to try to get a cease-fire,” Kerry said after meeting with Salman, Crown Prince Mohammed bin Nayef, Defense Minister Mohammed bin Salman, Foreign Minister Adel al-Jubeir and UAE Foreign Minister Abdullah bin Zayed al-Nahyan on March 12. “So we’re going to continue to work on that quietly, and we have a team of people who are going to continue to be working together to that effect.”

US officials said they were cautiously optimistic about prospects for progress at the Yemen peace talks set to start in Kuwait next week; they will be convened by Cheikh Ahmed and his UN team.

Cheikh Ahmed “is reasonably optimistic that, in fact, he will be able to have a serious way forward this time, and that hopefully there will be, as a result of this round of talks, an agreement on getting to political transition, a way forward,” the US official said.

Yemen expert Adam Baron said that the latest peace effort is more hopeful than earlier rounds, but that it was still very fragile and could be quickly reversed.

“There are signs… [of] much more of a willingness to entertain the possibility of things moving from the military track to the political track” this time, Baron told Al-Monitor in a phone interview from Lebanon on April 11. “But it is very fragile. It is riding on the cease-fire [holding] and how the Kuwait talks go.”

“Any de-escalation can get reversed in a second, and if reversed, we will see a flare-up worse than before,” Baron said. But “this time [may be] a tentative opportunity for things to be moving in the right direction.”