Intel: How US just contradicted its own justification for arming the Saudis in Yemen

A key State Department official portrayed the Houthi rebels as independent from Tehran in a briefing with reporters on Thursday, a significant shift that flies in the face of years of US justification for its role in the war in Yemen. 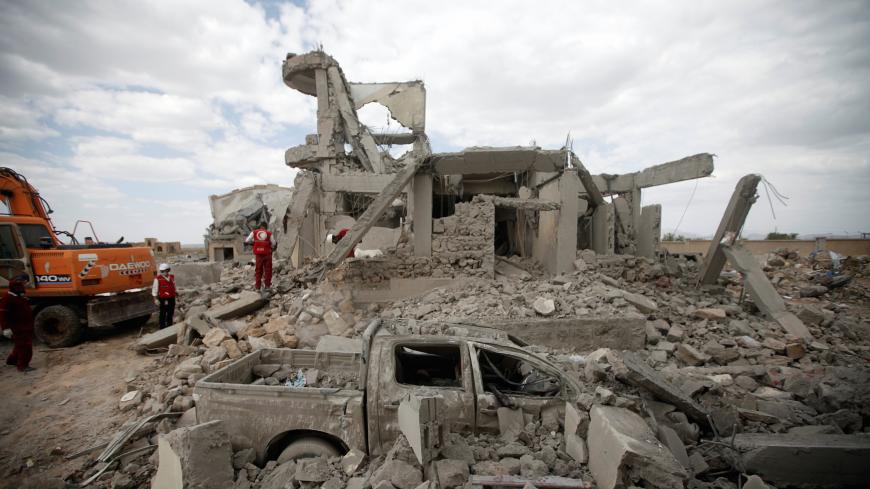 A destroyed car is seen between rubble as Red Crescent medics inspect the site of Saudi-led air strikes on a Houthi detention centre in Dhamar, Yemen, Sept. 1, 2019. - REUTERS/Mohamed al-Sayaghi

A key State Department official portrayed the Houthi rebels as independent from Tehran in a briefing with reporters on Thursday, a significant shift that flies in the face of years of US justification for its role in the war in Yemen.

“The Houthis’ de-escalation proposal, which the Saudis are responding to, shows that Iran clearly does not speak for the Houthis, nor have the best interests of the Yemeni people at heart,” the department’s Iran coordinator Brian Hook told reporters at the State Department. “Iran is trying to prolong Yemen’s civil war to project power.”

Why it matters: Since 2015, both the Barack Obama and the Donald Trump administrations — as well as a bipartisan coalition of Iran hawks in Congress — have used Tehran’s support for the Houthis to justify continued support for the Saudi-led coalition in Yemen despite the civilian death toll. The coalition’s defenders have sought to paint the Houthis as direct agents of Iran, rather than autonomous actors.

“The Houthi militia, which is Iran’s proxy in Yemen, is attacking Saudi Arabia’s southern border,” the late Sen. John McCain, R-Ariz., then the chairman of the Senate Armed Services Committee, insisted during a Sept. 2016 debate on an arms sales to Riyadh. “It has carried out hundreds of cross-border raids into Saudi Arabia and has fired numerous missiles deep into Saudi territory. Make no mistake, this aggression is fueled by the Iranians.” The motion to stop the sale failed 27-71.

Most recently, Hook wrote a Wall Street Journal op-ed asserting that Iran’s support for the Houthis allow it to “effectively [extend] its borders” and accused the news media of doing “a poor job of reporting on Iran’s role in intensifying and prolonging the tragic conflict in Yemen.” And in May, Trump used Tehran’s support for the Houthis as the bulk of the justification for an Iran emergency declaration in a bid to bypass Congress on arms sales to Saudi Arabia. The justification accused Iran of directing “repeated attacks on civilian and military infrastructure in Saudi Arabia and the United Arab Emirates.”

Mixed messages: Former US diplomats insist that the Houthis’ independence from Iran was always well known.

“Look, we have said all along that the Houthis are pursuing Houthi objectives,” Gerald Feierstein, who served as ambassador to Yemen from 2010 to 2013, told Al-Monitor this week. “And the fact that they cooperate with the Iranians, and the Iranians help the Houthis because the Iranians see advantage in using the Houthis to pressure Saudi Arabia, all of that is true. But the Houthis have never been proxies of Iran. They never followed Iranian leadership guidance.”

What’s next: Hook’s new emphasis on the supposed strategic rift between Iran and the Houthis indicates that the Trump administration is likely to do more to push the Saudi-led coalition and the Yemeni government to resolve the bloody war through peace negotiations than it previously has. It could also lend further ammunition to the ever-growing efforts on Capitol Hill to block Saudi arms sales – legislation that Trump has repeatedly vetoed.