Lawmakers are lining up behind the US ally despite fears of another sectarian proxy war. 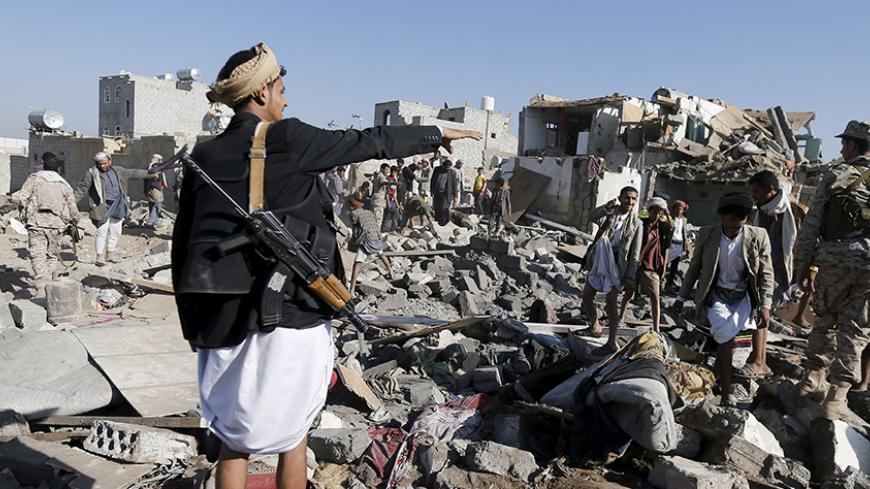 An armed man gestures as he stands on the rubble of houses destroyed by an airstrike near Sanaa airport, March 26, 2015. - REUTERS/Khaled Abdullah

WASHINGTON — Congress and the Obama administration are backing Saudi Arabia's airstrikes in Yemen despite growing fears of another sectarian proxy war with Iran.

Lawmakers of both parties lost no time in justifying the Saudi-led intervention against Houthi rebels after deposed President Abed Rabbo Mansour Hadi fled his southern stronghold for Saudi Arabia on March 25. The statements of support echo similar comments by the Obama administration and suggest Riyadh won't endure much pressure about how it responds in its backyard — at least for now.

"I applaud the Saudis for taking this action to protect their homeland and to protect their own neighborhood,” House Speaker John Boehner, R-Ohio, said at a news conference. “If America leads, our allies in the region would be tickled to death and would be happy to join a coalition. But America has to lead."

"Saudi Arabia and our Arab partners deserve our support as they seek to restore order in Yemen, which has collapsed into civil war," the two hawks said in a joint statement. “We understand why our Saudi and other Arab partners felt compelled to take action. The prospect of radical groups like Al-Qaeda, as well as Iranian-backed militants, finding safe haven on the border of Saudi Arabia was more than our Arab partners could withstand."

The Obama administration has said it is providing "logistical and intelligence support" for the operations. National Security Council spokeswoman Bernadette Meehan justified the operations against the Houthis as having been requested by Hadi and Yemen's "legitimate government."

"While US forces are not taking direct military action in Yemen in support of this effort," she said in a statement, "we are establishing a joint planning cell with Saudi Arabia to coordinate US military and intelligence support."

"The takeover of southern Yemen by the Iranian-supported Houthis has led to chaos, threatening the national security interests of our regional partners and the United States," Royce said in a statement. "Regional states, led by Saudi Arabia at President Hadi’s request, are taking action from the air. The United States should support our Saudi and Gulf partners with appropriate logistical and intelligence support to combat this threat.”

Rep. Adam Schiff, D-Calif., the top Democrat on the Intelligence panel, said the Obama administration "made the right decision" in supporting the Saudi-led effort.

"The military action by Saudi Arabia and its partners was necessitated by the illegal action of the Houthi rebels and their Iranian backers," Schiff said. "But ultimately, a negotiated end to this crisis is the only way to restore order in Yemen and shrink the space for terrorism — all possible efforts must be made to advance this objective.”

"I support the efforts of the region, led by Saudi Arabia and a strong coalition of 10 nations, to launch airstrikes to stop Houthi military advances against President Hadi’s government," Kaine said in a statement. "I strongly urge the continued provision of US logistical and intelligence support to Gulf Cooperation Council-led military operations."

Kaine however warned that "allowing Yemen to spiral into civil or regional proxy war would not only provide an attractive opening for terrorist groups ... but also raise significant humanitarian concerns for the Yemeni people."

Already, Iranian Foreign Ministry spokeswoman Marzieh Afkham has warned that the Saudi-led "attacks would "expand terrorism and accelerate insecurity all over the region."

The Saudi effort appears to have at least nominal support from four other GCC countries — the United Arab Emirates, Qatar, Kuwait and Bahrain — as well as Egypt, Turkey, Morocco, Jordan, Sudan and Pakistan.

Great Britain has also endorsed the action. “We support the Saudi Arabian military intervention in Yemen following President Hadi's request for support by 'all means and measures to protect Yemen and deter Houthi aggression'," the Foreign Office said in a statement. "As the UN Security Council has made clear, President Hadi is Yemen's legitimate president.”

One of the few voices of caution has been EU foreign policy chief Federica Mogherini.

"I'm convinced that military action is not a solution," Mogherini said in a statement. "At this critical juncture all regional actors should act responsibly and constructively, to create as a matter of urgency the conditions for a return to negotiations."

Some experts agree that Saudi involvement may only make matters worse. Speaking at a Senate Armed Services Committee hearing earlier this week, Kenneth Pollack of the Brookings Institution warned that the worst case scenario would see Riyadh getting sucked in to a neighbor's civil war and destabilized just as happened with Pakistan in Afghanistan.

"The only country willing to intervene in Yemen is Saudi Arabia, which probably lacks the capacity to do so effectively," Pollack testified. "Indeed, the greatest danger stemming from the Yemeni civil war may be the kingdom’s determination to intervene there to try to stave off spillover from the civil war."

That warning seems so far to have fallen on deaf ears as the Saudi-led strikes offer the appearance of Arab states taking charge amid increasing turmoil across the Middle East.

"The takeover of large swaths of Yemen by Iranian-backed Shia militants has forced our Saudi allies to take military action. Months of fairy-tale negotiations and appeasement by this administration have led Iran to believe that it can act with impunity on an international scale," said House Foreign Affairs Committee member Darrell Issa, R-Calif. "We must make it clear that we will support our allies and punish our enemies through steadfast resolve and decisive action.”