Democrats' victory in the House could impact US policy on Iran, Syria and Yemen. 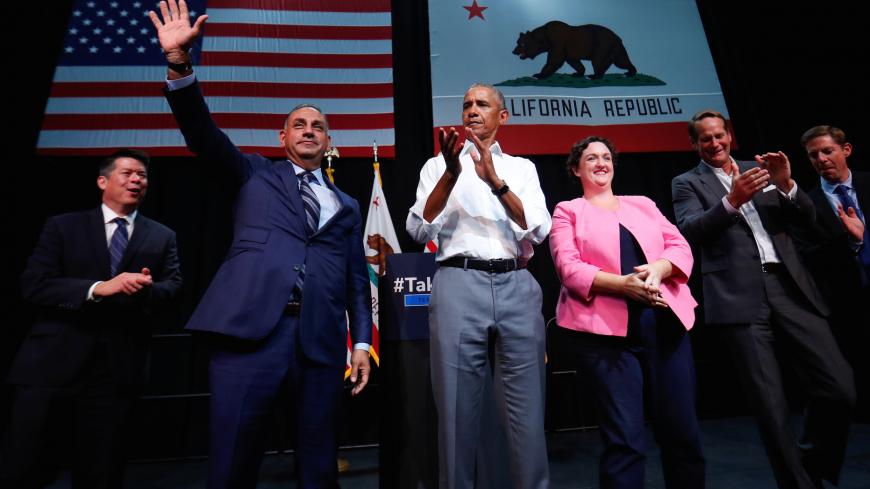 Update: This story was updated on Nov. 7, 2018 after Democrats won the House in the mid-term elections.

Democrats are looking to push back against Trump as he stands in lockstep with Saudi Arabia, an increasingly controversial ally, to pursue his hard-line Iran strategy. And the wars in Yemen and Syria are set to take center stage.

Saudi Arabia’s murder of journalist Jamal Khashoggi and the devastating Saudi-led campaign in Yemen have created unprecedented bipartisan pushback against Riyadh. But Democrats are currently signaling a willingness to go a step further than most of their Republican counterparts.

Increasingly frustrated with the massive humanitarian crisis and high civilian death toll resulting from the Saudi campaign against the Iran-backed Houthis, House Democratic leaders are also turning up the heat on Riyadh.

Democrats had gained a net 27 seats as of early this afternoon, giving them a total of 220 seats versus 194 for the Republicans. Another 21 races remain too close to call.

At a Defense News conference in September, Rep. Adam Smith, D-Wash., who is in line to become chairman of the Armed Services Committee, vowed to increase oversight of US military intervention abroad. He specifically singled out Yemen as a “major problem.”

“I don’t think we’re pursuing the right policy there in the way that we are backing Saudi Arabia and the UAE [United Arab Emirates] in a civil war that is leading to the largest humanitarian crisis on the planet,” said Smith.

Tellingly, Democrats who historically have been more supportive of Riyadh are also jumping on the bandwagon.

The No. 2 Democrat in the House, Steny Hoyer of Maryland, and the top Democrat on the Foreign Affairs Committee, Eliot Engel of New York, joined Smith in September in co-sponsoring a resolution that would cut the Saudis off from US midair refueling. The assistance is vital to Riyadh’s aerial war against the Iran-backed Houthi rebels.

The Trump administration adamantly opposed a similar effort last year and Republican leaders forestalled a vote. But the Democrats' victory virtually guarantees a floor vote and a high chance of passage.

Since then, the Khashoggi murder has only given Democrats more reason to take a hard-line stance against the Saudis.

Multiple Democratic staffers have told Al-Monitor that they would like to see a stronger response to Khashoggi’s death from the Trump administration, noting that “everything is on the table.” This includes potentially curtailing — or even entirely cutting off — arms sales to Riyadh, an idea that is rapidly gaining bipartisan traction.

“As congressional leaders, we must show that the United States will stand up against injustices and human rights violations in any country, including our partner,” Smith and Engel said in a statement last month with top Intelligence Committee Democrat Adam Schiff, D-Calif. “We wish the administration would do the same.”

That was before Secretary of State Mike Pompeo’s announcement that the State Department would issue visa bans on 21 Saudi suspects in Khashoggi’s death. Pompeo also said the Trump administration is launching a congressionally mandated probe that could lead to sanctions. The Saudis have arrested 18 unidentified suspects in the murder, but it’s unclear to what extent the visa bans and arrests overlap.

And while Crown Prince Mohammed continues to deny his involvement, the US intelligence community increasingly believes he was responsible, according to the New York Times. Still, Trump has continued to emphasize the crown prince’s denial that he was involved in the murder, even as he accused Khashoggi’s killers of staging a poorly organized “cover-up.”

Trump has relied heavily on the Saudis to pursue a counter-Iran strategy in Syria as well. Reversing his earlier pledge to withdraw troops from Syria “relatively soon,” Trump in Septmber consented to keep US troops in the war-torn country to counter Iran. He also hopes to secure ground troop commitments from Saudi Arabia, the UAE, Qatar and Egypt, according to the Washington Examiner.

This too has been met with Democratic skepticism.

“The Trump administration can’t decide whether we’re in Syria to fight Iran or [the Islamic State] — and one of those answers is illegal,” Rep. Seth Moulton, D-Mass., the top Democrat on the Armed Services Committee’s oversight panel, tweeted last month.

Fearful that the Trump administration could expand its mandate to target Iranian forces and proxies in Syria, Democrats intend to revisit a contentious debate on the 2001 Authorization for Use of Military Force (AUMF) that serves as the legal justification for the campaign against the Islamic State. Congress has repeatedly failed to agree on a replacement AUMF over the past 17 years.

Even without an AUMF, Congress has other means to push back on Trump’s military pressure against Iran. Eight Senate Democrats — and Republican Rand Paul of Kentucky — have signed on to legislation from Sen. Tom Udall, D-N.M., prohibiting “kinetic military operations in or against Iran.”

Yet Democratic leaders are still likely to target Iran and its regional proxies with sanctions, even as they condemn Trump’s withdrawal from the nuclear deal.