With President Donald Trump set to blow off a deadline to assess Prince Mohammed’s role in Jamal Khashoggi’s murder, Congress is gearing up to pass several anti-Riyadh measures. 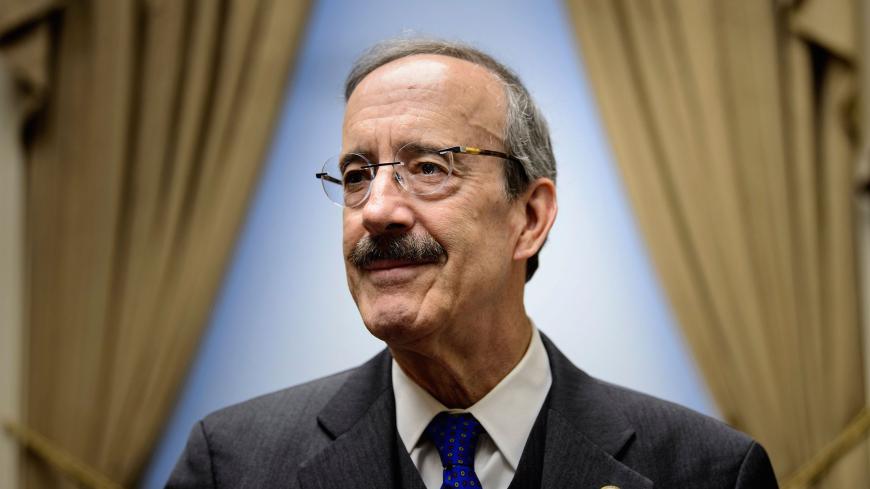 Rep. Eliot Engel, D-N.Y., poses for a portrait in his office on Capitol Hill, Nov. 15, 2018, in Washington. He has since become chairman of the House Foreign Affairs Committee. - GETTY/Brendan Smialowski

President Donald Trump appears set to blow off a congressionally imposed deadline requiring him to determine whether Saudi Crown Prince Mohammed bin Salman is responsible for the death of journalist Jamal Khashoggi.

The Trump administration has given no indication that it will complete the Khashoggi probe, which Congress launched last year, by its Thursday deadline. And a Senate aide told Al-Monitor that lawmakers aren’t holding their breath.

Instead, both chambers are doubling down on measures to hold Saudi Arabia to account for Khashoggi’s death and the war in Yemen.

Just today, newly empowered Democrats on the House Foreign Affairs Committee advanced a resolution directing the administration to end US support for the Saudi-led coalition in Yemen in a 25-17 party-line vote. The vote came immediately after Chairman Eliot Engel, D-N.Y., held the panel’s first hearing in the new Congress, which was dedicated entirely to the Arabian peninsula.

“The heinous murder of journalist Jamal Khashoggi shocked the world, and the administration seemed content to sweep it under the rug and move on,” Engel said during the hearing. “In addition, new reporting [from CNN] suggests that weapons the United States sold the Saudis and the Emiratis are now ending up in the hands of al-Qaeda terrorists, Houthi rebels and Iranian intelligence officials.”

After Congress launched a probe into Khashoggi’s murder last year, the Trump administration sanctioned 17 Saudi officials for their involvement in the assassination. But Riyadh had already arrested all of them while denying the crown prince’s involvement. That prompted the former chairman of the Senate Foreign Relations committee, Bob Corker, R-Tenn., and the ranking Democrat on the panel, Bob Menendez, D-N.J., to instruct Trump to investigate Prince Mohammed’s alleged role as part of the probe.

Asked for an update on the investigation into the crown prince, the State Department simply pointed to the sanctioned officials.

“The department continues to seek all relevant facts, consult with Congress and work to promote accountability for those responsible for Mr. Khashoggi’s death,” a State Department spokesperson told Al-Monitor.

Khashoggi’s murder last year capped off months of mounting bipartisan backlash against the Saudi coalition’s humanitarian conduct in its campaign against Yemen’s Iran-backed Houthi rebels, ultimately leading to today’s hearing and vote in the House.

Rep. Ro Khanna, D-Calif., reintroduced his resolution to end US support for the Saudi coalition last week after Republican leadership forestalled a floor vote last year in spite of expedited procedures laid out under the 1973 War Powers Act. But the Senate voted 56-41 to pass the same resolution in December.

While some Republican hawks joined their Democratic colleagues to pass the Senate bill last year, most of their House counterparts still aren’t on board, resulting in an unusual partisan fissure on the historically bipartisan Foreign Affairs Committee.

The panel’s top Republican, Rep. Mike McCaul of Texas, argued that using a war powers resolution to address the Yemen conflict would allow any member to “second-guess US security cooperation agreements throughout the world,” including Israel.

“This first markup is a departure from the strongly bipartisan cooperation that we’ve enjoyed on this committee,” McCaul said ahead of the vote. “Even our aerial refueling of Saudi jets — which does not constitute hostilities as traditionally understood — ended last November.”

Like McCaul, the Trump administration opposes the resolution and argues that US military support for the Saudis does not amount to US participation in hostilities. Still, Yahoo News reported last year that the Defense Department is conducting a classified operation to assist the Saudis against the Houthis, which may involve US ground troops. And The New York Times has reported that US soldiers are stationed on the Saudi side of the Yemen border.

While the resolution likely has enough votes to pass both chambers, it does not have enough support to withstand a possible veto from Trump. But lawmakers are still teeing up numerous other anti-Saudi bills.

In the Senate, Menendez plans to reintroduce his bipartisan Saudi Arabia Accountability and Yemen Act. The bill would sanction Saudi royals involved in the Khashoggi murder, permanently ban US refueling of Saudi coalition planes and suspend offensive weapon sales to Riyadh.

“International backing for [Prince Mohammed’s] military campaign in Yemen is essential to his credibility as a future ruler of Saudi Arabia,” said Kate Kizer, the policy director of Win Without War, a coalition of activist groups backing the anti-Saudi bills. “If the US cuts off weapons sales, other international backers of the campaign are likely to follow suit.”

Menendez had sought to attach his bill as an amendment to a broad Middle East legislative package, which the Senate passed 77-23 Tuesday, but Republican leaders did not put it on the floor. Additionally, Rep. James McGovern, D-Mass., who controls the House floor as chairman of the Rules Committee, has introduced a resolution banning arms sales, training, defense and intelligence cooperation with Saudi Arabia.

Meanwhile, appropriators in both chambers have agreed to cut Saudi Arabia off from the State Department’s International Military Education and Training Program, which they estimate could cause Riyadh to lose up to $30 million per year in savings on other military training programs.

“The US, along with other NATO allies, has quite literally built the Saudi military from the ground up, so the Saudis are essentially locked in the US hardware ecosystem,” said Kizer. “It would take decades for the Saudi military to transition to new aircraft and weapons systems.”