The House Foreign Affairs Committee unanimously advances a bill that would sanction Saudis involved in the Jamal Khashoggi slaying. 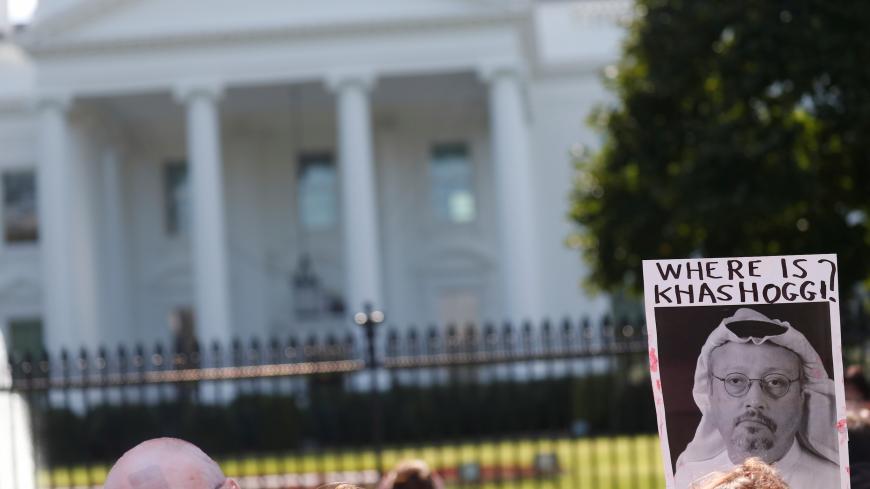 An activist holds an image of missing Saudi journalist Jamal Khashoggi during a demonstration calling for sanctions against Saudi Arabia and to protest Khashoggi's disappearance, outside the White House in Washington, Oct. 19, 2018. - REUTERS/Leah Millis

Congress made significant headway today on its long-awaited response to the Jamal Khashoggi murder in the form of Saudi sanctions legislation.

The bill requires the intelligence community to list every “foreign person” complicit in Riyadh’s assassination of Khashoggi at the Saudi Consulate in Istanbul, mandating sanctions for every individual on the list.

“Few dictatorships are brazen enough to reach out beyond their borders to kill their citizens living overseas,” Malinowski said ahead of the vote. “It’s important for us to remember that despite all of the controversy and anger following the case of Mr. Khashoggi, the Saudis do not appear to have gotten the message. Our intelligence community, since the killing of Khashoggi, has had to warn three individuals living overseas — including an American citizen living in the United States — of threats from the Saudi government.”

Despite the international backlash following the murder, the CIA warned three of Khashoggi’s former associates that Saudi Arabia may retaliate against them for their criticism of Crown Prince Mohammed bin Salman. They include Saudi critics and pro-democracy advocates Iyad el-Baghdadi in Norway, Omar Abdulaziz in Canada and a third person in the United States who wishes to remain anonymous.

The CIA has reportedly made the assessment that Mohammed ordered Khashoggi’s murder, placing the prince at risk of sanctions should Malinowski’s bill become law.

However, the bill provides an offramp by offering sanctions relief if the Saudi government completes a lengthy list of specific steps to improve its human rights record. These steps include the release of dissidents and political prisoners, ending the crackdown on free expression and peaceful dissent, abolishing the female guardianship system and permitting international oversight of its internal Khashoggi investigation.

Although no Republicans have co-sponsored the bill, the fact that Rep. Mike McCaul, R-Texas, did not object to the legislation and allowed it to advance to the House floor without a fight indicates the bipartisan frustration over the Donald Trump administration’s unwillingness to push back against Prince Mohammed for the murder.

McCaul took the rare step of rebuking the Trump administration in February after Secretary of State Mike Pompeo refused to comply with a legally mandated probe to determine whether the crown prince was complicit in Khashoggi’s assassination.

In an interview earlier this week, Trump again refused to investigate the crown prince’s role in the assassination, insisting that “it’s been heavily investigated.” Trump’s comments came days after the United Nations released a report finding “credible evidence warranting further investigation” of Prince Mohammed in the killing.

Still, it’s unclear whether Senate Majority Leader Mitch McConnell, R-Ky., will put the bill on the floor — where it would require 60 votes to pass — or if Trump would even sign legislation that implicitly rebukes his handling of the affair.

As such, Malinowski has filed his bill as an amendment to an annual defense authorization bill, which the House will vote on in July.

Democrats are also using the defense bill to take aim at the Saudi-led coalition’s campaign against the Iran-backed Houthi rebels. Rep. Ro Khanna, D-Calif., has filed an amendment that would defund US support for the coalition.

And Malinowski has a separate amendment that would require the president to suspend any licenses his administration has issued to transfer air-to-ground munitions for Saudi Arabia and the United Arab Emirates. The Trump administration drew further bipartisan scrutiny last month after it cited Iran to invoke emergency powers in a bid to bypass Congress on $8.1 billion in arms transfers involving both countries.

Last week this prompted the Senate to pass a series of resolutions blocking the emergency sales. The resolutions were introduced by the top Democrat on the Senate Foreign Relations Committee, Bob Menendez, D-N.J., who also introduced legislation to close the president’s emergency arms sale provision. The committee voted to advance the bill — the Saudi Arabia False Emergencies Act — Tuesday.