Congress divided over US military action in Iraq

Both Republicans and Democrats are split over whether the United States should use air power to assist Iraqi armed forces. 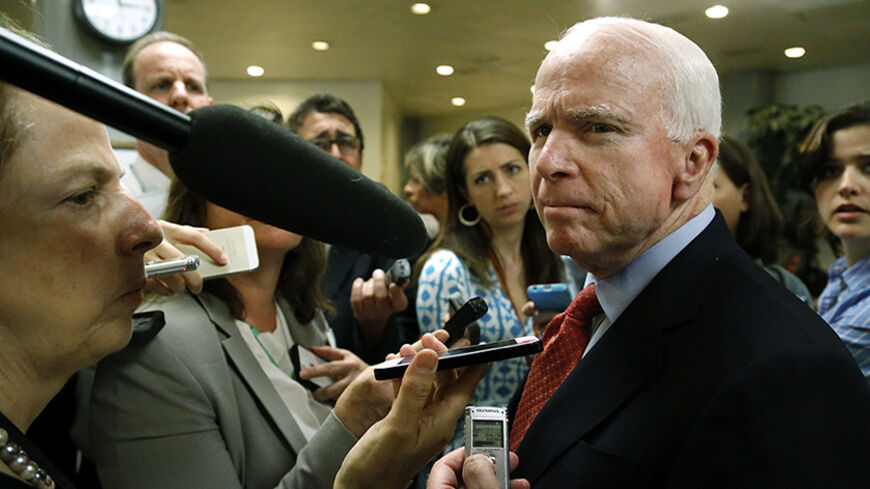 US Sen. John McCain, R-Ariz., (R) talks to reporters after a closed-door Senate Armed Services Committee briefing on the Bowe Bergdahl prisoner swap at the US Capitol in Washington, June 10, 2014. -

US lawmakers are deeply divided over whether to provide air support for the struggling Iraqi military in its fight against the Islamic State of Iraq and al-Sham (ISIS), blunting the pressure on the White House to move swiftly.

While a habitual group of vocal interventionists called for immediate action on June 12, many key lawmakers proved reluctant despite rapid gains by ISIS, an al-Qaeda spin-off.

President Barack Obama said June 12 that his national security team is "looking at all the options" but would not commit to any course of action.

"There is no scenario where we can stop the bleeding in Iraq without American air power," Sen. Lindsey Graham, R-S.C., told reporters after a closed Armed Services Committee briefing with Defense Department officials.

House Foreign Affairs Committee member and Iraq war veteran Adam Kinzinger, R-Ill., has been one of the most vocal proponents in the lower chamber.

"We've got to get involved with airstrikes, stiffening the spines of the Iraqis," Kinzinger told Al-Monitor. "If Baghdad falls, it's really hard to imagine a Middle East that looks like that."

Key leaders, however, rejected the idea out of hand.

House Foreign Affairs Chairman Ed Royce, R-Calif., urged the administration to launch drone strikes against ISIS — but made no mention of manned bombing runs. "The Iraqi government is far from perfect. President Maliki has been a big part of the problem. Only the Iraqis can control their future," Royce said in a lengthy statement. "But if we don't want to see an Iraq with large swaths of territory under militant control, and we shouldn't, we should answer Iraqi requests to target these al-Qaeda terrorists with drone strikes."

House Minority Leader Nancy Pelosi, D-Calif., told reporters at her weekly press conference that there is "no appetite in our country to be engaged in any military activity in Iraq."

"I don’t think this is our responsibility," Pelosi said.

And Senate Armed Services Chairman Carl Levin, D-Mich. — a proponent of creating a no-fly zone in neighboring Syria — said it's "unclear" that US airstrikes will help unless the Shiite Maliki mends rifts with Sunnis and other ethnic and sectarian groups in Iraq.

"While all options should be considered," Levin said in a statement, "the problem in Iraq has not been so much a lack of direct U.S. military involvement, but a lack of reconciliation on the part of Iraqi leaders."

The deteriorating situation immediately gave way to partisan finger-pointing. While Democrats slammed President George W. Bush for starting the war, Republicans placed the blame for the Islamist surge on President Obama's failure to strike a deal with Maliki to keep a residual US presence in the country after 2011.

Speaking to reporters after the Armed Services briefing, Sen. John McCain, R-Ariz., urged Obama to "get rid of his entire national security team" and replace them with Gen. David Petraeus and others he said "won the conflict in Iraq."

And House Speaker John Boehner, R-Ohio, said Obama has been "taking a nap."

"The president has celebrated our exit from Iraq as the hallmark of his foreign policy agenda," Boehner told reporters at his weekly press conference. "But our focus should be instead on completing our mission successfully. And I would urge the president once again to get engaged before it's too late."

Not all Republicans were as keen to place the blame on Obama, however.

"They had an opportunity — they had a chance," House Armed Services Committee Chairman Buck McKeon, R-Calif., said of the Iraqis. "We lost a lot of blood and a lot of treasure there, and gave them an opportunity and they wouldn't sign an agreement, they didn't want us there. Now they want us there."

"We're cutting our military," McKeon told Al-Monitor. "It's not good to start new adventures around the world."

The priority, he said, should be "getting our people out of there."

Others urged the administration to push for a NATO intervention.

"I think we ought to use the same formula that we used when we took out Moammar Gadhafi in Libya," Rep. Dutch Ruppersberger, D-Md., the top Democrat on the House Intelligence Committee, told Al-Monitor. "We have unique resources that no other country has, especially in the air. Intelligence and the ability to find where things are. I think the governments need to get together, because this is getting very serious."

NATO, however, hasn't shown much appetite.

"I don't see a role for NATO in Iraq," NATO Secretary-General Anders Fogh Rasmussen said June 12, one day after NATO ambassadors held an emergency meeting on the situation at Turkey's request. "But of course we follow the situation closely and urge all parties involved to stop the violence."

Others with access to classified intelligence were more reluctant.

"I wouldn't be pushing [for aerial support] at this point," Rep. Adam Schiff, D-Calif., a member of the intelligence and foreign aid appropriations panels, told Al-Monitor.

"There's a lot I'd need to see before I'd be prepared to take that step, including a step in the operation of the Maliki government. But even then it would be hard for me to justify using our military resources."

And House Intelligence Committee Chairman Mike Rogers, R-Mich., said any US air intervention must be part of a broader strategy.

"I would not be opposed to strikes — if it's part of a holistic plan," Rogers told Al-Monitor. "You can't just fire a few missiles and be done."

"What we should do is provide the equipment and the technical assistance that the Iraqis have been asking for," he said. "I don't know enough of the details about the airstrikes to comment about whether we should or we shouldn't. But it's not like we haven't seen this problem coming for over a year."

A House leadership aide suggested part of the problem has been the absence of a clear request from the Iraqi government itself. Many lawmakers appeared to only find out about the Iraqi request from media reports that said the White House had rebuffed Maliki's request.

"You don't make national security decisions based on one sentence in a New York Times story," the aide told Al-Monitor.

Obama pushed back hard against congressional attacks on June 12, saying his national security team has been "working around the clock" to identify what kind of assistance would be most effective.

"I don’t rule out anything because we do have a stake in making sure that these jihadists are not getting a permanent foothold in either Iraq or Syria, for that matter," Obama told reporters following his meeting with Australian Prime Minister Tony Abbott at the White House.

Later in the day, the White House announced that Vice President Joe Biden had spoken to Maliki on the phone and told him that the United States is "prepared to continue to intensify and accelerate security support and cooperation with Iraq … to confront the urgent and growing threat posed by ISIS."

The State Department also announced the release of $12.8 million in humanitarian aid to help international organizations "working to meet the needs of internally displaced persons and conflict victims in Iraq." The International Organization for Migration has estimated that almost 1 million Iraqis have been displaced by the recent violence.