The secretary of state has told lawmakers that passing triggered sanctions could help get a nuclear deal. 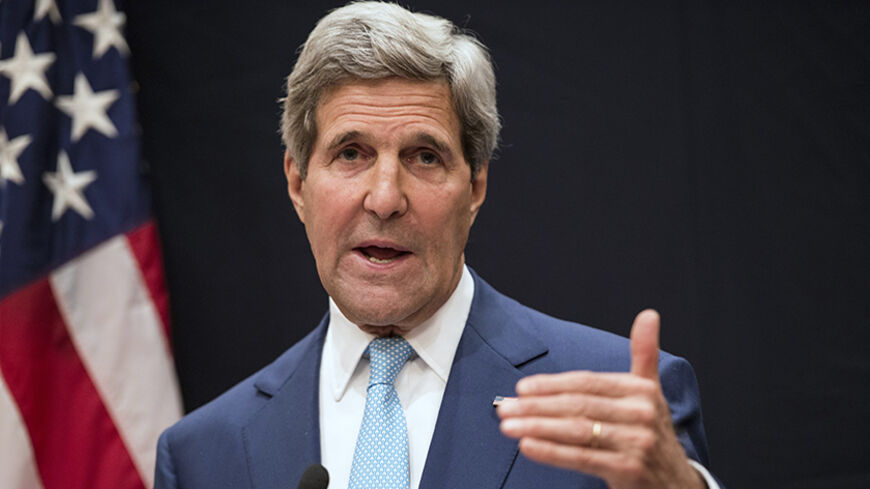 Kerry made the remarks at a State Department meeting with a group of Jewish lawmakers who are regularly briefed on issues pertaining to Israel. He discussed the likely need for an extension of the negotiations of up to four months as well as the Israel-Gaza conflict. He made it clear that he was just floating ideas, several lawmakers said, and had not gotten Obama to sign off on them.

"He said it might be useful as a spur," one lawmaker said. "But he said he hadn't checked with the White House."

"Our position has not changed — we do not support additional nuclear-related sanctions while we negotiate," State Department spokeswoman Marie Harf told Al-Monitor in an emailed statement. "We will continue consulting closely with Congress, [which] has played a key role in building the sanctions regime we have in place right now, about the comprehensive negotiations and the path forward."

In a tweet she said, "sometimes Members hear & project what they want to hear."

Not #breakingnews that sometimes Members hear & project what they want to hear. Will keep consulting, but SecKerry opposed to new sanctions.

Triggered sanctions would only kick in if negotiations fail to produce results within a pre-determined time frame. Kerry did not introduce the idea during the discussion, one source said, but was answering members' questions about it.

"I sensed an openness toward a sanctions bill that would be triggered by future events — or untriggered by positive future events," said Rep. Brad Sherman, D-Calif. "So I'd like to work on that." Sherman was not among the lawmakers who told Al-Monitor that Kerry floated the idea.

The top Democrat on the House Foreign Affairs panel, Rep. Eliot Engel, D-N.Y., said he has talked to Chairman Ed Royce, R-Calif., about introducing triggered sanctions but said he's still making sure it won't derail talks. He also left the meeting under the impression that Kerry wasn't as dead set against such legislation as the administration has been in the past.

"I think he wants to use every tool in the tool box," Engel told Al-Monitor.

Lawmakers said Kerry told them the administration is weighing a variable mix of sanctions relief and further "defanging" of Iran's nuclear program as it works out the details of a possible extension of up to four months.

Supporting new sanctions would represent a sea change in administration policy. When 60 senators signed on to similar legislation in the Senate, the White House stopped just shy of accusing them of warmongering.

"If certain members of Congress want the United States to take military action, they should be up front with the American public and say so," National Security Council spokeswoman Bernadette Meehan said in a January statement. "Otherwise, it’s not clear why any member of Congress would support a bill that possibly closes the door on diplomacy and makes it more likely that the United States will have to choose between military options or allowing Iran’s nuclear program to proceed."

Some lawmakers suggested that the change in tone is an indication that the administration believes that the negotiations are now far enough along that new sanctions wouldn't doom them. Rather, triggered sanctions could help by proving to Iran that Congress is determined to pass new sanctions if talks fail, as Kerry and others have warned all along.

The House passed a new sanctions bill with a 400-20 vote in July, but it remains stalled in the Senate, where Majority Leader Harry Reid, D-Nev., has blocked Iran sanctions bills at the administration's behest.