US officials defended extending the deadline for reaching an Iran nuclear deal by four months and urged Congress to hold off on actions that could derail the talks. 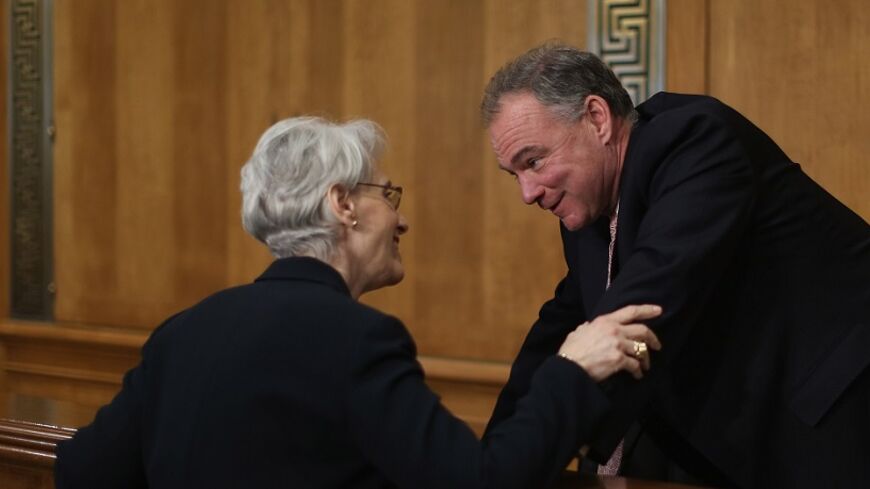 On July 29, the lead US Iran negotiator warned lawmakers that congressional action now that would threaten to impose new sanctions on Iran if a final nuclear deal is not reached in November could jeopardize the sensitive negotiations at a critical moment, and unravel the international coalition pursuing them.

“The administration believes quite strongly that at this moment in [the] negotiations, additional legislative action would potentially derail negotiations,” Undersecretary of State Wendy Sherman told the Senate Foreign Relations Committee July 29.

Sherman, testifying with Undersecretary of Treasury David Cohen, also said that any final nuclear deal reached with Iran over the next four months would seek to cut off all pathways for Iran to make a nuclear weapon, or would detect in time any covert efforts to try to do so and prevent them before they occurred.

“What [we are] trying to do [in a final agreement] is cut off every pathway to nuclear weapons,” Sherman said. “This is not about trust or illusions. This is about verification. This is about monitoring. … This is about inspections.”

Some Senate Republicans, including the panel's ranking Republican Bob Corker, R-Tenn., and John McCain, R-Ariz., pressed for the Obama administration to agree to submit the final deal, if reached, to Congress for approval.

But Sherman said while the administration would continue to consult Congress on the negotiations and that Congress has oversight responsibilities and would be called on to vote on any lifting of sanctions agreed in a final deal, the administration believes the executive branch has the authority to make the deal without congressional approval.

“If you are asking if [we will] come to Congress for action to affirm the comprehensive deal, we believe the executive branch [has the authority],” Sherman said.

Corker, while saying he understood Article II of the constitution granting the president power to execute many national security decisions, said he was seeking more than a promise of a “conversation” with Congress on the terms of a final deal.

Sen. McCain said in his opinion the prospective Iran nuclear deal is for all intents and purposes “a treaty,” He further said, “A treaty requires the advice and consent of the Senate.”

The administration does not concur that the prospective deal, expected to be formally called the Joint Comprehensive Plan of Action, is a treaty that would require Senate ratification.

Sherman reiterated at the hearing what she has said previously at the Iran/P5+1 negotiations in Vienna: the United States would be prepared to accept a limited domestic enrichment program in Iran as part of an otherwise acceptable comprehensive nuclear deal.

But she insisted such a program would have to be “small, limited, [and] attached to a practical need,” and “certainly not industrial capacity."

“Iran has talked about Bushehr, which is fueled by Russia,” Sherman said, referring to what is currently Iran’s only nuclear power reactor. “We believe Russia should continue to provide the fuel for Bushehr. Iran does not need enrichment to fuel Bushehr.”

The issue of the size of Iran's enrichment capacity has become perhaps the central sticking point in the final deal talks between Iran and the six world powers (P5+1). Negotiators had sought to complete the deal by July 20, but this month announced that while they had made some progress, they needed more time, and set a new deadline of Nov. 24.

Sherman and Cohen, in a second briefing before the House Foreign Affairs Committee on the afternoon of July 29, clashed with lawmakers over the need for new sanctions.

“I don’t think we’re going to negotiate a good enough deal, not because Ambassador Sherman is a bad negotiator but because I don’t think you have enough leverage,” said Rep. Brad Sherman, D-Calif. “We should pass sanctions now that would go into effect in January or February.”

“I think we need to be clear,” he said. “And I think if we do tell Iran what their options are, so there is no doubt, we have a better chance of getting a successful resolution of the negotiations.”

“We actually do not support such action, congressman, and the reason is very simple: We believe that if this comprehensive agreement does not work, it should be because Iran cannot make the commitments that it needs to. We don’t want there to be any other basis, any other excuse. We don’t want them to say, ‘We couldn’t get there because Congress pushed our hard-liners to the wall,’ whatever kind of narrative they put on the table.”

The House passed sanctions legislation on a 400-20 vote one year ago. Sanctions that would be triggered if talks fail have garnered 60 co-sponsors in the Senate but Senate Majority Reid, D-Nev., has prevented them from coming to a vote.

Rep. Sherman went on to call on the Obama administration to put the pressure on Tehran by beginning the transfer of 30,000-pound bunker buster bombs and B-52 bombers to Israel, in case negotiations don’t pan out. Rep. Gerry Connolly, D-Va., said that would be a recipe for killing the talks.

The California Democrat also urged the Treasury Department to redouble sanctions enforcement, an effort the administration’s critics say has lagged since the start of the nuclear talks.

Cohen pushed back hard against those critics.

Connolly urged the administration to make that “crystal clear” if they hope to stave off congressional concerns that “we’ve been played for fools.”