Some of the House’s most hawkish Democratic leaders rebuked Saudi Arabia and the United Arab Emirates over their offensive on the key port of Hodeidah. 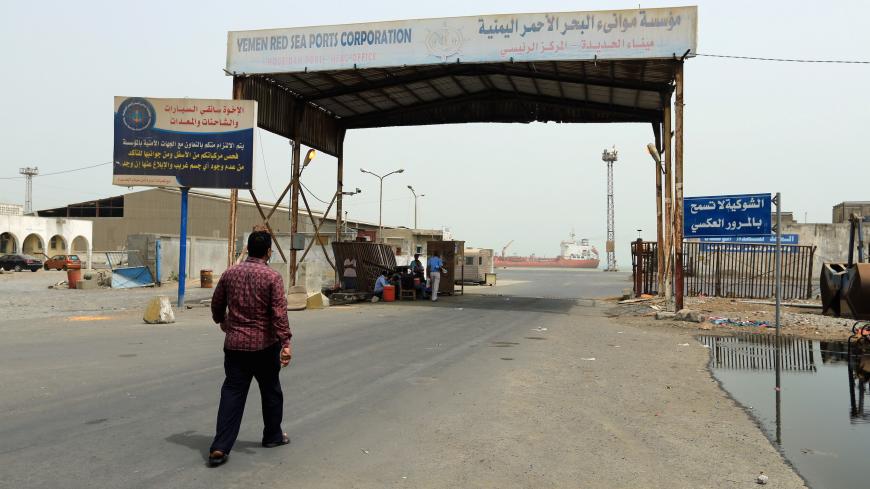 A man walks toward a gate of the Red Sea port of Hodeidah, Yemen, June 24, 2018. - REUTERS/Abduljabbar Zeyad

Key Democratic leaders in Congress are pressing Saudi Arabia and the United Arab Emirates to drop their demands for Yemen’s Houthi rebels to unilaterally surrender the key Red Sea port of Hodeidah.

In a letter to the countries’ ambassadors in Washington, five members of the House Democratic leadership raise concerns about the humanitarian toll in the war-plagued country. The letter marks the latest blow to a Gulf coalition that has continued to hemorrhage support in Congress, which has the power to block arms sales and refueling support to the Saudi-led Arab coalition fighting the Iran-backed Houthis.

“We urge you to be flexible with regard to your requirements to avert escalation at [Hodeidah] — specifically your demands that the Houthis unconditionally leave the city and port, and more recently the entire Red Sea coast, immediately,” the lawmakers wrote to Emirati Ambassador Yousef al-Otaiba and Saudi Ambassador Khalid bin Salman Abdul-Aziz Al Saud.

As part of United Nations envoy Martin Griffiths’ efforts to forestall a bloody offensive, the Houthis have offered to turn over management of the port to the UN. The Saudis and Emiratis, however, are demanding a full withdrawal from the area. Democratic leaders also expressed concern that even if the coalition were to retake Hodeidah, the war would continue as the Houthis double down.

“To the extent the Houthis will continue prosecuting the war and that previous major assaults have failed to provide de-escalation opportunities, we are concerned this assault will deepen, not reduce, coalition engagement in Yemen,” they wrote.

“This is particularly compelling because of who the signers are,” Robert Naiman, the policy director for Just Foreign Policy, an activist group opposing US support for the Saudi coalition, told Al-Monitor. “Hoyer and Engel have been among the most reliably pro-Saudi House Democrats.”

Indeed, the Intercept reported last year that Hoyer was dissuading the Democratic caucus from sponsoring legislation that would have ended US support for the coalition — charges that Hoyer’s office later denied to Al-Monitor.

Additionally, Engel and two other signatories, Lowey and Deutch, have staked out reputations as prominent Iran hawks, even voting against President Barack Obama’s nuclear deal. They have since criticized President Donald Trump’s withdrawal from the deal, however.

Support for the Saudi-led campaign has also eroded among key Democrats in the Senate. Last month, the top Democrat on the Senate Foreign Relations Committee, Bob Menendez, D-N.J., placed a hold on the sale of several million dollars worth of precision-guided munitions to Saudi Arabia and the United Arab Emirates. Notably, Menendez had voted against outright ending US support for the Saudi coalition as recently as March.

The House letter does condemn Iranian support for the Houthis and their repeated ballistic missile barrages into Saudi territory, but argues that a successful attempt to recapture Hodeidah from the rebels would have little impact. While the coalition contends that Iran uses Hodeidah to smuggle arms to the Houthis, many analysts believe that Iranian arms are smuggled using small dhows and overland routes through Oman.

“The Houthis will continue to generate revenue through overland smuggling,” the lawmakers wrote.