Emirati officials are taking to Capitol Hill to say they’re giving the UN-brokered peace in Yemen a shot, but their patience is running out. 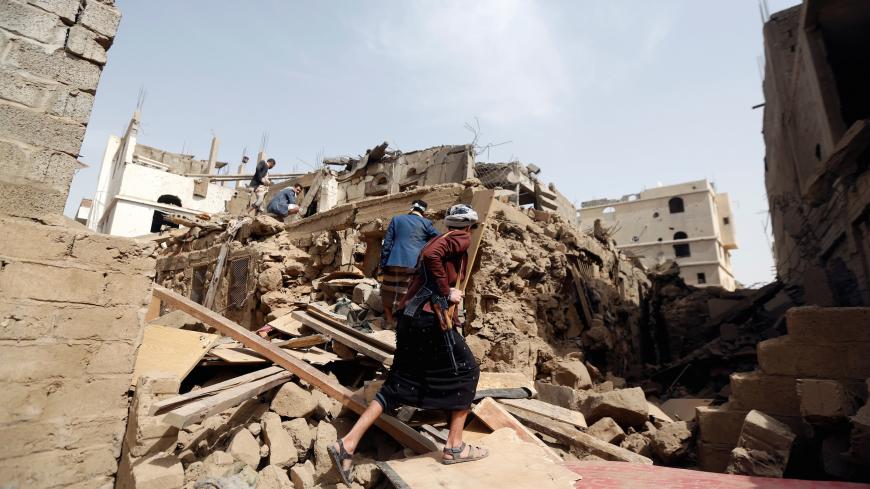 People check damage at the site of an air strike in Amran, Yemen, June 25, 2018. - REUTERS/Khaled Abdullah

Top Emirati officials are talking up their diplomatic efforts in Yemen as the United Nations looks to cut a peace deal and Congress adds new restrictions on US support for the Gulf-led war.

In a letter sent to congressional leaders in June and reviewed by Al-Monitor, UAE Ambassador to the United States Yousef al-Otaiba wrote that the Saudi-led Arab force fighting in Yemen is giving the Iran-backed Houthi rebels “the greatest possible opportunity” for a peaceful withdrawal from the strategic port of Hodeidah.

Otaiba also emphasized that the Saudi-led coalition had stockpiled enough food to feed 6 million Yemenis for a month if the port, which is the thoroughfare for three-quarters of humanitarian aid entering the country, is disabled. The letter was sent to Senate Minority Leader Chuck Schumer, D-N.Y., Senate Foreign Relations Chairman Bob Corker, R-Tenn., and 15 other offices, including a handful of House Democrats who have criticized US refueling of Saudi and Emirati jets in the air war against the Houthis.

On July 23, the armed services panels in the House and Senate released joint defense legislation that draws attention to Emirati actions when reviewing US participation in the war in Yemen. The conference report specifically demands that the Pentagon tell Congress whether US or Arab coalition forces violated federal law or Pentagon policy, while another provision restricts US refueling for the Yemen campaign unless the UAE and Saudi Arabia demonstrate efforts to support UN-backed peace talks, resolve the growing humanitarian crisis and cut down on civilian deaths.

A Senate armed services committee staffer told Al-Monitor that lawmakers extended the certification requirement to the UAE based on an assessment that the Gulf country will play a major role in eventually resolving the Yemen conflict.

Publicly, Otaiba and Reem al-Hashimy, the UAE’s minister for international cooperation, are getting behind UN Yemen envoy Martin Griffiths as he tries to get Saudi, Emirati and Houthi signatures on a 17-point plan to bring peace to the war-torn country.

“They have wanted for two years to see a political process restarted,” Barbara Leaf, a former US ambassador to the UAE, told Al-Monitor. “That’s the way they’d see their goals truly achieved, not on the battlefield.”

That process appeared to move forward July 23, when the Yemeni Embassy in Washington tweeted that exiled President Abed Rabbo Mansour Hadi had accepted Griffiths' deal in principle. But despite giving the peace process a public boost, sources familiar with Otaiba’s talks with House and Senate leaders over the past week say the Emirati powerbroker is concealing an iron fist within his velvet glove.

After the Donald Trump administration gave the Emiratis a “yellow light” to proceed with the Hodeidah operation without US help last month, two sources told Al-Monitor that Otaiba voiced an expectation that the Pentagon would provide support if military operations resume.

The June letter to lawmakers reiterates the UAE’s spurned request for minesweepers that would be needed to resume normal flows of goods to Hodeidah, or to launch an amphibious assault into the city. Otaiba also asked the United States to condemn Houthi use of improvised explosive devices, land and sea mines, and sniper nests in crowded civilian areas. Otaiba and Hashimy also met with Deputy Assistant Secretary of State Tim Lenderking, a top US policymaker on Gulf affairs, a State Department official told Al-Monitor.

One former US official with knowledge of Emirati lobbying on Capitol Hill described a PowerPoint presentation highlighting humanitarian efforts as a “bumper crop of generic answers.” UAE lobbying shop Hagir Elawad & Associates circulated an information pamphlet to Congress in June that breaks down a five-point Emirati plan to provide aid to Hodeidah, according to Justice Department records reviewed by Al-Monitor, including a strategy to strengthen three hospitals, provide shelter to endangered families and supply two mobile desalination units to provide clean water to the beleaguered port.

The former official said the UN has used dhows and small ships to send aid to Djibouti in recent weeks, as shippers have feared entering heavily mined Hodeidah.

Otaiba had harsh words for US policy last week at the Aspen Security Forum, a “who’s who” gathering of policymakers and national security experts. The ambassador downplayed American influence on Emirati decision-making in the war-ravaged country.

“We don’t have a lot of support for what we’re doing in Yemen now, but we’re doing it anyway,” Otaiba said at a panel hosted at the Colorado Rocky Mountain resort, adding that the United States is “no longer [the] global guarantor” it was after the Cold War, forcing Middle Eastern allies to take more independent military action.

But if Griffiths’ talks — the first successful effort to get the Houthis to the bargaining table since 2016 — sputter, it’s not clear to experts that the Emirati plan to take back the port will succeed. Both Otaiba and Hashimy avoided questions about a timeline for the UN-brokered deal at an event at the Arab Gulf States Institute in Washington last week.

Two former US officials told Al-Monitor that the UAE is losing enthusiasm about launching a frontal assault against the city, which they say has been reinforced by Houthi defenders that are chipping away at coalition supply lines. Anti-Houthi forces that remain, sources say, are not equipped for urban warfare.

“Every time you see photographs of these guys, they’re hardened, but they’re running around with Kalashnikovs and sandals,” a former US official said of the Tehama brigades, a local force involved in the Hodeidah fight.

Michael Knights, a Boston-based analyst who embedded with Emirati troops earlier this year, disputed accounts that UAE supply lines into Hodeidah had attenuated in recent weeks. But, he acknowledged, “the longer that goes on, the harder it gets to restart an offensive.”

A UN assessment released in January also indicated that Saudi Arabia and the UAE favored an internationally sanctioned deal to broker an end to the conflict. The UN evaluated that the Houthis saw more advantage in continuing to fight.

Speaking in Aspen last week, Otaiba appeared to signal a central dilemma for the UAE in the conflict: an eagerness to end the fighting, while making sure Houthi fighters don’t have a foothold to fire Iranian-provided ballistic missiles at Muslim holy sites in Saudi Arabia.

“The goal for most of us in the coalition is to get out of Yemen,” Otaiba said. “We cannot allow an Iranian foothold on the border of Mecca and Medina.”