Congress is calling on the Pentagon to try to prevent a UAE-backed attack against Yemen’s largest Houthi-held port, but analysts said it’s unclear whether the United States has much leverage. 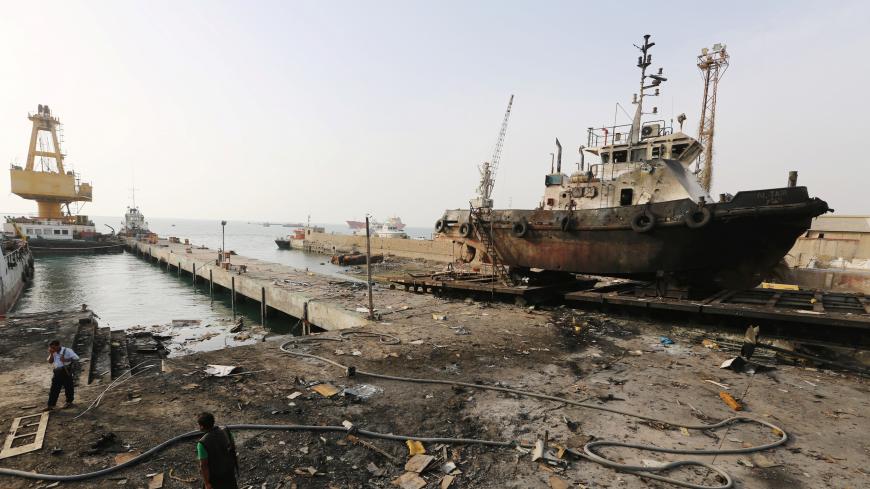 Workers inspect damage at the site of an airstrike on the maintenance hub at the Hodeidah port, Yemen, May 27, 2018. - REUTERS/Abduljabbar Zeyad

As the US-backed coalition in Yemen appears ready to assault the rebel-held port city of Hodeidah, the entry point for most of the country’s aid, Congress is calling on the Pentagon to “use all available means” to stop the operation.

In a letter circulating in the House of Representatives and obtained by Al-Monitor, members of Congress “deeply alarmed” by the military action are asking US Defense Secretary Jim Mattis to dissuade Saudi Arabia and the United Arab Emirates from attacking. UN officials worry the assault could put as many as 250,000 lives at risk.

The Pentagon has already been scrutinized by lawmakers for refueling Saudi and UAE jets in the yearslong conflict and deploying US special forces troops to dismantle Iran-backed missile launchers near Yemen’s northern border without seeking congressional authorization. Al-Monitor reported in November that US refueling support to the coalition more than doubled over the last year.

“We urge you to use all available means to avert a catastrophic military assault on Yemen’s major port city of Hodeida by the Saudi-led coalition, and to present Congress with immediate clarification regarding the full scope of US military involvement in that conflict,” reads the letter spearheaded by Rep. Mark Pocan, D-Wis., which has been signed by seven members of Congress. “We remind you that three years into the conflict, active US participation in Saudi-led hostilities against Yemen’s Houthis has never been authorized by Congress, in violation of the Constitution.”

Yet fierce fighting on the ground may be moving too fast for the United States to stop it. Over the weekend, as the UN’s top Yemen mediator Martin Griffiths tried to talk the Houthis into peacefully turning over the port, Saudi-backed troops clashed with the rebels just miles from the city, with most UN and nongovernmental organization workers quickly hustled out to avoid getting caught in the crossfire.

By late today, key lawmakers had begun losing faith in US efforts to convince Saudi and UAE military officials to stop the assault, after The Wall Street Journal reported that the UN’s shuttle diplomacy failed to move UAE officials and that the Donald Trump administration had given the operation “a blinking yellow light.”

“More evidence the Yemen War is spiraling,” Sen. Chris Murphy, D-Conn., said in a tweet. “The US has begged Saudi/UAE coalition not to attack the humanitarian aid port of Hudaydah. New reports suggest they have refused our plea, are readying an assault. Result could be catastrophic.”

Despite the uptick in US refueling, military experts say the UAE is less dependent on the Pentagon for operations in Hodeidah. Once envisioned as an Emirati-led amphibious assault needing advanced US boats to navigate Red Sea minefields laid by Iran, the 45,000-strong force of Yemeni troops has instead moved along the coast in a two-month offensive to reach Hodeidah with refueling support from new helicopter bases.

“It’s a waste of time to point blank stop this operation without offering an alternative,” said Michael Knights, a fellow at the Washington Institute. “If somebody told the US in 2003, don’t go to Baghdad, what would we have said?”

The letter comes as Congress has been increasingly frustrated in recent months by perceptions that the Trump administration is overriding legislative authority to expand US participation in the Yemen war. In May, Reuters reported that Congress is reviewing the sale of more than 120,000 precision-guided munitions that will be used in the conflict, laying the groundwork for a potential fight on the Senate floor.

‘We are concerned that in the midst of a Senate effort to exercise its constitutional authority to end unauthorized hostilities — including U.S. targeting and refueling assistance for Saudi-led airstrikes against Yemen’s Houthis — the Pentagon may have concealed key information from members of Congress regarding the full extent of on-the-ground U.S. military participation in the Saudi coalition-led war,” the letter adds.