Congress raises alarm over US confrontation with Yemen's Houthis

House members want the legislative branch to sign off before any escalation against the Iran-backed group. 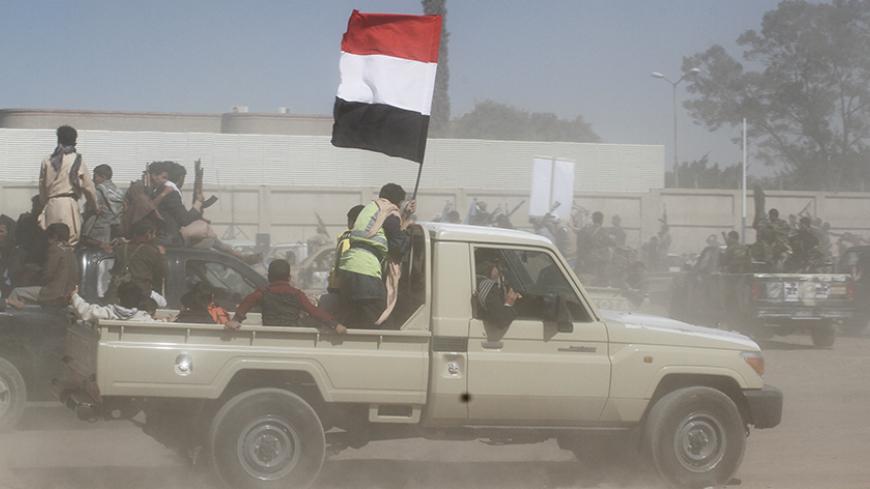 A bipartisan group of US lawmakers is demanding that President Donald Trump seek the approval of Congress before escalating US involvement in Yemen's civil war.

Four House members are collecting signatures on a letter to the president amid growing signs that the White House and the Pentagon want to more directly take on the Iran-backed Houthi rebels. The United States has been selling bombs and weapons to the Saudi-led coalition since its March 2015 intervention, but the Trump administration is reportedly considering helping Saudi and Emirati forces capture the Red Sea port of Hodeida.

"Engaging our military against Yemen’s Houthis when no direct threat to the United States exists and without prior congressional authorization would violate the separation of powers clearly delineated in the constitution," reads a draft letter to Trump obtained by Al-Monitor. "For this reason, we write to request that the Office of Legal Counsel (OLC) provide, without delay, any legal justification that it would cite if the administration intends to engage in direct hostilities against Yemen’s Houthis without seeking congressional authorization."

Attorney General Jeff Sessions is copied on the letter.

The letter is being circulated by Reps. Mark Pocan, D-Wis.; Justin Amash, R-Mich.; Ted Lieu, D-Calif.; and Walter Jones, R-N.C. Peace groups including the Friends Committee on National Legislation are lobbying for it.

The effort comes as the Trump administration has increasingly framed the Houthis as a threat to US interests.

When the administration announced new sanctions on Iran last month, then-National Security Adviser Michael Flynn declared that "Houthi forces that Iran has trained and armed have struck Emirati and Saudi vessels and threatened the United States and allied vessels transiting the Red Sea." And just this week, Central Command chief Joseph Votel told Congress that there are "vital interests at stake" for the United States in the Gulf alliance's fight against the Houthis.

Testifying before the House Armed Services Committee on March 29, Votel accused the Houthis of threatening freedom of navigation between the Red Sea and the Indian Ocean through the deployment of mines, missiles and other defenses along the Bab el-Mandeb Strait. "I am extraordinarily concerned about another contested maritime chokepoint in the region," Votel said.

Such statements have alarmed lawmakers who fear the administration is laying the groundwork for greater US involvement in another sectarian conflict between Saudi and Iran-backed proxies. Lieu told Al-Monitor that he expects the recent decision to send 400 more troops to Syria and the uptick in civilian deaths from US airstrikes will also create momentum for the letter.

"This is just a continuing pattern where the administration goes off, spends money and uses military force in different parts of the world without explaining to the American people what it is we are doing," Lieu told Al-Monitor. "The normal way it would operate is if the president wants to be involved in a military conflict halfway around the world, [administration officials] would engage with Congress and explain what they're doing. The administration has done very little to none of that."

While peace advocates are focused on the House for now, a number of senators have also weighed in on the issue.

"Flynn brought the Houthis into the statement in order to warn the Iranians that if the Houthis continued to attack Saudi Arabia, we would consider it a threat to us commensurate to the firing of the ballistic missiles," Murphy wrote. "This is an absurd equivalence argument, and it could lead us into a war that no American is looking for."

Last year, Murphy banded together with Sens. Rand Paul, R-Ky., Mike Lee, R-Utah, and Al Franken, D-Minn., in an effort to withhold arms sales to Saudi Arabia amid accusations that the Gulf coalition was carelessly or deliberately bombing civilian targets in Yemen. Together they convinced more than a quarter of the Senate.

Even lawmakers who support the Gulf coalition are wary of unchecked US escalation.

Senate Foreign Relations Chairman Bob Corker, R-Tenn., made it clear he doesn't believe the Authorization for the Use of Military Force that Congress passed in 2001 to counter al-Qaeda would apply to the Houthis.

"Certainly engaging in a war against a group outside of ISIS [the Islamic State] is a step beyond the current authorization," Corker told Al-Monitor.

Other powerful actors, however, argue that Trump has all the authorization he needs to take on the Houthis, either under the 2001 authorization or under his constitutional powers as commander in chief.

"I think it has significantly to do with al-Qaeda, and I believe we cannot allow Iran to dominate that country," Senate Armed Services Chairman John McCain, R-Ariz., told Al-Monitor. "I think it's a direct threat to the United States' national security and would help the rise of al-Qaeda and other extremist elements. I don't have a problem with that."