Exploiting to the fullest the short opportunity he got to serve as defense minister, Naftali Bennett has no qualms about pushing for more Jewish settlements in the volatile West Bank city of Hebron. 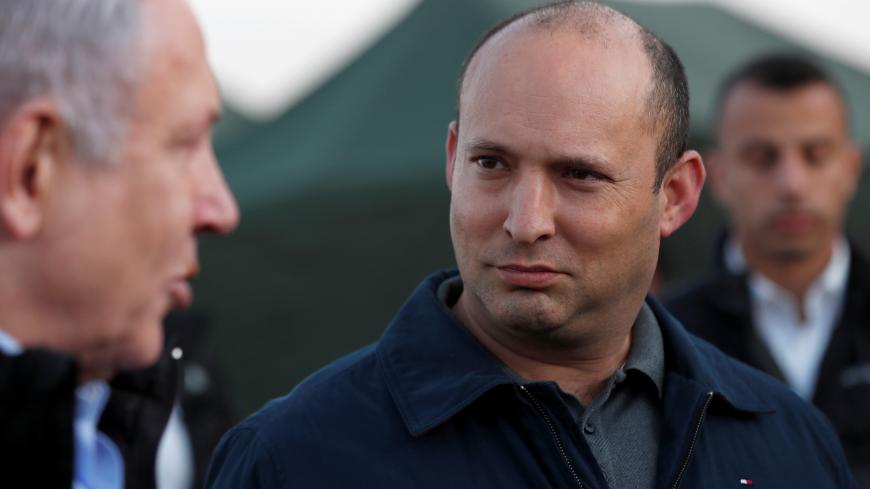 Israeli Defense Minister Naftali Bennett looks at Prime Minister Benjamin Netanyahu during a visit to an Israeli army base in the Israeli-occupied Golan Heights, Nov. 24, 2019. - Atef Safadi/Pool via REUTERS

Less than a month on the job, and Defense Minister Naftali Bennett is not wasting a minute of his time. On Dec. 1, he instructed the Coordinator of Government Activities in the Territories to inform Palestinian municipal authorities in Hebron that planning had begun for construction of a new Jewish neighborhood in the compound of the town’s wholesale market, earning accolades from his target audience, the settlers. In doing so, Bennett is seeking to create territorial contiguity from the Tomb of the Patriarchs to the Jewish neighborhood of Avraham Avinu (Our Father Abraham) and to double Hebron’s Jewish population.

According to data compiled by the human rights organization B’Tselem, some 700 Jews currently reside in the area of Hebron designated as H2, which includes the Old City, as well as 250 students in the Shavei Hevron yeshiva. About 34,000 Palestinians also live in H2 and another 166,000 in other parts of the town, designated H1.

H1 and H2 were so designated by the 1997 Hebron Protocol, signed by Prime Minister Benjamin Netanyahu and then-head of the Palestinian Authority, PLO leader Yasser Arafat, in order to divide security control of the volatile and tense city, especially in the wake of the 1994 massacre of Muslim worshippers by a Jewish settler. The division was intended to prevent the tensions between the Jews and Palestinians from spilling over into other parts of the West Bank and undermining the Oslo peace accords. The idea was also to create a buffer between Palestinians and Jews, who regard habitation in the city, including the takeover of homes in the heart of the crowded Palestinian town, as a pioneering, national religious mission.

Under the agreement, 80% of the town’s area (H1) was handed over to Palestinian control. The rest (H2), where 34,000 Palestinians live along with the Jewish settlers, and which includes the Old City and the Tomb of the Patriarchs sacred to both Muslims and Jews, is under Israeli military control.

While the agreement was designed to separate Palestinians and Jews, clashes and friction between the two sides have occurred virtually daily ever since it was signed. The Jewish settlement is populated by radical right-wing activists and an extremist core of settlers, including disciples of arch-racist Rabbi Meir Kahane, such as Baruch Marzel and Noam Federman. Also, radical activists, such as Chairman of the Otzma Yehudit party Michael Ben Ari, whose history of anti-Arab incitement disqualified him from running for the Knesset this year, and Bentzi Gopstein, founder of the radical Lehava organization, are frequent visitors.

To protect the settlers and prevent clashes between Jews and Palestinians to the extent possible, the Israeli military has set up some 20 roadblocks within the town over the years. Palestinians wishing to move around Hebron are forced to undergo intrusive security checks at every checkpoint. The restrictions have pushed thousands of residents from the H2 area to H1, leaving behind deserted, abandoned streets — all for the sake of some 1,000 settlers and religious students who view the Jewish settlement in Hebron as a return to the holy ancestral city of their forefathers.

The wholesale market where Bennett has approved construction has long been a bone of contention. The Jewish community that lived in Hebron bought the area prior to the 1929 riots in which 133 Jews were murdered, after which Jews left the city. It subsequently came under Jordanian control. Following the 1967 Six-Day War, Israeli authorities gave the municipality permission to build a market in the compound. The market was in operation until the 1990s, but since the beginning of the Jewish “return movement” to the city, the settlers have been seeking to restore the ownership of the market area to the Jews, which bought it legally decades ago.

The decision of a new Jewish neighborhood was one of Bennett’s first acts as defense minister despite the fact that he serves in a caretaker government that has not won the confidence of the Knesset (his appointment was not approved by the Knesset, either), and is not authorized to make such weighty decisions. Bennett nonetheless gleefully announced that he was restoring Hebron to its historic glory days and building homes there for the Jews.

According to Bennett, the market buildings will be razed and new ones will be built to replace them. The upper floors will be reserved for apartments for Jewish tenants, while the shops on the ground floor will remain under Palestinian ownership to ensure, as per Bennett, that their rights are protected.

All of Israel’s defense ministers over the years, including the late Defense Minister and Prime Minister Ariel Sharon considered the father of the settlements, as well as Moshe Arens, Moshe Ya’alon, Avigdor Liberman and even former Defense Minister Netanyahu, all distinctly of the right-wing persuasion, avoided moving a single stone in the market area in order to preserve the fragile status quo in the tinderbox town. Then Bennett came and decided that he would use the biblical city to rehabilitate his shattered political standing.

Bennett, as some may recall, quit his HaBayit HaYehudi party prior to the April 2019 elections with his political partner Ayelet Shaked to found the New Right party. His gamble culminated in a humiliating ballot box defeat, leaving the small party out of the Knesset. Ahead of the September elections, beaten and abused, he joined the Yamina (Rightward) alliance of right-wing parties and was placed in the fourth and unflattering place on its list of Knesset candidates. Following the elections, which did not yield Yamina the bonanza it targeted, the New Right broke away from the alliance, leaving Bennett in a tiny three-member Knesset faction.

Netanyahu nonetheless handed him the prestigious Defense Ministry post because he feared Bennett would join forces with Blue and White leader Benny Gantz and enable him to form the country’s next government. Thus, one of the most senior posts in government was handed as a pay-off to a man who has not won his voters’ trust. From his office in the Defense Ministry headquarters in Tel Aviv, Bennett is now attempting to woo back the electorate that abandoned him. He knows that without the settler vote, he does not stand a chance of political rehabilitation and his days in the Defense Ministry are numbered.

Bennett took office in the midst of Israel’s military operation codenamed “Black Belt,” which began with its Nov. 12 killing of top Islamic Jihad military commander in Gaza, Bahaa Abu el-Atta, followed by retaliatory barrages of hundreds of rockets fired by the organization into Israel. Given the timing, Bennett asked to scrap the ceremony usually held to welcome new defense ministers. As a freshman defense minister, Bennett has since been issuing press statements on various issues of great sensitivity — for example, an ambitious plan to expel Iranian forces from Syria — much to the dismay and anger of the defense agencies.

Bennett’s decision on new Jewish housing in Hebron is yet another sensitive initiative designed to please the settlers, portray him as Israel’s best defense minister ever and reward him accordingly. Maybe this way he could garner sufficient votes to get back into the Knesset in the next elections — and the rest be damned.