The Blue and White party needs Prime Minister Benjamin Netanyahu as a rival, or else it would loose its energy. 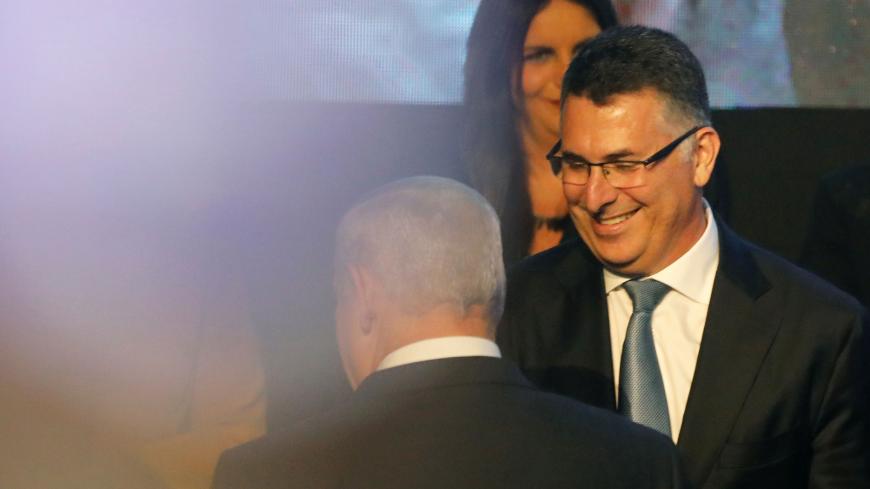 Despite his precisely targeted campaign and some unexpected support, the chances of Gideon Saar engineering a surprise defeat of Prime Minister Benjamin Netanyahu in the Dec. 26 primaries for the Likud party leadership are still considered modest. Netanyahu is campaigning intensely and enjoys strong support among party members, even if some of them realize this is the end of an era.

But as strange as it sounds, not only Netanyahu’s close associates and sworn fans are praying for his victory; so are his political rivals, especially leaders of the opposition Blue and White party. A resounding Netanyahu defeat with Saar assuming the party leadership and candidacy for prime minister would deal Blue and White a strategic blow.

The Blue and White party, led by three former army chiefs — Benny Gantz, Moshe Ya’alon and Gabi Ashkenazi — together with Yair Lapid does not have an appropriate alternative for the effective machine that has been churning out votes for them this past year. More so. Netanyahu’s disappearance from the public arena would also defuse the main and almost sole source of energy fueling the entire Israeli political system. Netanyahu is like the sun around which the entire planetary system orbits. If he is unseated, all its components will have to recalibrate their course.

Blue and White was not established to revive the peace process with the Palestinians, to cut inflation, to reduce unemployment or to destroy Iran’s nuclear program. Blue and White was formed with only one goal in mind: To bring to an end the Netanyahu regime, which many in Israel perceive as undermining the pillars of Israeli society and ripping apart the delicate social fabric keeping together 9 million members of many tribes and diverse groups. Netanyahu was the only glue linking Gantz and Lapid, Ashkenazi and Ya’alon and all of them to each other. The past two years, during which Netanyahu has intensified his terrible campaign against the country’s law enforcement and legal authorities, set off strident alarm bells and stirred people like Ashkenazi, who had already decided to forego a political career, to action. Blue and White is comprised of right-wing Likud supporters and left-wing Meretz voters, secular and religious Israelis, liberals and conservatives, a diverse array of views and directions that no one could have bound together in one large, effective party. No one, that is, except Benjamin Netanyahu.

The current Israeli political arena only has two vectors: anti-Netanyahu and pro-Netanyahu. All other issues and differences that usually typify the political arena have dissipated or been dwarfed. Almost everyone understands that if US President Donald Trump’s “deal of the century” for Israeli-Palestinian peace is ever revealed, no Israeli prime minister would be able to reject it. Everyone understands that the anti-Iran campaign must continue with full force. Everyone understands that Israel must keep preparing for a broad clash on its northern front that will exact a heavy toll on its population and economy. There are deep and unresolved divisions on issues of religion and state, where Blue and White has a built-in advantage over Netanyahu and the Likud that are bound by their historic alliance with the ultra-Orthodox parties.

Either way, none of these issues has played a role in the two 2019 election campaigns. The one and only issue is Netanyahu, yes or no. Can he continue in his job under indictment? Should he step down? Is his attempt to crush the state’s law and enforcement legal systems worthy or unacceptable? Is he the best prime minister Israel has ever had and should be considered for anointment as king, or the most corrupt, rotten leader that Israel has ever had in its 71 years, motivated only by his personal ambition and hedonism?

The minute Netanyahu disappears, this will all disappear with him. The last time he was defeated in elections, in 1999, writer Amos Oz described him as a large electric generator clattering in the yard under our window that was suddenly silenced. Twenty years on, the generator is even larger and it is clattering away in the living room of every Israeli family. Netanyahu’s descent from the political stage will leave behind a yawning silence, a political vacuum and quite a few confused politicians. The Blue and White machinery will find itself suddenly unplugged, cut off from its power source. “I have no idea what will happen if he loses to Saar,” a top Blue and White figure told Al-Monitor on condition of anonymity. “It will be easier for Gideon Saar to mobilize moderate right-wing voters and centrist voters of the kind we court, whereas Netanyahu’s sworn followers could wander over to the more radical right-wing parties.”

At least three of Blue and White’s Knesset members are considered closer to Saar in their views than to the lawmakers on its liberal flank, such as Yael German (formerly of Meretz) and Ofer Shelah. They are Zvi Hauser, a veteran ally of Saar’s who served as Netanyahu’s Cabinet secretary; Netanyahu’s former communications adviser Yoaz Hendel; and even Lt. Gen. (Res.) Ya’alon, who was a member of Netanyahu’s government alongside Saar. Once Netanyahu’s heavy shadow is removed, will they be able to confront Saar directly in the March 2020 elections even though there is no significant ideological difference between them? “We will cross that bridge when we come to it,” a senior Blue and White source told Al-Monitor on condition of anonymity. “Right now, prospects of a Saar victory over Netanyahu are very poor.”

Netanyahu’s prospective departure from the arena would have the opposite effect on the small satellite parties to the left of Blue and White. By turning off Blue and White’s vote-generating machine, it would allow the Labor-Gesher party and Meretz (in its current Democratic Camp party platform) to chart a new course and pick up the voters who flocked to Blue and White to stoke its anti-Netanyahu goal. For now, with the demon named Netanyahu continuing to threaten the state’s democratic institutions, there is real concern that voters’ switch over to Blue and White will keep Labor-Gesher and Meretz (the Democratic Camp) out of the next Knesset elected on March 2, 2020. Netanyahu’s disappearance will revitalize ideological left-wing voters and free them to return to their mother ships. “We are praying for this to happen,” a Labor party source told Al-Monitor on condition of anonymity. “But we know the chances of that are low.”

Some of the question marks will be answered Dec. 26, after the Likud primaries. Netanyahu, who is expected to win, is debating whether to boost his harsh attacks on law enforcement and legal authorities or to execute a dramatic 180-degree turn and opt for a dignified campaign showcasing his achievements and international standing vis-a-vis his rivals. For now, he appears leaning toward the second option.