Will Supreme Court force Netanyahu to 'go do other things'?

Prime Minister Benjamin Netanyahu claims that the criminal indictments against him shouldn't disqualify him from being eligible to form a government, but he was singing a different tune when Prime Minister Ehud Olmert merely faced the prospect of indictment. 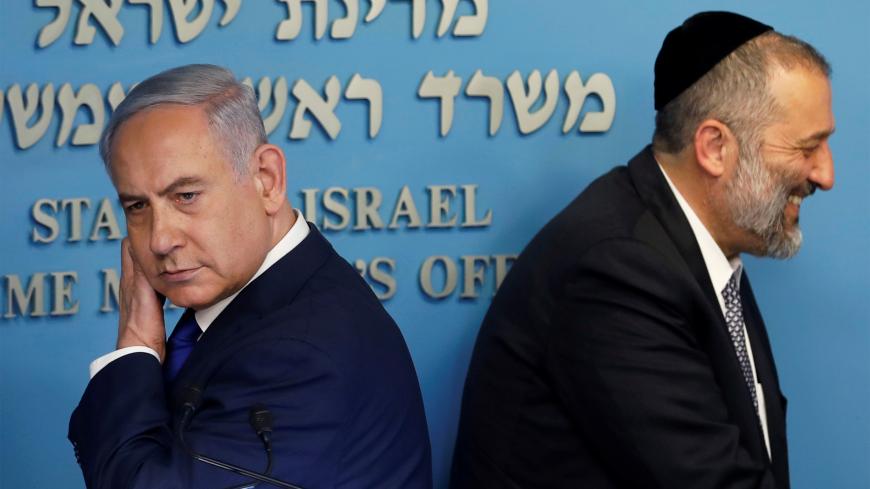 Israel’s Supreme Court has scheduled a Dec. 31 hearing on whether a politician under criminal indictment can be tasked with forming the country’s government. Responding to the court's decision to hear a petition on the matter, Prime Minister Benjamin Netanyahu, indicted on charges of bribery, fraud and breach of trust, said, “In a democracy, it is the people who decide who will lead them, not anyone else. Otherwise, it just isn’t democracy.”

If what Netanyahu said is indeed the case, let us examine the opinion of one of the people who is not just anyone, but a prominent leader of his generation. Does the person who has led Israel for the past decade, as well as for three years in the 1990s, believe that a prime minister under criminal indictment is worthy of leading the people? It is worthwhile dredging up yet again the strong views that Netanyahu, at the time a Knesset member, expressed on the subject as leader of the opposition when Prime Minister Ehud Olmert was suspected of corruption, though unlike Netanyahu had not been indicted pending a hearing by the attorney general.

“A prime minister steeped up to his neck in investigations doesn’t have a moral or public mandate to make such fateful decisions regarding the State of Israel,” Netanyahu opined on Dec. 13, 2008. “There is a real, not unfounded fear that he will make decisions based on his own interests of political survivability rather than the normal interest.”

Like Netanyahu, Olmert indeed was not keen to step down, but his political partners at the time, chief among them former Prime Minister Ehud Barak, showed him the door. Today, Netanyahu’s partners from the ultra-Orthodox parties are providing him with a tightly woven safety net. They are not doing so out of love for Netanyahu, but rather making decisions “based on his personal interest for political survival, not on the national interest,” as opposition leader Netanyahu put it in Olmert’s case.

Both Shas Chair Aryeh Deri and United Torah Judaism (UTJ) Chair Yaakov Litzman are mired in criminal swamps. They, too, have a stake in undermining the state’s law enforcement, prosecution and judicial arms. Deri and Litzman’s followers voted in the two 2019 Knesset elections for the parties they head, just as Netanyahu’s people voted for his party. Judging by the latest polls, the recommendation by outgoing State Prosecutor Shai Nitzan to the attorney general to indict Deri on charges of fraud and breach of trust, money laundering, tax-related offenses and obstruction of justice will not affect Shas’ prospects in the March 2 elections for Israel’s 23rd Knesset.

The same applies to the electoral prospects of UTJ despite the police recommendation to indict Litzman on charges of bribery, suborning perjury, fraud and breach of trust. The ultra-Orthodox leader is suspected, inter alia, of exerting pressure on two psychiatrists in a bid to prevent the extradition to Australia of former Melbourne School principal Malka Leifer, wanted there on charges of sexually molesting minors. Public opinion polls indicate that the damage caused by the affair to Israeli-Australian relations and to the Jewish community Down Under will not be reflected in the number of Knesset seats UTJ garners in the March elections.

In the September 2019 elections, 1,712,591 Israeli citizens — the vast majority of Jewish Israelis, who accounted for 38.6% of eligible votes cast — voted for parties whose leaders were either under indictment or under suspicion of criminal wrongdoing. In addition, 310,154 voters (6.99%) backed Yisrael Beitenu, led by Avigdor Liberman, who has yet to provide a reasonable explanation for the millions of dollars that landed in his daughter’s lap at the age of 21 and for the millions that his driver made. The widely known fact that key witnesses vanished or were struck dumb did not then and will not now stand in Liberman’s way as a key figure on Israel’s electoral map.

The essence of democracy, as interpreted by Netanyahu and his people, including his two most recent justice ministers, is that the majority decides who rules it, and therefore, indictment on a bribery charge should not stand between an accused politician and the premiership. What if a popular politician is accused of sexual harassment or rape? This is not a far-fetched scenario. Israel had just such a president, Moshe Katzav, who was convicted of rape in 2011. There is no greater threat to democracy in a state with an Arab minority than disqualifying the judicial branch from ruling on moral values and placing such authority in the hands of the Jewish majority.

A wide-ranging survey published in October 2019 indicates that 63% of young Jewish Israelis believe protecting minority rights is not of paramount value. This figure is higher than the average recorded in Arab states, where 44% underestimate the importance of protecting minorities. The German Friedrich Ebert Foundation and Israel’s Macro Center for Political Economics commissioned the survey, which is based on 2016 data. They found that 63.1% of young Jewish respondents support equal political rights for all Israelis, a dramatic drop from the 81.6% who voiced support in 2010.

One more comment regarding Netanyahu and respecting the will of the people: During Netanyahu's first term, he pledged with great fanfare that he would sponsor legislation limiting prime ministers to two terms in office. “If you don’t get it done in your first term, you might do what you need in the second term, but you don’t need more than that,” Netanyahu said in a 1996 television interview. “Get things done, and then go home — in a political sense,” Netanyahu said, adding that after serving two terms he would “go do other things.”

According to Netanyahu's own assertion, what the prime minister has not done in two terms, not to mention five, he will not do in his sixth term, either. Even if the people decide otherwise, Netanyahu must be allowed to go “do other things,” for example, defend himself in a court of law, unless he also thinks the people are the ones who should determine the innocence or culpability of him and his partners and should rephrase the equal rights provision on fair trials enshrined in the Declaration of Independence.