Iran condemns US attack in Iraq

The Islamic Revolutionary Guard Corps has condemned the US attack on PMU forces in Iraq and said Iraq has a right to respond. 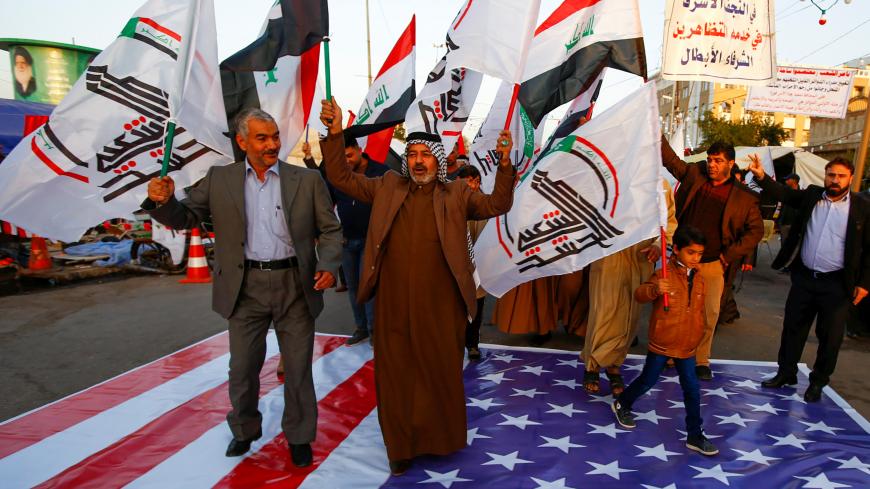 Iraqi people walk on a US flag in a protest after an airstrike at the headquarters of Kataib Hezbollah militia group in Qaim, in the holy city of Najaf, Iraq, Dec. 30, 2019. - REUTERS/Alaa al-Marjani

The Islamic Revolutionary Guard Corps (IRGC) has condemned the US attack on Iraqi forces. The United States carried out airstrikes against Kataib Hezbollah, an Iranian-backed group that is part of the Iraqi Popular Mobilization Units (PMU) that fought against the Islamic State (IS). According to Kataib Hezbollah, 25 of its members were killed and dozens were wounded. The US attack was in retaliation for a Kataib Hezbollah attack that killed a US contractor.

According to the IRGC statement, “The air attack by the terrorist American invaders against Hashid Shaabi (PMU) bases, which resulted in the martyrdom and injury of resistance fighters and the Iraqi people’s forces, is a violation of the national sovereignty of this country, and it showed once again that the United States is the prime agent of instability, chaos, tensions and fires in this region.”

The IRGC statement did not refer specifically to Kataib Hezbollah, which Iran supports and backs and whose leader, Abu Mahdi al-Muhandis, has strong ties to Iran. Rather, the statement referred only to a US attack on Hashid Shaabi forces, which were originally a volunteer force that answered the call to arms after Iraq’s leading cleric, Grand Ayatollah Ali Sistani, called on Iraqis to fight back against the rise of IS. The PMU, along with US airpower, were instrumental in rolling back the encroachment of IS across northern Iraq.

The IRGC statement said, “It is natural that the people of Iraq and the Hashid Shaabi under international laws and charters have a right to revenge and answer the latest great American crime.”

The attack on the US contractor and the subsequent US attack on Kataib Hezbollah is part of an ongoing proxy war between Iran and the United States in the region, which began when the United States invaded Iraq in 2003 and Iran began supporting Shiite groups in Iraq. The IRGC statement suggests Iran will not directly attack US forces and leaves any possible retaliation up to Iraqi forces. Iran’s goal since the US invasion is to get the United States and its bases out of neighboring Iraq. The IRGC statement referred to American forces as “occupiers,” despite the fact that the current US presence in Iraq is up to Iraqi government officials.

Iran’s Foreign Ministry Spokesman Abbas Mousavi also condemned the US attack on Iraqi forces. “With this attack, the United States showed its complete support for terrorism and its lack of attention for the independence and sovereignty and must accept the consequences of this illegal action,” Mousavi said. He added, “The United States must end its occupying presence.”

Iranian media has also generally condemned the US attack. Top stories across Iranian websites include Sistani’s condemnation of the attack, which also included a statement asking the Iraqi government to prevent the use of Iraq by others to “settle regional and international scores” — a clear reference to Iran’s and the United States' competition for influence inside Iraq.