Defense Secretary Mark Esper told an audience at a New York think tank he was worried that Turkey is “spinning out” of the NATO orbit. 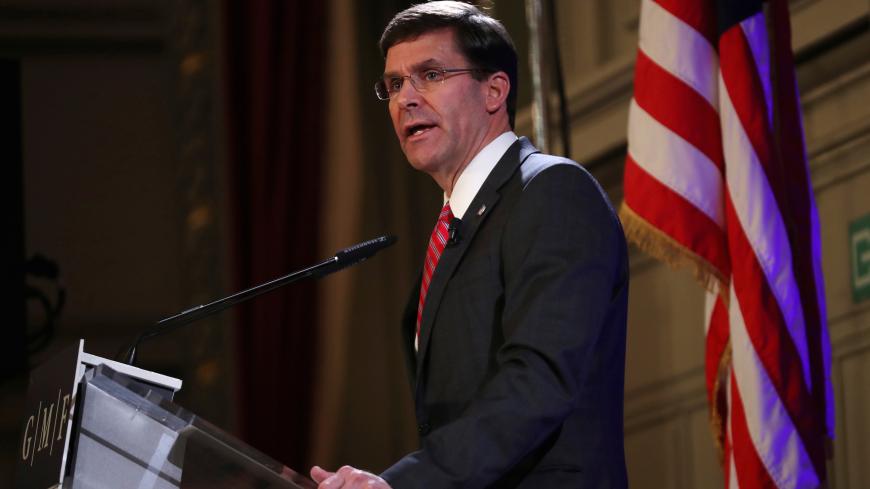 US Defense Secretary Mark Esper speaks during an event at the Concert Noble in Brussels, Belgium, Oct. 24, 2019. - Francisco Seco/Pool via REUTERS

Defense Secretary Mark Esper told an audience at a New York think tank he was worried that Turkey is “spinning out” of the NATO orbit, perhaps the most strident language the Pentagon chief has used to describe the ongoing rift between the allies since he took the job in July.

Full quote: "I'm very concerned about Turkey's direction. I think they are spinning out of the NATO orbit and we need to work hard to get them back in."

Esper added that Turkey appears to be moving counter to key NATO foreign policy objectives: “We had them holding up planning in NATO and this unwarranted incursion in Syria is just not helpful.”

Why it matters: This is the third time in a week the Pentagon chief has raised concerns about Turkey creating distance with NATO alliance, indicating that Ankara’s courtship of Russian military hardware and two-month incursion into Syria are continuing to fray military ties with the United States.

Pressure from Congress: Earlier this week, Congress agreed to a defense authorization bill that passed in the House that would recognize Turkey’s $2.5 billion purchase of the S-400 as a “significant transaction,” the threshold for imposing sanctions on Russian arms buyers that the Trump administration has not instituted. Turkey took delivery of the Russian air defense system on July 13, more than 150 days ago.

The Senate also recognized the Armenian genocide, a measure that overwhelmingly passed the House last month, after the White House finally decided not to block the move after instructing Republicans to stop it three times.