The Senate unanimously recognized the Armenian genocide today, the latest in a string of major blows against Turkey within a week. 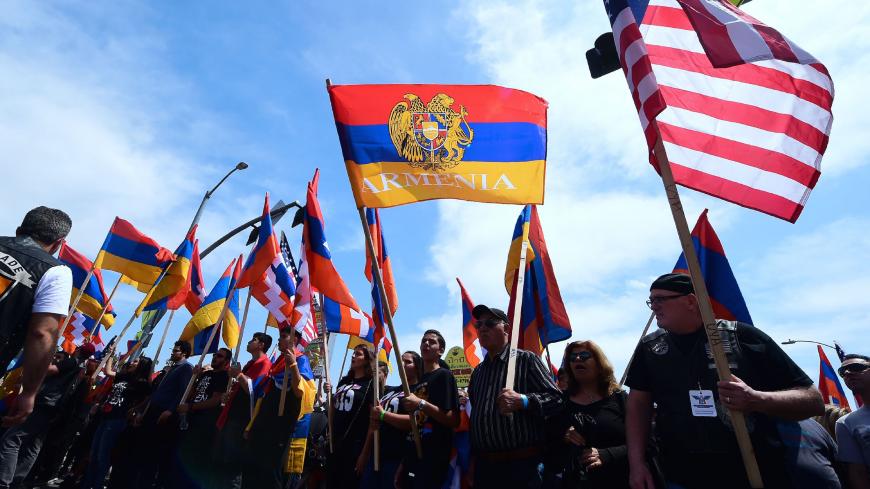 Armenian-Americans march in protest through the Little Armenia neighborhood of Hollywood, California, on April 24, 2018, demanding recognition by Turkey on the 103rd anniversary of the 1915 Armenian genocide. - FREDERIC J. BROWN/AFP via Getty Images

The Senate today recognized the Ottoman Empire’s massacre of more than 1 million mostly Christian Armenians as a genocide — the culmination of a week of punitive congressional measures against Turkey.

Sens. Bob Menendez, D-N.J., and Ted Cruz, R-Texas, got their Armenian genocide resolution unanimously passed today despite opposition from the White House. Menendez’s resolution is the fourth significant blow Ankara has faced on Capitol Hill this week alone, coming shortly after Congress advanced a Turkey sanctions bill and legislation that would lift the Cyprus arms embargo and more permanently ban the transfer of US F-35 fighter jets to the NATO ally.

Fearful that the resolution could obstruct President Donald Trump’s efforts to salvage the troubled US-Turkey alliance, the White House scrambled to find a new Republican ally willing to block the Armenian resolution today — but could not find anyone willing to take the political hit. Al-Monitor reported last week that the White House had managed to buy some time by recruiting a different Republican senator to block the resolution during each of Menendez’s three previous efforts to pass it on the floor.

“The Senate today joined the House in rejecting Ankara’s gag-rule against honest American remembrance of the Armenian genocide — overriding the largest, longest foreign veto over the US Congress in American history,” said Aram Hamparian, the executive director of the Armenian National Committee of America. “Today’s unanimous Senate action shines a spotlight on the president, who continues — against all reason — to enforce [President Recep Tayyip Erdogan’s] veto against honest American remembrance of Turkey’s extermination and exile of millions of Christians.”

The passage of today’s resolution marks another significant victory for both the Armenian National Committee of America and the Armenian Assembly of America, which respectively spent at least $90,000 and $80,000 this year lobbying Congress to recognize the genocide, among other issues. Their cause has also received a significant boost from high-profile celebrities — including US reality television star Kim Kardashian and Dean Cain, best known for his role as Superman.

That dynamic changed after Turkey’s October offensive against the Syrian Kurdish People’s Protection Units. The Turkish ambassador to the United States, Serdar Kilic, warned Congress of permanent “negative resentment” between the two NATO allies shortly before the Syria offensive prompted House leadership to put the Armenian genocide resolution on the floor.

Kilic also unsuccessfully lobbied Congress to drop a provision from the annual defense authorization bill that would lift the arms embargo on Cyprus — another initiative spearheaded by Menendez. Congress nonetheless included that provision in the final version of the bill, which the House overwhelmingly passed 377-48 Wednesday. However, the final language only lifts the embargo if Cyprus complies with anti-money laundering regulations and blocks Russian military ships from refueling at Cypriot ports.

And while Trump booted Ankara from the F-35 co-production program earlier this year over its purchase of the Russian-made S-400 missile defense system, the defense bill permanently bans the transfer of the fighter jets to Turkey until it ditches the Russian missile system.

Washington fears that Moscow could use the powerful S-400 radar system to spy on US-made military hardware. Turkey tested the radar on US-made aircraft last month, prompting Trump’s Republican allies to once again call on him to sanction Turkey under a 2017 law penalizing countries for transacting with Russia’s defense sector. The defense bill also includes language calling on Trump to implement the legally mandated sanctions on Turkey for the S-400 purchase.

Meanwhile, the Senate Foreign Relations Committee advanced its own Turkey sanctions bill 18-4 Wednesday, prompting the Turkish Foreign Ministry to blast the bill as “yet another manifestation of the disrespect shown toward our sovereign decisions concerning our national security.”

“The legislation will put in place a number of incentives that we hope will result in President Erdogan making the choice to walk away from the S-400,” said Chairman James Risch, R-Idaho, who introduced the sanctions bill with Menendez.

Risch’s bill would ban Turkey from acquiring both the F-35 and F-16 aircraft unless it relinquishes the S-400 system. It also requires Trump to sanction Turkey under the 2017 Countering America’s Adversaries Through Sanctions Act.

Finally, the Risch bill would require Trump to levy myriad sanctions on Turkey until it ends its offensive against the Syrian Kurds. These include extensive restrictions on arms transfers to Turkey and sanctions on the state-run Halkbank.

After the House passed a broader Turkey sanctions bill 403-16 in October, Senate Majority Leader Mitch McConnell, R-Ky., indicated that he would not put the legislation on the floor, arguing that it was too broad and unlikely to alter Ankara’s behavior.

Risch and Menendez sought to address these concerns in the committee by creating more targeted sanctions and expanding the president’s waiver authority.

And while Risch noted that he’s working on an agreement with McConnell to secure a floor vote, it remains unclear whether the Republican leader will want to challenge Trump with potentially veto-proof legislation as he continues to tread lightly with Erdogan.