After years of fighting, it seems that Saudi Arabia, which is leading a military coalition in Yemen, is holding indirect talks with Houthi rebels to possibly reach a solution. 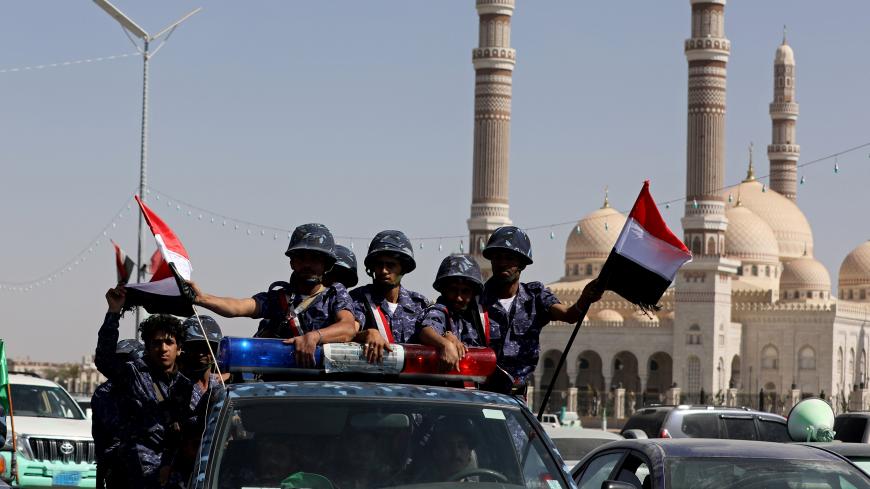 Houthi police troopers ride on the back of a patrol truck, Sanaa, Yemen, Nov. 5, 2019. - REUTERS/Khaled Abdullah

Nearly five years into the fierce war in Yemen, signs of an end to the fighting have emerged. It seems an international desire for peace in Yemen has been gaining strength, including in the United States. This comes after voices were raised in several European countries, including Germany, for a halt to weapons exports to Saudi Arabia; this is not to mention similar efforts in the US Congress.

Meanwhile, the Houthi movement’s weapons have enabled it to achieve deterrence; the Houthis claimed responsibility for the bombing of Aramco Oil Co. in September in Saudi Arabia and has claimed to have downed drones, including US ones.

Riyadh has been unable to achieve any of its stated objectives, such as overthrowing the Houthis and restoring the legitimate government. This has been a burden on Saudi allies in Washington because of the prolonged war and its repercussions on the deteriorating humanitarian situation in Yemen, especially as US elections approach. All this has contributed to cause many to think that dialogue is closer to being a solution than continued war.

In September, Washington announced talks with the Houthis. “We are, to the extent possible, talking with the Houthis to try and find a mutually agreeable negotiated solution to the conflict in Yemen,” David Schenker, assistant secretary for Near Eastern affairs, said during a visit to Saudi Arabia in September. He added, “Our focus is on ending the war in Yemen.”

The US move was offset when an anonymous Saudi official said Nov. 6 that “there has been an open [communication] channel since 2016 with the Houthis to support peace in Yemen,” adding, “We do not close our portals with the Houthis.”

On Sept. 20, the Houthis announced a “peace initiative” with Riyadh, and they now seem to be closer to a solution than ever before, especially after their rivals reached the Riyadh Agreement, which united all Yemeni forces loyal to the Saudi-UAE alliance. In addition, protests are growing in countries where the Houthis have allies, putting pressure on the governments in Iraq, Lebanon and Iran. All these could be factors indicating that both the Houthis and Saudi Arabia alike are closer to a peaceful solution that satisfies both sides, and this time with an added US push.

On Nov. 11, Saudi Vice Minister of Defense Prince Khalid bin Salman visited Oman; this overshadowed ongoing consultations between Washington and Riyadh with the Houthis in Muscat, especially after the vice minister was assigned to manage the Yemeni dossier.

“Direct US-Saudi negotiations with the Houthis are very possible, especially in Muscat, since some Houthi leaders are there,” said Nabeel Khoury, the former deputy chief of mission at the US Embassy in Sanaa.

He told Al-Monitor, “The Americans prefer direct negotiations, especially as they had already concluded some with the Houthis in the days of John Kerry [when he was secretary of state]. Meanwhile, Saudi Arabia has its own reasons to start these negotiations with the Houthis, and the US encouragement is useful here.”

Khoury said, “The war has exhausted Saudi Arabia financially and the worsening military situation in its south is not in its best interest. The fact that Prince Khalid has been assigned the Yemeni dossier is positive because it is a complicated issue and it needs a full-time decision-maker who [Crown Prince] Mohammed bin Salman trusts.” The two are brothers.

Khoury said, “The bombing of Aramco is one of the reasons that led to the negotiations because it increased the cost of war and raised fears of damaging the Saudi economy should the war continue.”

He added, “The obstacle to consultations is the lack of trust between the parties to implement any agreement they may reach.”

The results of any possible settlement are yet to be clear, but there are likely serious intentions to halt the dynamics of the war, as a comprehensive calm has prevailed on the fighting fronts, while the Houthis have put the brakes on their missiles and drones launched toward Saudi Arabia and the United Arab Emirates.

Jamal Amer, a member of the Houthi delegation at the Sweden talks, told Al-Monitor, “We are communicating with the Americans, and the importance of the issue is what determines the quality of either direct or indirect communication.”

“It is the most influential party on the Saudi regime, and it sought to mediate negotiations with Sanaa,” he said.

“The biggest motivation for Riyadh entering in direct dialogue with Ansar Allah [the Houthis] came after the attack on the Aramco facility. It was also due to Riyadh's disappointment with [US President Donald] Trump's apathetic reaction after the attack,” Amer said, adding, “There are two Saudi military and political committees. The first communicated with the Sanaa military committee through video calls to discuss the military truce, and the other committee communicated more through intermediaries, including Oman.”

He said Prince Khalid’s visit to Oman involved several areas of interest, including the sultanate's intervention to find an approach between Houthis and Saudi Arabia for stopping the war as a prelude to reaching political negotiations.

It seems clear that Riyadh wants to get out of the impasse of war in Yemen while saving face. It thus seeks, with US support, an agreement with the Houthis, following the Riyadh Agreement it achieved among its allies, to gather momentum to nurture a comprehensive agreement among all Yemeni components, ultimately for a political solution.

However, Riyadh fears that the Houthis will expand their influence in Yemen if a peace agreement is signed, especially near Saudi Arabia's southern border, as the Saudis consider the Houthis to be an extension of Iranian influence in the region. At the least, Riyadh would seek a fair and equitable relationship with the Houthis if they manage to rule Yemen, or at least the northern part of northern Yemen.

by Murielle KASPRZAK and Joseph SCHMID | AFP | May 26, 2022
END_OF_DOCUMENT_TOKEN_TO_BE_REPLACED