Crowds threw stones and eggs at Turkish-Russian convoys as they entered the predominantly Kurdish town of Kobani in northern Syria. 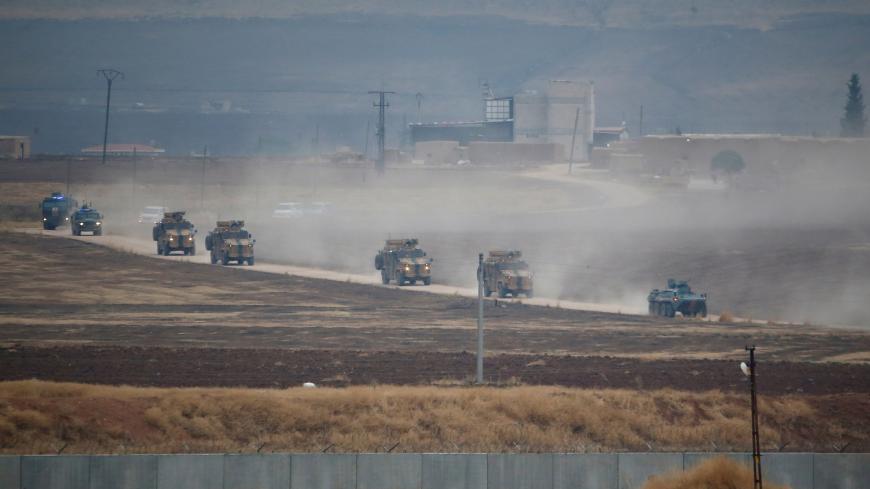 Turkish and Russian military vehicles return following a joint patrol in northeast Syria, as they are pictured from near the Turkish border town of Kiziltepe in Mardin province, Turkey, Nov. 1, 2019. - REUTERS/Kemal Aslan

Turkish and Russian troops in armored vehicles were pelted with rocks and eggs by a jeering crowd during their second joint ground patrol in northern Syria today, near Kobani, a predominantly Kurdish town on the Turkish border that was a symbol of resistance against the Islamic State and now Turkey.

Men, women and children gathered to protest the convoy, chanting anti-Turkish slogans and flashing victory signs. “We are Kurds. We are proud. We want our rights. Turkey can never annihilate us,” shouted a woman in a video shared on social media.

The reception bodes ill for Turkey’s plans to gain a foothold in Kurdish territories, where hostility toward the Turkish army is mounting by the minute since its Oct. 9 assault against the US-backed People’s Protection Units (YPG).

The patrol falls under a deal signed by Turkey and Russia stating that YPG fighters are to be pushed 30 kilometers (19 miles) from the Turkish border to address the security threat posed by the group.

But the arrangement looks increasingly fragile, as Turkish-backed Sunni rebel fighters, including jihadis, clashed with the Syrian army over the weekend near the town of Tell Tamar on the strategic M4 highway. Any further escalation might draw Turkey into a war against Syria, something it has avoided since the start of the civil conflict in 2011.

The Syrian army and the YPG appear to be acting in concert to prevent Turkey from snatching more territory, part of a deal they struck after Donald Trump ordered US troops to pull back from the Turkish border, allowing the Turkish army to wade in.

The US withdrawal eased Turkey’s invasion of a swath of territory between the towns of Ras al-Ain and Tell Abyad. YPG forces were meant to pull back from that area to adhere to the cease-fire Vice President Mike Pence brokered with Turkish President Recep Tayyip Erdogan last month. That deal isn’t looking too bright either.

Erdogan, in a speech to the Turkish parliament today, complained that Washington wasn’t abiding by the cease-fire. He said the YPG had not been cleared from the designated zone and that US forces were still conducting patrols with the Syrian Kurdish forces there.

“How can we explain America holding patrols with a terrorist organization in this region even though they made the decision to withdraw?” Erdogan said.

He also took a swipe at Russia, saying the YPG had not left Tell Rifaat or Manbij. Russian military police and Syrian government forces control Tell Rifaat, and Manbij fell under their control when US forces departed the town, which it controlled with the YPG.

“We are bound by agreements with the United States and Russia," Erdogan said. "They cannot dupe us by claiming to have removed the terrorists. We cannot stand by idly before this situation. We shall do what we need to do.”

The Turkish leader added that in light of such developments he had not decided whether to accept Trump’s invitation to the White House on Nov. 13. “I will first speak with Trump over the telephone," he said. "Based on that conversation I will make a decision.”

The waters have been further muddied by Trump’s flip-flopping over the withdrawal of US troops from Syria. After being ordered to fully withdraw from northern Syria last month, some 900 US troops have reentered the country to guard oil fields under YPG control in Deir ez-Zor and Rmeilan.

In a related development, Russian Foreign Minister Sergey Lavrov insisted that the Turkish-Russian agreement was being implemented in full. He lashed out at Washington at a news conference today, stating that the United States’ “inconsistent actions” in Syria stood in the way of a political settlement to the conflict.

“The fact that the US claims to leave and then claims to return means that it might claim to leave tomorrow,” Lavrov said. The Syrian Kurds feel the same way and are sending out feelers to Assad while calling on the United States to establish a no-fly zone to protect them from Turkey and other aggressors.

The Kurds hope the continued US presence will spur Damascus to accommodate their demands for administrative autonomy. Assad extended something of an olive branch in an Oct. 31 interview, saying he did not expect the Kurds “to hand over their weapons immediately.” While he insisted that the Syrian state would regain full authority over the Kurdish-run region, he said that “our policy should be gradual and rational and should take the facts into account.”

The YPG’s political arm, the Syrian Democratic Council, said Assad’s comments were positive and that it was open to dialogue without preconditions. “If Damascus’ attitude toward us has become positive, we greet this with respect and will regard it as a necessary step for the resistance of our people, laying the ground for the liberation of every inch of Syrian land,” the council said in a statement.