Russia's foreign minister has demanded Turkey end tensions in Syria's Idlib, indicating Russia will continue to use Idlib as a pressure point to keep Ankara in line. 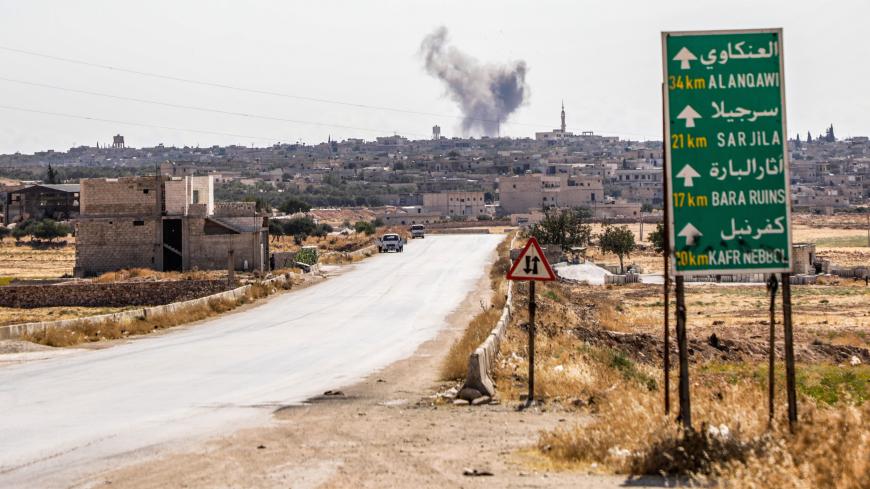 Russian Foreign Minister Sergey Lavrov called on Turkey to fulfill its responsibilities to end tensions in the rebel-held Syrian province of Idlib today, saying Ankara needed to distinguish between Jabhat al-Nusra terrorists and Syrian rebels. Lavrov’s comments, made during an official visit to Armenia, were seen as a fresh rebuke to Turkey over its reluctance to confront the militant opposition group known as Hayat Tahrir al-Sham, which remains entrenched in Idlib and is led by former members of the al-Qaeda-linked Jabhat al-Nusra.

Turkish President Recep Tayyip Erdogan and his Russian counterpart Vladimir Putin spoke on the phone Sunday to discuss developments in Syria ahead of the Turkish leader’s Nov. 13 meeting in Washington with President Donald Trump.

Erdogan will have likely reassured Putin that he has no intention of succumbing to US pressure to scrap plans to activate the S-400 missile batteries it is in the process of acquiring from Russia. But Lavrov's pinpricks today suggest that Russia will continue to use Idlib as a pressure point to keep Ankara in line.

Turkey maintains 12 military observation posts in Idlib, part of a mission to deconflict Syrian government and opposition forces but more broadly to forestall a full-scale Syrian government attack. Russia wants Ankara to clear the way for the Syrian army’s Russian-backed campaign to retake the province. Turkey fears that such an onslaught would drive hundreds of thousands of more displaced Syrians toward its borders as Erdogan’s government faces mounting public malcontent over the presence of more than 3.7 million Syrians, the highest number of refugees in the world.

Meanwhile, in an Oct. 31 interview, Syrian President Bashar al-Assad accused Ankara of failing to stick with its pledge to leave Idlib, a jihadi hotbed where Islamic State leader Abu Bakr al-Baghdadi was killed in an October raid by US special forces. “There is an agreement through the Astana Process that the Turks will leave. The Turks did not abide by this agreement, but we are liberating Idlib,” he said. Assad was referring to Turkey, Russia and Iran’s ongoing efforts to end the civil war initiated in the Kazakh capital of Nur-Sultan, formerly known as Astana.

At least seven civilians including three children were killed by Russian airstrikes in Idlib’s Kafr Ruma on Sunday, according to the British-based Syrian Observatory for Human Rights.

Turkey and its Syrian rebel allies are already stretched in Syria, where Ankara controls Kurdish-majority Afrin and Jarablus, and since its Oct. 9 assault against US-backed Syrian Kurdish forces in a 70-mile (113-kilometer) stretch of territory running between the towns of Tell Abyad and Ras al-Ain.

On Sunday eight civilians were reportedly killed near Tell Abyad in the village of Suluk after a bomb exploded there. Turkey blamed the explosion on the Syrian Kurdish militia. They have denied responsibility for the attack, charging in turn that former Islamic State and Jabhat al-Nusra elements are fighting alongside the Turkish army and committing atrocities.

Skirmishes are erupting almost daily between Turkish-backed and Syrian government forces in and around the town of Tel Tamer, a strategic outpost on the M4 highway. Turkey wants to implant itself on the artery so as to cement the truncation of Kurdish-majority areas lying east and and west of its condominium in Ras al-Ain and Tell Abyad.

Erdogan has accused both the United States and Russia of failing to clear Turkey’s border of the Syrian Kurdish group known as the People’s Protection Units (YPG) in keeping with separate cease-fire agreements struck last month. Today Russian and Turkish forces launched their fourth joint patrol in the al-Darbasiyah region east of the Euphrates River, part of the agreement signed between Erdogan and Putin in Sochi on Oct. 22 that calls for the YPG to pull back some 18 miles (30 kilometers) from the Turkish border.

But while Russian military police and Syrian forces have replaced YPG units stationed there since last month’s withdrawal by the United States, the Syrian militia maintains its presence within Tell Rifaat, Manbij and Kobani, among other places.

An official in the YPG-dominated Syrian Democratic Forces confirmed to Al-Monitor that all US forces will evacuate their base in Kobani by Nov. 19. The pullout is fanning fears that Turkey will target Kobani next.

Meanwhile, a former British army intelligence officer widely hailed as a hero for humanitarian work in Syria and maligned by Russia for “aiding terrorists” was found dead in Istanbul today.

James Le Mesurier was a co-founder of the White Helmets, the civil defense group formed by volunteers who have rescued tens of thousands of civilians caught up in Syrian army attacks on opposition-held territory since 2014. The group continues its work in Idlib. He also ran Mayday Rescue, a globally funded outfit that helped train White Helmet volunteers.

Turkish authorities have launched what the Istanbul governor’s office called “a comprehensive investigation” into the death of Le Mesurier, whose body was discovered at about 4:30 a.m. local time outside his office in the port district of Karakoy in the heart of Istanbul’s European side.

Turkey’s Ihlas news agency shared video of Mesurier’s lifeless corpse on the ground. He was wearing a white shirt and trousers with a red belt. His wife, who learned of his death only after police woke her up, reportedly told them that her husband had been suffering from depression and had been using sleeping pills. Le Measurier is believed to have fallen to his death from the office balcony.

Police sources cited in the Turkish media said there was no evidence that anyone other than the couple had entered the office, which can only be accessed by a fingerprint scan.

But speculation of foul play inevitably surfaced together with news of Le Mesurier’s death.

Russian Foreign Ministry spokesperson Maria Zakharova had as recently as Nov 8. claimed that he “is a former agent of Britain’s M16, who has been spotted all around the world, including the Balkans and the Middle East. His connections to terrorist groups were reported during his mission in Kosovo.”

Le Mesurier became a target of Russian and Syrian government disinformation campaigns for documenting and publicizing attacks — including barrel bomb and chemical attacks against opposition-held areas, affecting thousands of civilians.

Elizabeth Tsurkov is a fellow at the Philadelphia-based Foreign Policy Research Institute who covers Syria. She told Al-Monitor, “James was an individual committed to saving as many Syrians as possible at a time when most countries did nothing to help them. The White Helmets was responsible for saving thousands of lives and Mayday was its main supporter.”

She continued, “He was a deeply decent and courageous man who withstood years of Russian-led propaganda against him and the White Helmets. It's because they document war crimes that Russia carries out in Syria and their aftermath such as bombing of hospitals schools and killing civilians. Despite this misinformation, James and Mayday and the White Helmets continued their work. His death is a terrible loss for humanity.”