After last week’s meeting between the US and Turkish presidents, some in Washington seem hopeful Turkey won't activate its Russian-made S-400 missile system, but Ankara insists Turkey didn’t buy the $2 billion weapons system to mothball it. 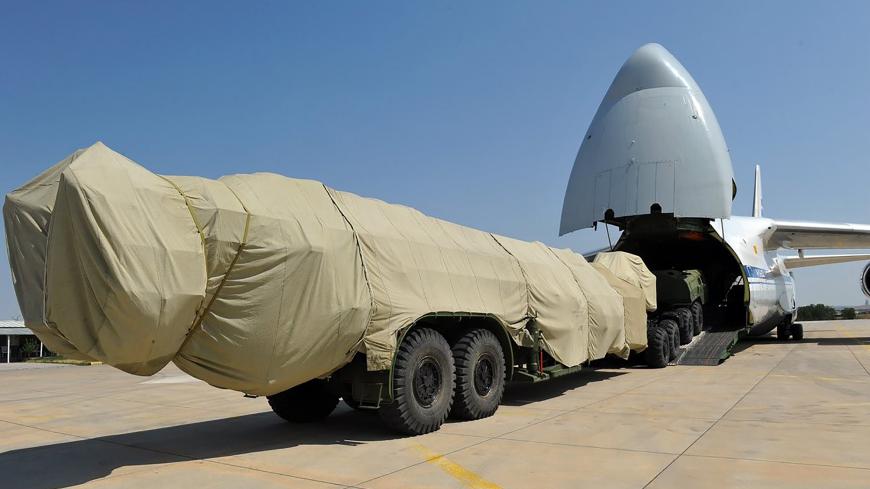 ISTANBUL — Turkey is pushing ahead with plans to activate a Russian antiaircraft system despite persistent warnings from the United States the move will unleash economic sanctions, apparently betting that Washington won’t follow through on its threats to punish a strategic ally it does not want to lose to Russia.

Turkish President Recep Tayyip Erdogan met his counterpart Donald Trump at the White House last week, and while they failed to reach a breakthrough in the dispute over Turkey’s acquisition of the advanced S-400 missile system, they both heralded the friendly meeting as a “new page” in Turkish-US ties.

They left a litany of other disputes unresolved, including a criminal lawsuit against a Turkish state bank for allegedly helping Iran dodge sanctions that could potentially harm the country’s entire banking system and Turkey’s incursion into Syria last month to fight US-allied Kurdish militants that had forced US forces to hastily withdraw.

On Monday, Erdogan delivered a veiled swipe against Trump, who said last week he left some troops behind in Syria “only for the oil.” Erdogan hinted that Turkey had been invited to reap the spoils as well.

“Some people are now divvying up the oil. They proposed it to us too. We said, ‘Our worry is not oil, our worry is people.’ As several countries are arm-in-arm with terrorist organizations for oil, we stick to our honorable stance,” he said in a speech, referring to the Kurdish-dominated Syrian Democratic Forces, which Turkey considers a terror group for its links to insurgents in Turkey, its main justification for entering Syria.

A ceasefire is largely holding in northeast Syria. But Foreign Minister Mevlut Cavusoglu on Monday renewed a threat to restart the campaign against the SDF if both Russia and the United States fail to ”cleanse” the area of the militants, whom Turkey accuses of intermittent attacks. Turkey agreed with the US, then Russia, last month to halt operations if the SDF left a large border area.

Yet the main sticking point in Turkey’s troubled relationship with the United States is its acquisition of the S-400s, which the United States fears will undermine NATO’s security infrastructure and encourage other allies to forgo US-made weapons for Russia’s cheaper — and some say superior — systems. A statement from the White House after the meeting said the S-400s matter must be settled before progress can be made on the two countries’ other issues.

Since returning to Turkey, Erdogan and other top officials have been clear they are keeping the Russian missiles. On Friday, Ibrahim Kalin, a senior adviser to Erdogan, told the state broadcaster, “There will be no step back on the S-400s. Turkey will activate the S-400s.”

Kalin pointed out that the United States’ threats to sanction Turkey when it inked the deal with Russia, then again when the components arrived in Turkey, have proven toothless. “Parts of Congress, the arms lobby and those circles that are disturbed by Turkey acting independently and sovereignly may misinform and try to provoke Congress against Turkey by now trying to quickly impose sanctions,” he said.

“This won’t be the end of the world [but] it will negatively affect relations from every angle. It won’t be just Turkey that loses, but the United States too,” he said, adding that it would amount to “pushing Turkey to the other side when you say you see Turkey as an ally in the transatlantic Western alliance.”

Erdogan did persuade Trump to set up a joint mechanism he hopes will alleviate US concerns surrounding implementation of a Russian-made system designed to shoot down NATO planes. Kalin said he and US national security adviser Robert O’Brien have already begun discussions and that the S-400s do not have to be integrated into Turkey’s existing air defenses and can be used as a standalone system.

Those talks are also aimed at ending a standoff with Turkey over the US-led F-35 jet program, Kalin said. Washington removed Turkey from the F-35 fifth-generation joint strike fighter program in July after the first S-400 batteries reached Turkish soil. Kalin said kicking out Turkey, which is manufacturing components for the jets, would add a few billion dollars in additional costs to the $400 billion program, already the most expensive weapons project in history.

“The US seems to insist on wishful thinking. Turkey is not going to give the S-400s back or keep them as a 2 billion dollar paperweight,” Howard Eissenstat, a senior fellow at the Project on Middle East Democracy, wrote in a tweet. “Right now, the question is how to manage a marriage, where divorce is unlikely, but where there is little love and the partners are often working at cross purposes.”

Indeed, US officials seem to be holding out hope Turkey can still be wooed. The head of the Senate Foreign Relations Committee said last week he expected “movement” from Turkey soon and that Congress should wait to sanction Turkey on its Syria incursion in the hope the dispute over the Russian missiles will be resolved.

“A system is purchased to be used. … If you are paying all of this money for a system, it’s wrong to say, ‘We won’t use them for someone else’s sake,’” Ismail Demir, who heads the state’s Undersecretariat for Defense Industries, told CNN Turk on Saturday. “We have relations with both Russia and the US, and they both have their parameters. We are a country that stands by its signature.” He said the weapons will be ready for use by April 2020.

Erdogan has stressed that he does not want any deal with the United States to harm relations with Russia. President Vladimir Putin has cultivated close ties with Erdogan in recent years that bore fruit last month when Trump, under pressure from Turkey, pulled troops out of northeast Syria, leaving the area to Russia, the Syrian government and Turkey. Kalin said that Putin will visit Turkey in early January.

For its part, Russia sees the S-400 deliveries on track, with a senior defense industry official saying the missiles will be ready for use by next spring. Turkey is also looking at more Russian hardware: It’s considering a proposal to buy the Su-35 jet and the fifth-generation Su-57 aircraft, according to the TASS news agency on Monday.

Amid the handwringing in Washington over whether Turkey’s appetite for Russian weapons signals a strategic break with the West, Erdogan may just be hedging amid a shifting world order. Trump’s radical foreign policies — from pulling out of treaties to questioning Cold War allies — may hasten what some see as a decline in US dominance that began before his presidency.

"Around the world there are areas of convergence with Moscow, and you have a Turkish political leadership who thinks the US is in decline and that Turkey should expand its options with global powers: China, Russia, the European Union, the US,” said Aaron Stein, director of the Middle East Program at the Foreign Policy Research Institute. “Turkey will not be bound by a sphere."