The US president said his Turkish counterpart Recep Tayyip Erdogan has been treated unfairly over his decision to buy Russian-made missiles that may jeopardize NATO security. But he stopped short of saying they have a deal to spare Turkey economic sanctions once it acquires the antiaircraft system. 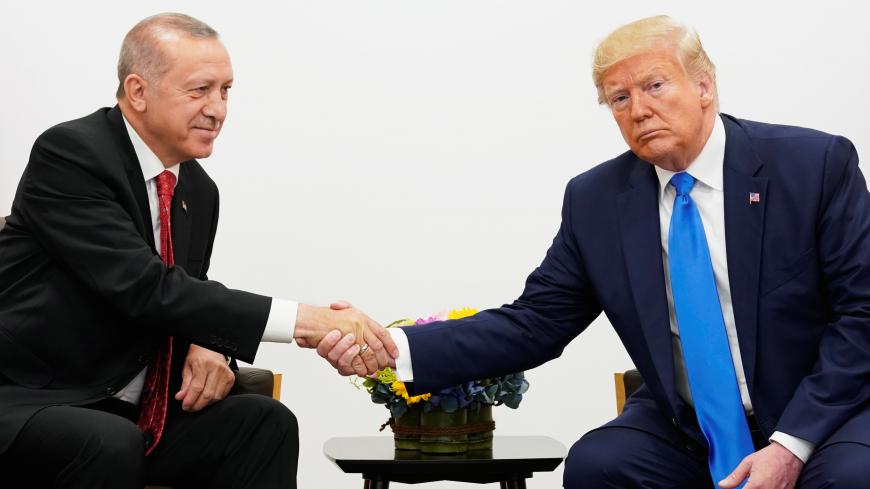 ISTANBUL — US President Donald Trump on Saturday blamed his predecessor, Barack Obama, for Turkey’s decision to buy advanced Russian missiles that his administration has warned could endanger NATO security and pledged to find a way out of the dispute that has rattled the countries’ decades-old alliance.

Yet Trump stopped short of announcing a breakthrough with his Turkish counterpart, Recep Tayyip Erdogan, with just weeks to go before Turkey takes delivery of the Russian-made S-400 Triumph. That acquisition will put Turkey at risk of US economic sanctions and expulsion from the Pentagon’s F-35 fighter jet program. Turkey says it needs the Russian weapons, widely considered the most advanced antiaircraft system available, because Washington has refused to transfer technology with its own offer of American missiles.

“We have a complicated situation because the president was not allowed to buy the Patriot missiles, so he bought the other ones — the S-200s [sic] or 400s,” Trump said. “He wasn’t allowed by the Obama administration to buy it until after he made a deal to buy other missiles. So he buys the other missiles, and then all of sudden, they say, ‘Well, you can now buy our missiles.’ You can’t do business that way. It’s not good.”

However, the Obama administration agreed in 2013 to sell Turkey American Patriot missiles. Under Trump, the State Department also cleared the sale, estimated at $3.5 billion, in December.

Trump acknowledged that the issue remains unresolved. His own Defense Department and intelligence community worry that deploying both the S-400s and the F-35s — the very planes the Russian batteries are built to shoot down — on Turkish soil will harm NATO assets. But in his brief comments, Trump repeated four more times that blame for the dispute lay squarely with Obama.

“It’s a problem, there’s no question about it. We’re looking at different solutions. … It’s a two-way street,” Trump said, skipping a question from the press about whether the United States would go ahead with sanctions. “He’s a NATO member, and he’s someone I’ve become friendly with, and you have to treat people fairly. I don’t think he was treated fairly.”

Trump’s full-throated defense of Erdogan’s choice was a major vindication for the Turkish leader, who had said he was confident he would win over Trump. Erdogan blames “lower levels” of the US government for seeking to punish Turkey if it goes ahead with the $2.5 billion deal with Moscow.

Erdogan said at another press conference that Trump assured him Turkey would not be sanctioned. But the power to sanction Turkey rests largely with the US Congress, which in 2017 passed legislation requiring penalties on entities that make major purchases of Russian military hardware. The rules also require congressional review if the president seeks to lift or ease sanctions — a move designed, some observers have said, to limit Trump’s ability to soften up on Russia amid persistent worries he is preternaturally deferential to President Vladimir Putin.

“Even if Trump thinks this is all Obama's fault, that won't make the congressional sanctions go away,” Nicholas Danforth, a senior visiting fellow at the German Marshall Fund, told Al-Monitor. “Trump-Erdogan discussions have taken on a farcical quality. Every time they talk the pattern is the same: Trump says something sympathetic but confused, Erdogan declares victory, and then a little while later we discover nothing has really changed.”

Legislation to block the transfer of F-35s to Turkey once it receives the S-400s is already moving through the US Senate. Trump said at another briefing Saturday that Turkey’s payments for both the US fighter planes and the S-400s have created “a mess … and honestly, it’s not really Erdogan’s fault.”

Trump also said he has been invited to Turkey and he would go but that a date had not yet been set. Erdogan said this week a July visit was under discussion. The White House followed up their with a statement suggesting Trump was tougher on Erdogan than his demeanor during their appearance before the cameras indicated, according to news reports.

Before meeting Trump, Erdogan held talks at the G-20 with Putin and indicated the S-400 deal with Russia was unimpeded, with “eyes on the delivery.” The Turkish president has repeatedly said he will not forgo the Russian weapons.

Reneging on the deal with Russia would come at a cost, not least for Turkey’s objectives in northwest Syria, where Erdogan and Putin have brokered a shaky cease-fire to protect the 3 million civilians sheltering in Idlib against Russian-backed Syrian government attacks.

On Thursday, Syrian forces shelled a Turkish military outpost monitoring a deescalation zone, killing a Turkish soldier and wounding three others, according to the Turkish Defense Ministry. More shelling occurred Saturday without loss of life, it said. Some analysts said the attacks serve as message from Putin to not waver on the S-400s.

The US embassy that closed in Damascus, Syria, in 2012 and that now operates from other locations expressed condolences for the soldier and support for Turkey’s efforts to keep the peace in Idlib. “We reiterate our condemnation of Assad’s and Russia’s escalatory attacks against the Idlib ceasefire zone,” the embassy said in a tweet.

At the heart of the diplomatic imbroglio over the S-400s is Washington’s fear that Turkey, a member of NATO since 1952, is breaking free of US influence for a new partnership with Russia. Erdogan’s growing proximity to Putin coincides with a broader erosion in Turkey’s Western orientation, including its record on democratic rights under Erdogan’s authoritarian style of rule.

However, Trump appears unconcerned with Turkey’s democratic track record. While he used sanctions and tariffs to force Erdogan to free an American pastor jailed in Turkey last year, an unknown number of other Americans, who are believed to be Muslims, remain in Turkish prisons after being swept up in a crackdown following a 2016 military coup attempt against Erdogan.

Turkish employees at US consulates in Turkey have also been arrested. This week, a court freed one of those workers, Nazmi Mete Canturk, from house arrest while his and his family’s trial on coup-related charges continues. However, another court on Friday refused to free Metin Topuz, who worked for the U.S. Drug Enforcement Administration and has been in jail since 2017 on similar charges.

Despite the rocky relationship, Saturday’s meeting was a chance for Trump to reaffirm his warm feelings for Erdogan, whom he called a “close friend who is easy to deal with.” He also praised members of the Turkish Cabinet who accompanied their boss as straight out of “central casting. There’s no Hollywood set where you could produce people who looked like that,” he said, eliciting chuckles from the usually somber Turkish officials.