Can Trump, Erdogan pick up the pieces in Syria?

Putin gains from the fallout in US-Turkey ties and the Kurds are still counting on US influence with Ankara. 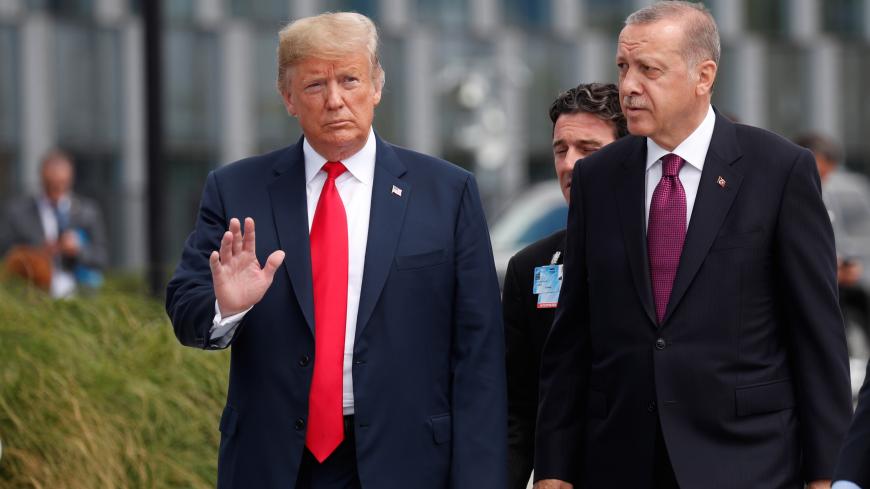 US President Donald Trump and his Turkish counterpart, Recep Tayyip Erdogan, meet in Washington on Nov. 13. For the sake of US-Turkish relations, or what remains of them, they need a "good meeting." Trump refers to Erdogan as his “friend” and a “hell of a leader.” The stakes are high. If bilateral ties worsen, the winner is Russian President Vladimir Putin and the losers are the Syrian Kurds, who are still counting on US influence with Ankara.

Both Trump and Erdogan operate by summit and personal connections. They know and like each other. Their bureaucracies and staff are mostly background noise until the two presidents meet or talk. Only then do things happen, for better or worse, depending on your perspective.

There is some urgency to this summit. US-Turkey relations, which have been bad for a while, are a train wreck after widespread criticism that Trump "betrayed" the Syrian Kurds by announcing a withdrawal of US forces from Syria on Oct. 6. Three days later, Turkey invaded Syria in a move it dubbed "Operation Peace Spring" to wipe out the Kurdish "terrorists" — who just happen be Washington’s on-the-ground partners against the Islamic State.

The United States and Turkey, NATO allies, don’t and won’t agree on the Syrian Kurds — specifically, the Kurdistan Democratic Union (PYD) and the People’s Protection Units (YPG) — which make up the bulk of the Syrian Democratic Forces (SDF). The United States successfully partnered with the SDF against IS in Syria. Erdogan considers the PYD/YPG to be the Syrian branch of the Kurdistan Workers Party (PKK), which Turkey and the US both have labeled a terrorist group. Washington sees shades of grey between the YPG/PYD and the Turkey-based PKK. For Erdogan, the PYD/YPG/PKK is equivalent to or worse than IS.

The Kurds have a reservoir of good will among the US military, who have worked with them in the battle against extremists, and with key members of Congress. Meanwhile, US-Turkey relations have sunk over differences in Syria, Ankara’s ties to Moscow and Turkey’s treatment of journalists and activists.

Trump, unlike his critics on this issue, has neither the passionate attachment to the Kurds nor the animus to Turkey. “They’re no angels,” he said of the Kurds, while acknowledging their mettle as fighters and partners. He has no interest in taking sides between Turkey and the Kurds.

The Kurds always understood their engagement with the United States to be transactional. That’s par for the course in the Middle East, but often lost on the Beltway.

The United States never had a formal commitment to defend the Kurds against Turkey or Syria. The US partnership with the SDF was about fighting IS. And if anyone thought otherwise, Trump’s initial decision to withdraw US troops from Syria in December 2018 after a call with Erdogan (which his staff worked overtime to reverse) should have served notice that a repeat performance was just a phone call away.

The PYD/YPG never shut down contact with Bashar al-Assad’s government. Mahmut Bozarslan broke the story for Al-Monitor of a meeting between Syrian government and Kurdish representatives, mediated by Russian officials, at Khmeimim air base in October 2016 — three years ago. SDF commander Mazloum Kobane told Amberin Zaman in March 2019, “We are ultimately part of Syria. We do not wish to separate from Syria. If there is to be a lasting solution for this region, it needs to be with Damascus.” Kobane said meetings between their delegations had taken place and there was “no enmity” with the Assad government.

And that is why the SDF quickly cut a deal with Damascus within a week after Trump announced the withdrawal. Kobane and his compatriots are not just victims; they are sophisticated actors. Zaman explains how the SDF is playing the angles, leveraging the United States against Syria for the best deal possible with Assad when the time comes.

Third, the United States is actually still working with the SDF to combat IS and to hold the oil fields east of the Euphrates, as Jack Detsch explains. There are questions whether the United States has the authority for such a mission. The Pentagon is already making the case that control of the oil fields is simply an extension of the anti-IS campaign and a benefit to the SDF. Democratic presidential candidate Rep. Tulsi Gabbard (D-HI) has introduced a resolution questioning such a deployment, Bryant Harris reports.

The man behind the curtain

Russian President Vladimir Putin looms over this summit. Assad last week confirmed that Moscow has been facilitating Turkey-Syria talks. Putin, as noted above, helped facilitate the early contacts with the Kurds. And he keeps Israel close in his shuttle diplomacy on Syria, trying to prevent an escalation involving Iran.

The so-called Astana trio — Putin, Erdogan and Iran President Hassan Rouhani — have hung together despite many differences. The Astana foreign ministers were front and center at the first meeting of the UN brokered the 150 member Syrian Constitutional Committee in Geneva last week. The Astana Group is also driving the action on the eventual return of refugees and the how to deal with the roughly 10,000 terrorists in Idlib.

War a ‘"itmus test" for US ties

Erdogan said this week that Operation Peace Spring was a “litmus test” for Turkey’s friends. He considers Trump a friend and he expects a sympathetic ear — not threats of sanctions.

Trump imposed sanctions on Turkey on Oct. 14. The US-Turkey joint statement, negotiated on Oct. 17, committed Turkey to a "pause" within five days to allow the withdrawal of YPG forces from the Turkish safe zone and an eventual cease-fire. Trump announced Turkish compliance with the agreement and lifted sanctions on Oct. 23.

There are those clamoring for Trump to sanction Turkey for violating the cease-fire and perhaps for atrocities and violations of human rights by the Turkish-backed Syrian proxy force, the so-called Syrian National Army (SNA), which includes discredited opposition groups that once actually received some US support and features a heavy jihadi element, as Fehim Tastekin explains.

A bill to impose more sanctions passed the House 403-16 on Oct. 29, but has yet to be taken up in the Senate, where there are similar sanctions bills. The New York Times reported an internal memo by US Deputy Syria Envoy William Roebuck stating that the SNA (including "armed Islamist groups") and Turkish forces may have committed war crimes. US Envoy James Jeffrey is in Turkey to address these and other issues in advance of the summit next week.

Trump could be persuaded by Erdogan that the YPG “are not gone yet” from the safe zone — so the burden is on the Kurds, not Turkey. There is also the fog of war argument. A senior State Department official said this week, "We’re still on a where-the-edges-are question as opposed to any major Turkish offensive that would clearly mark a, quote, 'violation' of the understandings.”

Trump may be particularly well suited to the transactional nature of dealing in the Middle East. Erdogan should know that the United States considers the SDF a valuable partner, and as long as its fighters are positioned outside the safe zone, Turkey needs to lay off or the sanctions come back on. And he should know that Turkey is accountable for the actions of the SNA.

In Syria, given the adversarial nature of US relations with Moscow and hostility with both Damascus and Tehran, further isolating Turkey can only serve to constrain US diplomacy in Syria. None of the players in Syria are angels; far from it. Putin advances with a weak hand by talking to everyone and working through differences. There is a compelling rationale to stop the bleeding in US-Turkey ties. Better to be partners, even difficult partners, than adversaries working toward a Syrian endgame that should include support for the UN political transition, a Turkish withdrawal, vigilance and cooperation against terrorists and addressing the refugee crisis.