Amid complications with Turkey, Russia claims it stays the course in Syria. 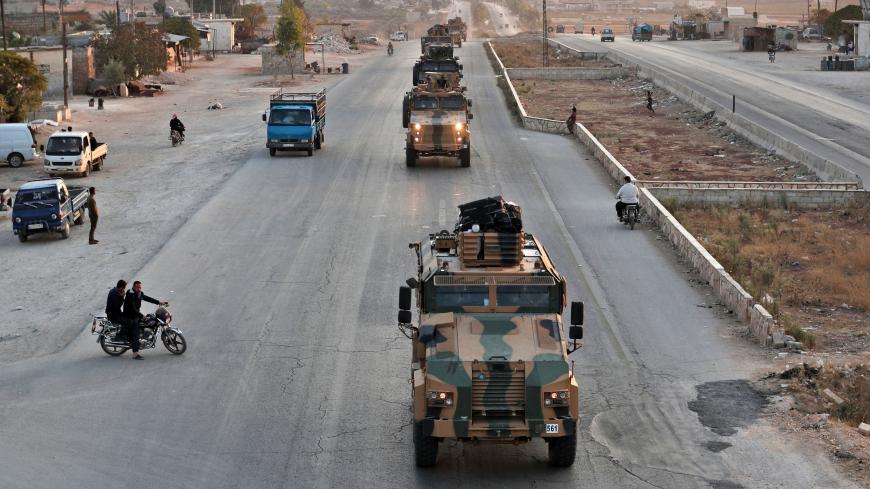 MOSCOW — Russian President Vladimir Putin and Turkish President Recep Tayyip Erdogan clinched a deal Oct. 22 on northeastern Syria to halt the Turkish offensive against the Kurdish People's Protection Units (YPG) — which Ankara deems a terrorist organization — implying their withdrawal from some areas east of the Euphrates River and from the towns of Tel Rifat and Manbij west of the river.

On Oct. 29, Moscow informed Ankara that 34,000 Kurdish militants and more than 3,200 heavy weapons were removed from a 30-kilometer-deep (19-mile-deep) strip of land in Syria on the Turkish border.

Almost a month into the agreement, Turkey is displeased with the progress on the ground and blames Russia for the failure to deliver on its own commitments. On Nov. 18, Turkey's Foreign Minister Mevlut Cavusoglu warned that Ankara may resume Operation Peace Spring in Syria should the Kurdish units remain near the Turkish-Syrian border. Reacting to the statement, Russian Foreign Minister Sergey Lavrov called Russia's belief of a potential resumption of the operation a “misunderstanding” but conceded that "there are maybe some individual areas where this matter still needs to be finished."

"The statement of the Turkish foreign minister on unleashing new hostilities can only lead to the exacerbation of the situation, not to its settlement, which [was] the aim of the memorandum of understanding between Russian and Turkish presidents,” Russian Defense Ministry spokesman Maj. Gen. Igor Konashenkov said Nov. 19.

Meanwhile, Russia’s own military police patrolling the areas under the agreement fell prey to numerous attacks from the local Kurdish population. One of the latest assaults turned out to be particularly rough, with a dozen disgruntled people throwing rocks and Molotov cocktails at a Russian armored personnel carrier.

On a different occasion, the YPG used kids to attack Russian convoys and filmed the attack allegedly for propaganda purposes.

The incidents triggered angry debates within the Russian policymaking community, particularly over two issues: whether the protesters were egged on by the Americans, who are believed to be seeking the torpedoing of Russian reconciliation efforts between Damascus and the Kurds, and if this is the case, how to respond to such provocations knowing that the use of force may undermine Russian legitimacy as a “peacekeeping” force. Moscow hawkish proposals discussed included the use by the military police — in self-defense — of ultrasonic weapons that cause severe hearing impairment.

The Russian military conveyed an array of stern warnings to the Kurdish commanders to help ensure the provocations are stopped or have the provocateurs prepared to face the consequences of attacking Russian troops.

The Kurdish security organization and primary intelligence agency Asayish recorded on Nov. 19 a video that extends an apology to the Russian troops for the attacks and promised to “take measures” to prevent future assaults. The video statement also argued the Russian troops could guarantee the safety and security of the local population as envisaged in the Sochi agreement. Russian military news outlet Vornnoe Obozrenie also reported that some of the Asayish units have already been deployed to Kobani to “provide order.”

On Nov. 21, two days after Konashenkov's announcement, Turkey’s Defense Minister Hulusi Akar said Moscow and Ankara were in talks over the need to increase patrols in the areas where Turkey believes Kurdish YPG militants are still present.

Speaking to a parliamentary commission, Akar said it was a Turkish assessment that the YPG was still present in the Manbij region, “wearing the clothes of [Syrian government] regime elements.” He said Moscow was asked to address the issue and consider increasing patrols in Tel Rifat.

Another thorny issue between Russia and Turkey that has lately escalated is the situation in Idlib.

Another Sochi deal between Putin and Erdogan signed in September 2018 was designed to settle the Idlib issue by creating a demilitarized zone between government troops and militants. The zone was supposed to be 15 to 20 kilometers (9 to 12 miles) wide, with the full withdrawal of terrorist Hayat Tahrir al-Sham units. As the fighting in Idlib has intensified over the last few weeks, Turkey seeks a permanent cease-fire as long as Syrian government troops withdraw behind the lines previously agreed upon between Ankara and Moscow.

“Despite the cease-fire introduced by the Syrian army with Russia’s support in Idlib on Aug. 31, Hayat Tahrir al-Sham terrorists continue to shell government troop positions and nearby towns. Every day, 20 to 30 such attacks by the militants are recorded. There has been an increase in the activity of the local residents in the de-escalation zone itself. They are protesting the terrorists’ stranglehold. In particular, demonstrations are being held in Saraqib, Beenish, Taftanaz, al-Kafrun and Maarat al-Numan. The terrorists are trying to stop these civic actions, disperse the crowds and put up aggressive resistance,” Russia’s Foreign Ministry spokeswoman Maria Zakharova stated.

At the time the deal on Idlib was struck, Al-Monitor cited a senior Russian diplomat who described the general principle of Russia’s engagement on Idlib as “Moscow [being] flexible on solutions but firm in its intent to settle the issue once and for all.” Russia still seems to be committed to the principle — except now Idlib-related solutions are more strongly linked to the situation in northeast Syria than before.

Amidst these developments, Russia is determined to stay the double-track course on boosting the political settlement within Syria and reintroduce the country back into the international community.

“We note that the isolated hotbeds of tension on the ground in Syria have not thwarted the successful and planned launch of the Syrian Constitutional Committee in Geneva. … This commission is drafting proposals for the constitutional reform of Syria. The next session is scheduled for the last week of November,” Zakharova explained.

“In addition, we noted the Council of the Union of Arab Chambers of Commerce decision to hold its 132nd session scheduled for 2020 in Damascus. We welcome the gradual restoration of Syria’s relations with the Arab world, and we support the return of Damascus to the League of Arab States. We believe this will be beneficial for Arab unity and the strengthening of regional security and stability,” Zakharova said.