Veteran Middle Eastern hip-hop artist Malikah's new release at the height of the Lebanese protests marks a shift in her music and views on Lebanon. 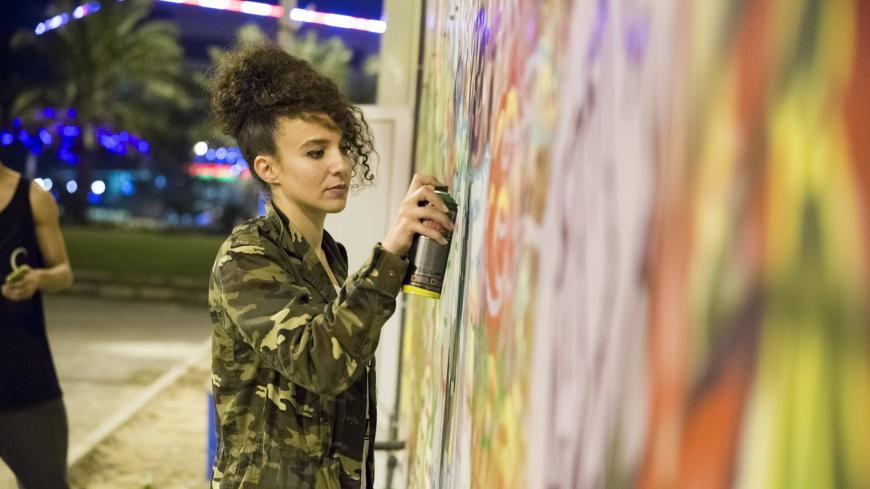 BEIRUT — “I have gotten more laid back over time," admits Lebanese hip-hop artist Lynn Fattouh. "This was because of a growing sense of losing hope and losing faith in finding a solution [for my country]." But then she added, "What happened with the revolution is it brought this [anger back] because what I saw was hope."

On Oct. 24, a week after the protests started in Lebanon, Fattouh, known by her stage name Malikah (Queen in Arabic), released a song called “I’m Fighting.”

“I wrote it two-three years ago, but I thought it wasn't the right time to release it, so I never did. But with what is happening now, I had to,” she told Al-Monitor.

Protests erupted across Lebanon Oct. 17, following a rise in taxes and devastating forest fires that swept the nation the previous week. The protests gained momentum with the political system itself a target. Within a month, Prime Minister Saad Hariri stepped down and the Cabinet was dissolved.

"I'm Fighting," a two-minute song, makes room for a myriad of social, political and economic issues tackled in Malikah’s lyrics, with denunciations of sectarianism followed quickly by criticism of Orientalism and proceeded by a call for female empowerment.

"I did not think about whether I want to fit all these topics in the song. I just wanted to write about what I am fighting for or against every day and these [issues] automatically came up," she said.

Among other topics Malikah addressed was the warped image of Lebanon for many people. "You know, the Lebanese people, we are so good at marketing that we even market to ourselves. We portray this image that we are the coolest, we have the best parties … we are the most liberated, we can say whatever we want,” she said. "This stereotype is not negative; in fact, I wish it was true and that we were free. In reality, we are living like dogs; we don't have water, we don't have electricity.”

Malikah is not alone in releasing music on the uprising. Local rappers such as El Rass and AlDarwish have both released pieces in the days following the protests, all of which were shared widely and played in the streets of Beirut.

“Rap is revolutionary music. It has a culture of standing up to the oppressors and representing knowledge, power and community. It is the music that stands against the status quo and now all Lebanese people feel that,” Malikah noted.

Born to a Lebanese father and Algerian mother, Malikah, now in her 30s, began rapping at the age of 15 and has performed at Glastonbury, toured with Gorillaz and Blur lead Damon Albarn and opened for Snoop Dogg. She is now one of the longest working and most well-known rappers in the region.

During her career, Malikah has incorporated sociopolitical themes in her music. Her first song, “Ya Lubnan,” released in 2006 following the July war, was "about what was going on, but mostly [aimed] to talk to the Lebanese people to give them hope."

It was also when Fattouh began rapping in Arabic, and the name "Malikah" was born. “Initially I made fun of people who rapped in Arabic. I said it wasn’t a language for hip-hop. … This was an inferiority complex. Because we were colonized, we always think French or English is better.”

But "Ya Lubnan" changed that. “I started writing it in English, but then it hit me. … Why would I speak English to my own people.”

This song also came out at a time when Arab rap and hip-hop were on the rise with the internet connecting musicians across the region and making it vastly easier to produce and disperse work.

The 2011 Arab uprising saw another peak in interest in Arab rappers, Malikah explained. “Rappers speak on behalf of the people so they are a credible and genuine source of information," she said.

She noted that rappers have a big role to play in protests and revolutions. "This is when we know people are listening to us and need us. … We need to be very careful about what we say because if we say something wrong, we are leading the listeners on the wrong path," she added.

Malikah avoided making music explicitly about the 2011 Arab uprisings, as she was not confident in capturing or understanding the entire picture of the events at the time.

But this was not the case in the recent protests, despite a radical change in her views over the past month.

In 2018, Malikah released a song titled “Sma3,” dedicated to her fictional younger brother. The work advises the next generation on the issues they will face in Lebanon. The song came out only months before the 2018 elections, which despite the new electoral law and independent parties did little to change the political system.

“In a nutshell, when I first started as Malikah I was super patriotic and loved Lebanon and being an Arab,” she explained. “But when I released 'Sma3' I went into a state of depression. I think all Lebanese people, in general, went through the depression I went through. We all lost faith and stopped seeing the light at the end of the tunnel. It has been way too long that things have not changed. … So when we saw this [the protests] it brought back some idea of hope."

Now the slow melodies and dark tone of “Sma3” has been replaced by the fast-paced and active “I’m Fighting.”

“When the revolution happened, to say it was a dream would be an understatement. It seemed so far away that people would stand up and I had such a large mix of feelings, but words could not express how touched I was. … If I didn't release the song, I would not be able to forgive myself for not standing with the Lebanese people," she concluded.