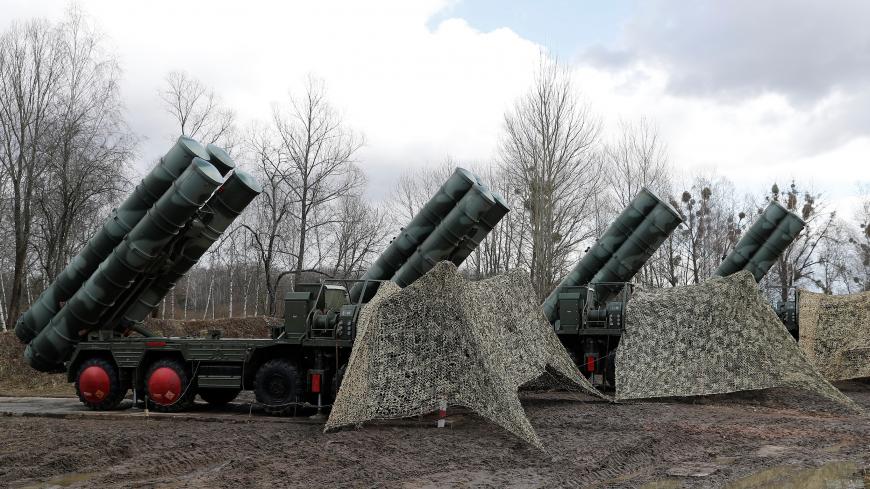 A view shows a new S-400 Triumph surface-to-air missile system after its deployment at a military base outside the town of Gvardeysk near Kaliningrad, Russia, March 11, 2019. Picture taken March 11, 2019. - REUTERS/Vitaly Neva

Secretary of State Mike Pompeo had previously warned Turkey that activating the S-400 missile system and making it “operational” would result in US sanctions. But after Ankara activated the system’s powerful radar system for tests this week, Pompeo appeared to move the goalposts further back amid Trump’s reluctance to sanction the NATO ally.

“We are still talking to the Turks; we are still trying to figure out our way through this thing,” Pompeo told reporters at a press briefing Nov. 26. “I don’t want to get ahead of what the president may or may not do, but we have made clear to the Turkish government our desire to see them move away from putting into full operationalization the S-400 weapon system.”

The latest emphasis on “full operationalization” — instead of activation — could give Trump more wiggle room to avoid implementing sanctions required under a 2017 law barring other countries from making “significant transactions” with Russia’s defense sector. But it could also give Turkey license to continue testing the Russian-made radar system, which Washington fears could be used to spy on US military hardware.

The tests have also prompted lawmakers — including some of Trump’s closest Republican allies — to double down on their calls for the president to implement the sanctions.

“I commend the administration for its efforts to dissuade Turkey from purchasing the S-400,” Senate Armed Services Committee Chairman James Inhofe, R-Okla., told Al-Monitor after Pompeo’s remarks. “But once again, Turkey has made it clear it’s not turning back. It’s time for the administration to make a determination that the S-400 is a significant transaction and impose sanctions required by law,” Inhofe added,

Turkey has already paid Russia for a significant portion of the multibillion-dollar missile system.

Under the 2017 law, the Trump administration must choose five options from a menu of 12 sanctions to place on Turkey. These range in severity and include cutting Turkey off from US loans and international lending streams, shutting Ankara out of transactions on foreign exchanges, sanctions on Turkish banks, businesses and executives, and property and investment bans.

After Turkey imported the S-400 system in July, 45 Republican senators took the unusual step of meeting with Trump at the White House to urge him to implement the sanctions. But the president showed little interest in doing so.

Turkish President Recep Tayyip Erdogan has relied on Trump as a bulwark against the mounting efforts in Congress to punish Ankara for the S-400 purchase and its recent incursion into northeast Syria to fight the Kurdish People’s Protection Units. Still, the S-400 tests could increase the odds of Congress passing a veto-proof Turkey sanctions package.

After meeting with Trump and the Turkish president during his visit to Washington earlier this month, Senate Foreign Relations Committee James Risch, R-Idaho, threatened to “move forward” with his stringent Turkey sanctions bill if Erdogan remains “firm in his position on keeping the S-400s.”

The House passed its own Turkey sanctions package 403-16 last month, but Senate Majority Leader Mitch McConnell, R-Ky., has not put it on the Senate floor, arguing the bill is overly broad and unlikely to alter Ankara’s behavior.