Palestinian President Mahmoud Abbas has finally given his consent for Qatar to pay to extend an Israeli gas pipeline to the Gaza Strip's power station — a project that's expected to ameliorate the electricity crisis there while boosting Qatari influence in Gaza and giving Hamas standing as a successful mediator. 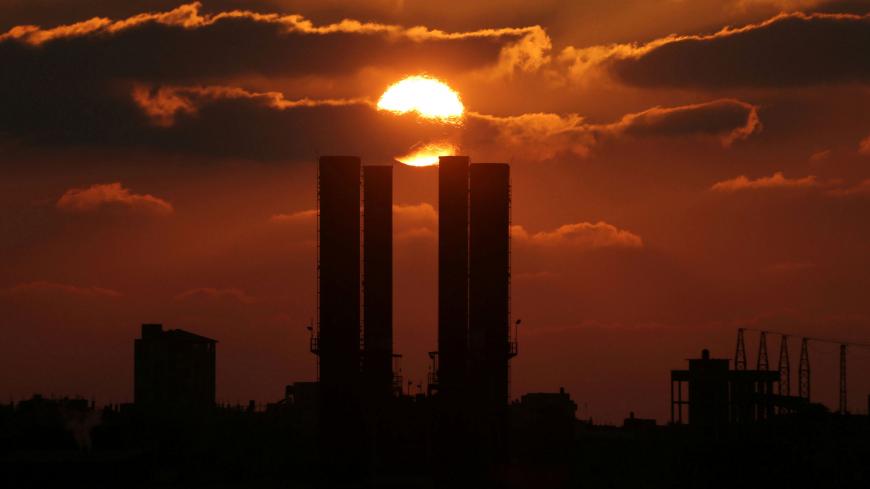 Mohammed Abu Jayab, economist and editor of economic newspaper Al-Eqtesadia in Gaza, told Al-Monitor that Qatar has agreed with the PA and Israel to secure the necessary funds for the project. “This includes construction of a 40-kilometer-long [25-mile-long] gas pipeline route and three pumping stations along the eastern border of the Gaza Strip." The $88 million project will take 18 to 24 months to complete, he said, adding, "Implementation will start in early 2020."

Abu Jayab first revealed the deal on his Facebook blog, based on information from his sources in the Palestinian presidency. This PA-Qatar agreement took place during an Oct. 30 meeting between Palestinian President Mahmoud Abbas and Qatari Ambassador Mohammed al-Emadi in Ramallah, who is also chairman of the Gaza Reconstruction Committee, Abu Jayab said.

It should be noted that Qatar first proposed this project in 2015, and several meetings on the topic have been held since then. It is now being discussed again in the wake of humanitarian understandings reached in October 2018 with the help of Egypt and Qatar. Those understandings were reached after the return marches on Gaza borders were launched in March 2018.

Power cuts are among the most serious problems in the besieged enclave. The electricity crisis has remained unsolved for 13 years now. In mid-2006, Israel bombed Gaza's only power plant in response to Hamas' abduction of Israeli Col. Gilad Shalit that June. Since then, Gaza has suffered an acute power shortage, with electricity supplied, at best, only eight irregular hours per day.

Although a year has passed since Hamas and Israel reached the humanitarian understandings, the PA has been reluctant to approve it. Now, however, Qatar has the PA’s approval and Doha has pledged to bear all financial costs.

Abu Jayab discussed what the PA has to gain by going along with the proposal.

“It doesn't seem that the PA would financially benefit from this project. Rather, the PA sees it as a political gain through which it would wrest control over the Gaza Strip, which has been ruled by Hamas since 2007,” Abu Jayab said, based on information he received from Palestinian presidential sources. He added that Israel required Qatar to get the PA's approval. “Israel doesn't recognize Hamas' control of Gaza. Thanks to the close personal ties between Emadi and Abbas, the PA’s approval was secured,” Abu Jayab said.

An electrical engineer with the Palestinian Energy and Natural Resources Authority spoke to Al-Monitor on condition of anonymity. “The Qatari project is strategic. We have always encouraged it, and we have been waiting for the approval of the Palestinian leadership on it. This project will gradually solve the power outage crisis. It will shrink the price of producing 1 kilowatt of electricity from 1 shekel [29 US cents] to 40 agora.” (One shekel equals 100 agora.)

Gaza Electricity Distribution Corporation public relations director Mohammed Thabet also praised the proposal's environmental and humanitarian benefits. “The project will increase the electricity-supply hours to the Gaza Strip up to 12 hours per day. The use of gas to run the plant instead of diesel will reflect positively on the environment. We will be able to run the four generators at the plant simultaneously," he told Al-Monitor.

There are some doubts about the project, however.

Head of the Economic Committee of the Hamas Legislative Council Atef Afwan told Al-Monitor, “The operation of the power plant will raise efficiency and generate more production, but the problem is the Israeli commitment to implement the project. We don't trust Israeli promises.”

He said the project's approval is in part a result of the return marches launched in 2018. “This stems from Israel’s fear of the explosion of the situation in Gaza,” Afwan said.

He noted, though, “Should Qatar succeed in implementing this project, our relationship with it will grow stronger. Doha often hosts Hamas leadership figures and supports the Palestinians, who owe it respect. Qatar has been gaining influence in Palestine.”

Between 2012 and 2018, Qatar donated more than $1.1 billion worth of grants and projects to the Gaza Strip.

“The project embodies Palestinians' dependence on Israel. The operation of the power plant with Israeli gas keeps Gaza at the mercy of Israel," he told Al-Monitor.

He explained that Israel could ensure smooth gas flow to the Gaza power plant at its discretion and halt it in the event of any security tension. Meanwhile, he noted, “The PA’s ongoing endeavors to achieve disengagement from the Israeli economy render this project futile."