Protests bring people from all classes to posh Beirut Downtown

Since protests broke out across the country, people from all social classes have gathered in downtown Beirut, which previously had become the domain of the city's upper crust. 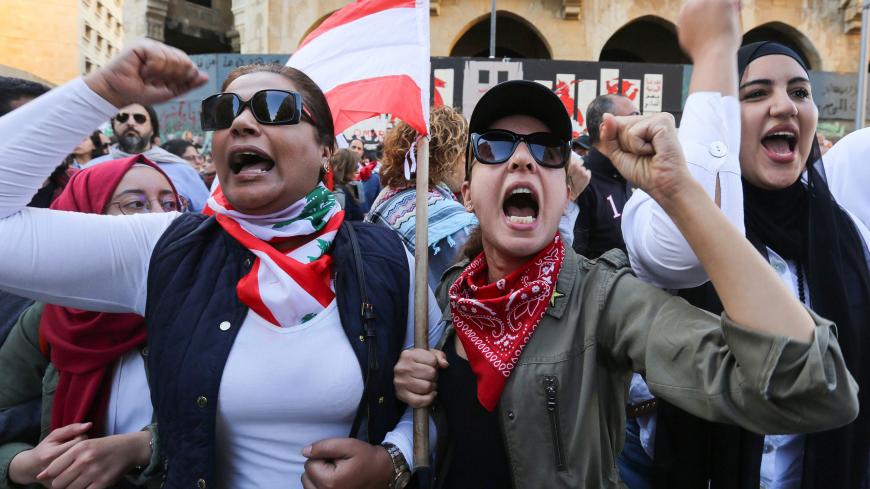 BEIRUT— The protests that sprouted Oct. 17 demanding social and economic reforms brought together people across political, factional and regional lines in Lebanese cities from north to south. In downtown Beirut, this movement and melding of interests has altered the demographic landscape of Martyrs’ Square and Riad al-Solh Square, two of the city's best-known landmarks. Once considered the preserve of the city's elite, these days Lebanese of all social classes are appropriating these public spaces.

Among the protesters and others gathering in the prominent squares of the Lebanese capital, the street hawkers are a remarkable sight. Carrying coffee cups, water bottles and cotton candy, they wander amid the myriad demonstrators, selling their libations and eats. Some of them push stalls and carts hawking kaak (hardened bread) from Tripoli, fava beans, grilled corn on the cob, shawarma sandwiches, juices and Lebanese flags.

Hussein Saqr has set up a corn and fava bean stall at an entrance leading to Riad al-Solh, named after Lebanon’s first post-independence prime minister, a statue of whom stands at the center of the square. This location is also the home of the Grand Serail, the headquarters of the prime minister.

Saqr told Al-Monitor, “I live in Khalde, in south Beirut, and I have been coming here daily since the revolution began. I was a butcher before, but I stopped that. I bought this stall and thought it would be better to sell here rather than stay at home. I am happy to be making some money.”

“I never thought I would be allowed to sell items in this area, which is forbidden to us [street vendors],” Saqr continued. “Each day, I park my stall somewhere close, and I return the next day with fava beans and corn to sell to the protesters. When the revolution is over, I will certainly be unemployed again because the government does not allow us to sell on the streets of Beirut.”

Another merchant, who spoke to Al-Monitor on the condition of anonymity, said that he has been coming to the square every night since the protests began. During the day in the Cola area of southern Beirut, he sells kaak from Tripoli, but in the evening, he capitalizes on the crowds filling the squares in the downtown district to sell kaak for the standard 2,000 Lebanese pounds ($1.32) a piece.

Many of the young men and women protesting Lebanon's economic crisis and elite and government corruption have rejoiced at the Beirut they are witnessing and experiencing in the city's major squares.

“What we are seeing in both squares is beautiful,” said Nadine Moawad, who has been protesting daily. “This is how things should always be. This is the first time I feel Beirut is truly my capital city, as a Lebanese woman. Today, Beirut resembles us. We hope that through the revolution, we will be able to get back this property and turn it into public space for discussions and gatherings without security constraints or physical appearance concerns or class-based distinctions.”

“How did they decide to construct fancy buildings on this public property?” Moawad asked. “Today, I bought a saj mankoushe [bread topped with zaatar or cheese] and a cup of tea for 3,000 Lebanese pounds [around $2], which is cheap, compared to the prices of the restaurants and cafes here. I wear whatever I want daily, and I no longer have to be all spruced up to fit in.”

Many young protesters think like Moawad. “Some people never thought they could party in downtown Beirut and eat at the lowest prices,” Rim Kanso told Al-Monitor. “Even during public holidays and occasions, squares do not fill up with such a large number of people, especially the poor.”

Jawad Badr al-Din remarked, “The scene is lovely, and the presence of street hawkers aligns with the goals of the revolution to defend the poor. But, in some cases, there are too many stalls, and the revolution has turned more into a carnival. However, the presence of hawkers is not a mistake, but a necessity, because they provide protesters with food at cheap prices.”

Another demonstrator noted, “Hawkers selling their products near elegant restaurants attracts all social classes and foreigners visiting Beirut, turning the city into a place for the rich and the poor.”

The generation from before the civil war (1975-1990) remembers a downtown Beirut different from the one today. Before the war, people of all classes would go there for the covered markets selling fruits and vegetables, jewelry, silk and other products. Postwar reconstruction brought new architecture and new businesses, in particular upscale shops selling international brands, thus altering the demographics of the district in favor of the well-to-do. Some of the markets, however, still carry the names of the markets from the old Beirut.

Before the war, Riad al-Solh was known as Sahat Assour and has undergone numerous transformations since its creation in the late 1880s, including being named after Solh in 1957. Martyrs' Square had once been the commercial hub of Beirut, and during the civil war, it served as a demarcation line between the warring sides. A large part of it was destroyed in the conflict. After its restoration postwar, it became the gathering point for mass demonstrations, most notably in 2005, when the Cedar Revolution led to the withdrawal of Syrian forces from Lebanon.

A man who introduced himself as Abu Mohamad al-Beiruti told Al-Monitor, “The old markets were pretty, popular and open to everyone from all sects and social classes [before the war]. Life was nicer, and the protests revived this feeling.”

Abir Saksouk, an architect and an activist involved in urban issues, remarked, “The scene in downtown Beirut changed historically. It has been destroyed and rebuilt several times since the 1920s — under the French occupation [mandate], which damaged parts of the old public fabric dating back to Ottoman days — until the old downtown Beirut was totally effaced.”

Saksouk further explained, “After the civil war ended, the Solidere company was commissioned to build downtown in the 1990s according to different standards. The company destroyed downtown completely and erected modern buildings. Some people tried to resist this change for reasons related to heritage, way of life and the economy. Still, change was enforced violently and blatantly.”

To Saksouk, the current scene is “lovely” on Riad al-Solh and Martyrs’ Square, which commemorates 14 people executed by the Ottoman state during World War I.

“People feel the city is theirs and that they've reclaimed its open spaces and reconnected with them,” Saksouk said. “They are taking care to maintain the area’s cleanliness and graffiting the walls. Although the area has been encircled with metal barriers, merchants are providing for protesters in the two squares, where discussions and gatherings are being held about keeping the spaces open, even if the revolution is silenced. This in itself is a victory.”

Suhail Mnaimne is the president of the Beirut Heritage, an association focused on documenting, preserving and reviving Beirut’s heritage.

“Downtown Beirut was modernized after the civil war to cater to the bourgeoisie until it no longer represented a large group of Lebanese,” Mnaimne said. “The association has tried to call for the restoration of downtown Beirut, especially the markets, but its demands have fallen on deaf ears. Solidere and the capital controlling the country are benefitting from this reality and refuse to change it.”

As for the current situation, Mnaimne remarked, “I think the revolution has given the two squares a new image, but it is temporary and will disappear as soon as the protests end if no laws enshrining this change are issued.”