Through Fatima's eyes: Jordanians take to streets against domestic violence

The blinding of Fatima, a mother of three, by her abusive husband has disgusted and outraged Jordanians because of the lack of protection available for women experiencing domestic violence. 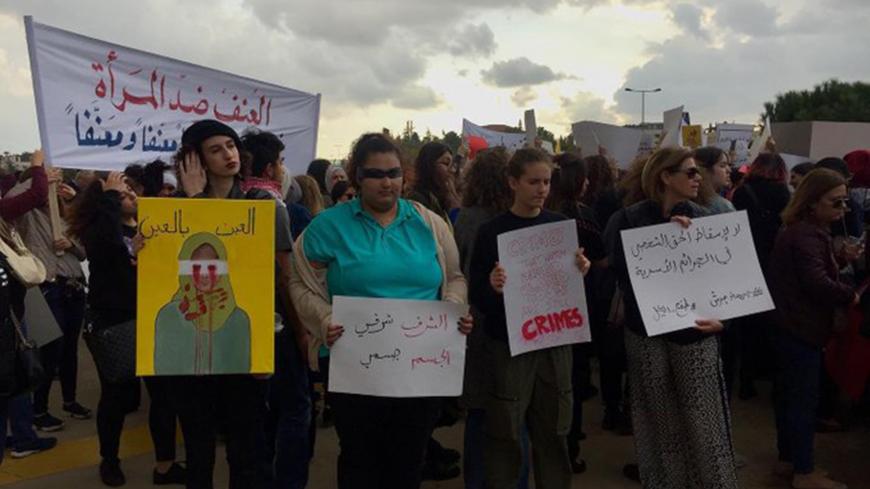 AMMAN — “For God’s sake spare my other eye, so that I can see and serve my children,” Fatima begged her husband after he had already gouged one of her eyes. Fatima's plea fell on deaf ears. Her husband completely blinded her with his bare hands.

Nadine Nimri, human rights correspondent for the daily Al-Ghad, reported on Fatima's horrific experience of domestic violence, which took place in Jerash, 37 miles north of Amman. Nimri recounted some of the details to Al-Monitor, noting that Fatima had tried to protect her face to prevent her husband from pushing his finger into her eye. Fatima at one point pleaded with him that if he loved his daughter, he would leave her a mother with sight in at least one eye.

In the end, the only mercy Fatima received from her husband, who beat her repeatedly over 13 years of marriage, was not to blind her in front of their children — two boys, ages 9 and 11, and a daughter, aged 2 — or to harm them, although he threatened to kill them if she tried to run away or otherwise seek protection. The prosecutor for the Jerash Criminal Court charged Fatima's husband with inflicting permanent disability and detained him pending trial. If convicted on that charge, he could serve up to 15 years in prison. On Nov. 16, the prosecutor included an additional charge of attempted murder.

Two weeks have passed since Fatima's story became news on Nov. 9, but Jordanians’ rage and disgust linger over the brutality of the violence against her and the state's inability or unwillingness to protect women trapped in situations of domestic abuse. The story has served as a wake-up call to the inadequacy of the mechanisms for reporting domestic violence in Jordan, and it prompted women as well as men to take to the streets on Nov. 16 to express their anger at laws that allow men to get away with brutalizing women.

As part of the protest, women staged a sit-in near the Prime Ministry in downtown Amman, adopting the slogan and hashtag Enough and denouncing the institutional framework and the mentality that encourages violence and discrimination against women. The demonstrators chanted, “We are here for Fatima’s eyes!”

In another expression of solidarity with Fatima, Rawan Jayousi, a women’s rights activist, wore a black blindfold at the ministry protest. “We share the pain and the silent suffering of Fatima and all women facing domestic abuse,” Jayousi told Al-Monitor. “We are here to say that it is time to deal with the issue of women’s rights and gender equality in a serious and strategic manner at all levels — legislative, social and humanistic. Women’s voices should be heard. Women are entitled to education, they have the right to work and be protected from violence, harassment and discrimination.”

Standing with Jayousi, fellow protesters chanted, “My voice is loud, my voice is free!” “Violence will not be tolerated!” “Safety and freedom for Arab women!” “No to domestic violence — We want to change the law to safeguard women’s rights.”

Salma al-Nims, secretary-general of the Jordanian National Commission for Women, told Al-Monitor that the goal of the sit-in was to tell the government that women are fed up with half-measures that have done nothing to combat domestic violence.

Nims pointed out that even if abused women file charges against their husbands, they often later drop them, mostly because of pressure from family and friends to do so. This mentality, she noted, urges women to simply put up with domestic violence, but this must be changed, through education, social mechanisms, laws and practical measures that protect women.

There are no accurate official figures on abused women in Jordan. Married women and their families tend to refrain from reporting abuse to the Family Protection Department for fear of public exposure or scandal. This was the case with Fatima, who suffered years of abuse while her family tried to conceal what was happening to her.

Nimri asserted, “Fatima's case reveals poor reporting in cases of violence against women, whether verbal, psychological or physical violence, but we are governed by customs and tradition.” Of relevance here, societal custom dictates keeping households intact, which discourages or prevents women and their relatives from speaking out about domestic abuse and violence.

“We need to create more awareness about the Law on Protection from Domestic Violence,” Nimri concluded. Activists and civil society organizations have criticized Jordanian legislation on family protection, including the Law on Protection from Domestic Violence, on the grounds that it restricts the definition of abuse to crimes punishable under the Penal Code. In this respect, it fails to address women being deprived of their freedom and control in decision-making as well as being subjected to economic or verbal violence.