Hamas leader Yahya Sinwar's recent belligerent and threatening speech reflects frustration over the stalemate in talks with Israel, partly due to the Israeli political crisis. 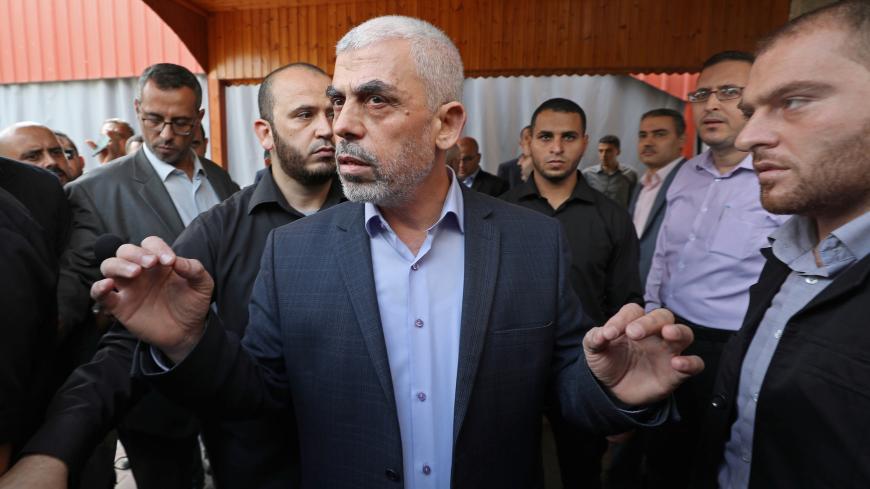 Hamas leader Yahya Sinwar’s Nov. 4 speech in Gaza raised red flags in Israel’s defense system. It was Sinwar's most militant speech in Gaza since the 2014 Operation Protective Edge. “We’ve had enough of this,” he yelled. “Prepare for something big.”

According to Sinwar, his organization has succeeded in digging tunnels several kilometers in length that will be able to stand up to a ground operation involving Israeli tanks. Sinwar also bragged that his organization has access to tens of thousands of rockets that can be fired at Tel Aviv for six months on end and leave the smaller localities in Israel “ghost towns.” He complained that the negotiations with Israel are stuck and that Hamas’ patience is running out. He emphasized, “What we cannot achieve with words, we will achieve with the language of the gun and Allah’s help.”

This past weekend, Hamas shot volleys of rocket fire on Israel, and Blue and White leader Benny Gantz said that if the rockets will continue, Israel should renew its policy of killing of individual enemies.

“We will make you curse the day you were born,” Sinwar threatened in response.

Sinwar spent 22 years in the Israeli prison system: he was sentenced to five life sentences, but was released in the 2011 Shalit deal. Thus, the leader is well aware of Israel’s abilities and powers. His threat — six months of war — would mean a fatal blow to the Gaza Strip and the total collapse of the Hamas movement. He understands this, as do Hamas’ military leaders Mohammed al-Deif and his deputy Marwan Issa, which is why most of the movement’s leadership wants to promote the arrangement with Israel, except for certain pockets of resistance (called “rebels” or “rogue groups’’) in the Strip. The leadership realizes that there is no other way to alleviate the terrible distress of the Gaza population. “Guns and fire,” as Sinwar threatened, would lead to loss of control.

Nevertheless, Israel’s defense system takes Sinwar’s threats seriously. More than ever before, today’s Hamas movement faces growing agitation and unrest among its two million Gazan residents. Many of them are now directing their fury at Hamas and its leaders as the ones responsible for inflicting terrible suffering on them.

A protest erupted at the beginning of the week in Khan Yunis, unprecedented in its intensity and anger against Hamas. It began with a funeral, that of Anan Abu Jameh, who according to his family was killed by Hamas police who came to arrest him and threw him from a high window Nov. 1. Abu Jameh was critically wounded and died soon after. The demonstration following his death showed the fury that had accumulated within the residents over a long time period. “Hamas murderers,” the demonstrators shouted, “Enough of your exploitation, we’re sick of it!” They carried the body of the young man, raised dozens of fists to the heavens and shouted curses like “Hamas Shi’ites.” That one was especially worrisome to Hamas, accusing the movement of not being real Sunnis, but Shi’ite traitors to their religion. As far as Hamas is concerned, it was the worst kind of curse. The very fact that dozens of youths dared to protest and curse Hamas publicly was a red flag. Perhaps Sinwar’s words resonated with the youths: “We have had enough of this!”

The incitement against Hamas is not only in Khan Yunis, but has spread to the entire Strip. According to the Palestinian Central Bureau of Statistics, the unemployment rate in Gaza was 52% in 2018. This number is expected to grow even higher in 2019. Many youths complete their studies in the universities and have zero chance of finding work, while they see how Hamas activists take very good care of themselves and their relatives. In the eyes of the unemployed youths, Hamas is a corrupt movement.

When hopelessness prevails, the hawks in Hamas have the upper hand and threaten the status of the pragmatists, headed by Sinwar, who supports and leads an arrangement with Israel. The problem is that it is not advancing at his desired pace. Sinwar relied on the Egyptians, who promised him that if he took the moderate path, an arrangement with Israel would be crafted in the near future and the closure would be eased. But after that promise, Israel became embroiled in an extended political crisis that inhibits decision-making — not only with regard the sensitive and loaded issue of an arrangement with Hamas, but on any subject.

In threatening Israel so specifically, the Hamas Gaza leader showed that he keeps close tabs on Israel’s political issues and is regularly updated on the governmental crisis. “They don’t even have a government that can approve a budget; they don’t have a limited cabinet that can discuss defense issues such as the Iranian threat,” he sneered.

A security source told Al-Monitor on condition of anonymity, “No one could claim that he was not warned, but Israel can’t make decisions now: not with regard to Gaza, not regarding an arrangement and significant easements to the Strip and also not regarding a serious military operation.”

Despite the opposition of the hawks in the Hamas movement who criticized him over a possible arrangement with Israel, Sinwar well understands the dangers involved in war and thus gave the green light to advance the arrangement. Now everything is falling apart. Those who opposed his pragmatism are strengthening and he is forced to face desperate youths and brag that the organization can embroil Israel in war for at least six months. None of those present dared to ask him: Have you considered taking some of Hamas' astronomical investments in beefing up the military and investing it in the welfare of the Gaza residents?

Ever since the 2007 coup, the Hamas leadership has assumed that the Palestinian Authority would continue to underwrite the civil institutions while Hamas would continue to invest its resources in developing rockets and building tunnels. None of Hamas' leaders have come to terms with their error, not even as protests in Gaza gain momentum. Instead, Hamas feels that its only possible solution is another round of fighting with Israel — no matter the price.