A stable Jordan may be a top Israeli national interest, but important joint economic projects between the two countries have been mired in bureaucratic red tape for a while. 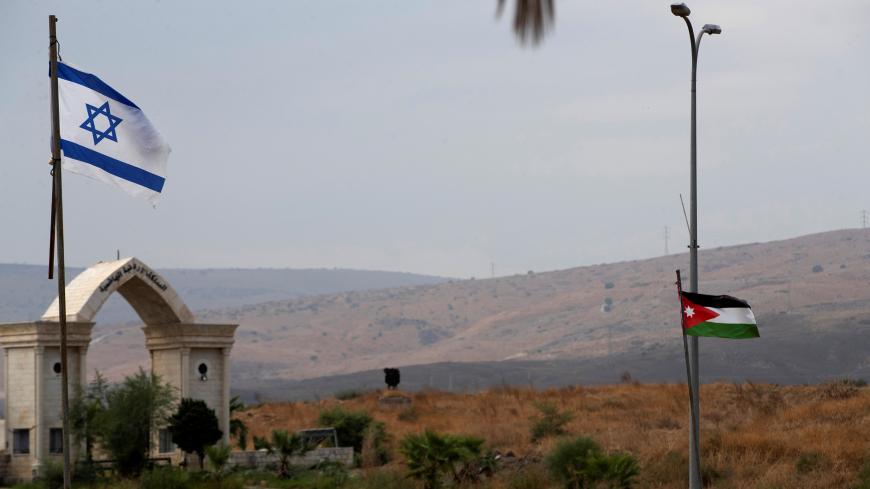 The national flags of Jordan and Israel are seen from the Israeli side of the border area between Israel and Jordan, Oct. 29, 2019. - REUTERS/Ronen Zvulun

There were no celebrations or even ceremonies to mark the 25th anniversary of Israel’s peace agreement with Jordan. If anything, mentions of it tended to be negative. According to a report by Ksenia Svetlova for Al-Monitor, King Abdullah refuses to meet with Prime Minister Benjamin Netanyahu. Meanwhile, Jordan rejected Israel’s request to extend the period during which Israeli farmers can continue to work their fields in the Tzohar and Naharayim enclaves now that the Israeli lease has expired. Instead, Jordan offered financial restitution for any crops left in the fields.

Jordanian Foreign Minister Ayman Safadi met about this issue with Israel’s national security adviser, Meir Ben Shabbat. Though he praised the security relationship between the two countries, he said, among other things, that delays in joint economic initiatives are harming relations between Israel and Jordan, mentioning the Sea-to-Sea or Red Sea-Dead Sea Canal project specifically.

Israel is constantly looking eastward to the Hashemite Kingdom of Jordan. It serves as a barrier between Israel and Iraq, a nation in turmoil with real Iranian influence on its beleaguered government. Then beyond Iraq is Iran itself, a regional power that poses a threat to Israel. Two government ministers who spoke with Al-Monitor said that a stable Jordan is a top Israeli national interest and that Israel should take steps to ensure that the country does not fall to Islamist forces, since they would likely turn Israel’s eastern border into a hostile front.

Unfortunately, this sense of urgency isn’t felt at all on the economic level. For Israel, trade relations with Jordan are relatively minor, amounting to just one-third of a percent of all of Israel’s overseas trade (about 2 billion shekels in 2018, about $570 million). As for Jordan, exports to Israel make up about 4% of the country’s total exports per year.

In a conversation with Al-Monitor, one senior Jordanian official involved with various aspects of his country’s relationship with Israel was highly critical of what he claimed was Israel’s failure to move ahead with major economic initiatives. As he explained it, large projects are bogged down because of Israel’s current political crisis.

“Israel has been postponing and deferring the Sea-to-Sea Canal project, which is the most important project to us, and in so doing, they seem to be showing us that they don’t consider relations with Jordan to be that important,” he said on condition of anonymity. The source noted that the government in Amman is under tremendous pressure, much of it economic. Syrian refugees are taking their toll on the Jordanian economy and the government is having a hard time implementing necessary reforms. “A huge initiative like the Sea-to-Sea Canal along with an initiative like the Jordan Gateway industrial zone could help a lot, but Israel is holding everything up with all sorts of bureaucratic excuses, then blaming the transition government for all the delays.”

The fact is that for the past year at least, development of these two initiatives have been put on hold because of the political imbroglio in Israel. Minister of Regional Cooperation Tzachi Hanegbi approached Attorney General Avichai Mandelblit with a request that he allow a discussion and vote by the Cabinet to move ahead with them, but he was turned down. Hanegbi later told Al-Monitor that the issue was already approved by the government in principal and “There can be no doubt that the government supports moving ahead with it.” Nevertheless, Mandelblit refuses to approve it.

The Sea-to-Sea Canal is intended to transport water from the Red Sea to the Dead Sea to prevent the latter from drying up. Water treatment and desalination plants along the route would provide fresh water to all of southern Jordan, Israel’s eastern Negev and even the Gaza Strip. The initial agreement to dig the canal was signed in 2013, with a practical agreement signed two years later. But the initiative is stuck, mainly because of Israeli bureaucracy and opposition from civil organizations in Israel like the Water Authority. In contrast, the defense establishment supports the initiative, as for it Israel’s relationship with Jordan is immensely important. So do Hanegbi and his ministry. But while they have managed to make some progress, the project remains stuck because of Israel’s chaotic government situation.

The Sea-to-Sea Canal is not the only collaborative economic project between Israel and Jordan. The two countries have discussed a joint airport to serve Eilat and Aqaba as part of a far-reaching tourism initiative, but that initiative was eventually cancelled, mainly due to opposition by Israel’s defense establishment over security concerns. Instead, Israel built the Ramon Airport on its own.

The Jordan Gateway is a joint industrial zone planned near Kibbutz Tirat Tzvi in the Jordan Valley, envisioned to become a free trade zone. The half planned for the Jordanian side of the border will have factories that will employ about 10,000 workers, while the half on the Israeli side will focus mainly on administration and services for the region. A bridge across the Jordan River connecting them has just been completed and the site was designated extra-territorial, so no passports will be required to enter the area. Products produced there could be designated in three ways: “Made in Israel,” “Made in Jordan” and “Made in Jordan Gateway,” allowing them to get around various boycotts and restrictions and enabling trade with countries that have no formal relations with one party or another.

Some factories are already operating on the Jordanian side of the border, most of them owned by the Rappaport family of Switzerland. On the other hand, the full implementation of the free trade zone has been stuck waiting for the completion of an access road on the Israeli side, as completion of the road would require an official government decision. A transition government is not authorized to make it, and Hanegbi's appeals to the attorney general were rejected. Now the Jordanians want to increase exports to the Palestinian Authority beyond what is allowed in the 1994 Paris Protocol, but the approval of goods is similarly stuck for bureaucratic reasons.

Natural gas is one area in which relations between the two countries are actually improving, despite internal opposition in Jordan. In 2016, Israel’s Leviathan Consortium and Jordan’s electric company signed a second contract valued at 10 billion shekels ($286 million) over 15 years. According to this new contract, the Leviathan natural gas field will supply Jordan with 40% of its total energy.

Farmers on both sides have also developed interesting relations. Farmers from the Jordan Valley in Israel have hosted their Jordanian colleagues for joint conferences on growing crops, pest control, irrigation and more. A joint campaign against rabies unfortunately came to a halt in 2017 following the deterioration in diplomatic ties, leading to a sharp increase in the number of people exposed to rabies. One Jordanian girl died after she was bitten by a wild dog. Head of the Local Council of Jordan Valley Idan Grinbaum says that the farmers have good and tight relations with their Jordanian neighbors and he is sure that after the media commotion over recent developments dies down, relations will continue to develop and tighten.

These more optimistic developments may well pave the way to advancing cooperation in other areas. If a new government is formed in Israel soon, this strategic interest will certainly be high on its list of its priorities, and not just for security considerations, but also to show the people of Jordan that peace really is worth their while. For that purpose alone, it can only be hoped that the government will do what is necessary to expedite these economic initiatives.