Israeli farmers will soon be forced to abandon their agricultural lands at Naharayim, in Jordanian territory, at the end of their 25-year leases this month according to a provision of the peace treaty between Jordan and Israel. 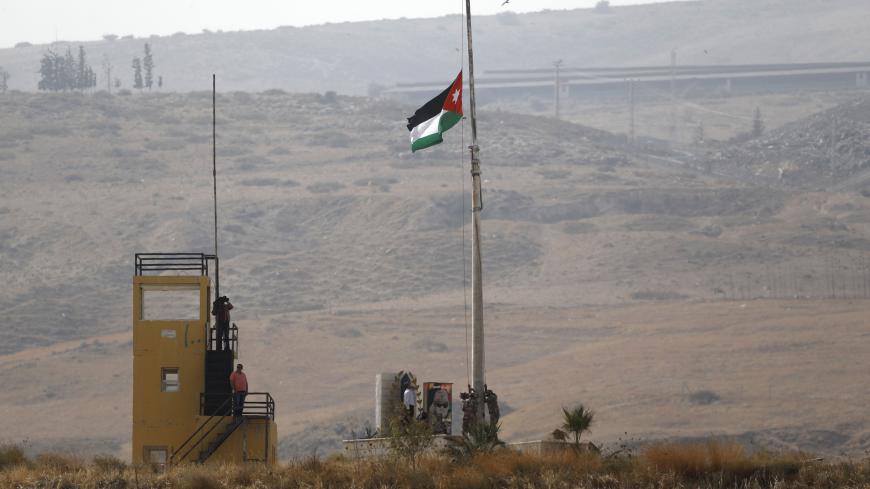 A picture taken from the Israeli side of the border fence in Naharayim, also known as Baqura, shows a Jordanian flag being raised on a military outpost in the Jordan Valley, Oct. 22, 2018. - MENAHEM KAHANA/AFP/Getty Images

For the past 25 years, Eli Arazi of Kibbutz Ashdot Yaakov (Meuhad) has been crossing the border between Israel and Jordan almost every day to work his fields in the Naharayim enclave in Jordanian territory. He can do so because of a provision in the 1994 peace agreement between Israel and Jordan that provides some Israeli farmers in the Jordan Valley with the unusual privilege of crossing into the neighboring Arab state without a passport or bureaucracy. Jordanian soldiers at the border open the gate so they can pass into Naharayim with their agricultural equipment to work in their olive, avocado and banana groves and their watermelon patches and cornfields. On Oct. 26, however, 25 years after the signing of the peace accord, it appears the farmers will be forced to abandon the land that they have been working for decades.

In the early 1920s, Pinhas Rutenberg bought land in the Naharayim region from King Abdullah to build a hydroelectric power plant. The mandatory border established in 1922 ran west of this land, effectively making it part of Transjordan, which obtained full independence in 1946. After Israel’s War of Independence (1948) and the ensuing Armistice Agreement (1949) signed on Rhodes, kibbutzim in the region began growing crops in the Naharayim area.

The peace agreement signed October 26, 1994, by Israeli Prime Minister Yitzhak Rabin and Jordanian King Hussein determined that the official border between their two countries would be based on the mandatory border. This posed a problem for Moshav Tzofar, in the Arava region, and two kibbutzim, Ashdot Yaakov (Ichud) and Ashdot Yaakov (Meuhad), in the Jordan Valley, because their fields and orchards are located east of the mandatory line, within Jordanian territory. As a gesture of goodwill, Jordan agreed to allow Israeli farmers there to continue to work the lands for a period of 25 years. It was also agreed that the arrangement would be automatically renewed unless one of the parties expressly opposed it.

In October 2018, Jordan's King Abdullah II said that he would not be renewing the arrangement. The announcement sent the farmers of Tzofar and Ashdot Yaakov into a tailspin. It, in effect, threatened their livelihood, bringing an abrupt end to agricultural and tourist activities that they had developed over decades. On Oct. 16 this year, Maariv reported that Israel and Jordan had reached an interim agreement to extend the Tzofar lease by six months, but other reports dispute this.

“It was our parents who first transformed this territory from an uncultivated area into fertile agriculture land,” Eli Arazi told Al-Monitor. “No one else has ever farmed these lands. The peace agreement between Israel and Jordan also stipulates that these are privately owned lands. We are asking for something very simple: Let us continue to farm the lands, which our parents and grandparents worked so hard to develop especially given that no one questions our ownership of them.”

Having given up on the Israeli government due to its apparent inactivity on the matter, on Oct. 10 local residents sent a personal letter to Abdullah signed by Idan Greenbaum, head of the Jordan Valley Regional Council, requesting a meeting with the king to try to reach a new arrangement to allow the farmers to continue to access their lands.

“I’m not naïve,” Greenbaum told Al-Monitor, admitting that the odds of the Jordanian monarch intervening are about the same as his winning the lottery. “But anyone who doesn’t fill in a lottery ticket has no chance of winning whatsoever. Farmers are optimistic people. Anyone who sows in winter so that the soil will produce crops in spring, must be optimistic. All in all, we have an excellent relationship and plenty of instances of cooperation with our neighbors across the border. We fight against agricultural pests and brush fires together, and much more.”

Greenbaum said that the Jordanians will not benefit from the king's decision in any way, while the potential for cooperation is enormous. “Instead of this land reverting to scrub, let’s extend a hand to the Jordanians and say, ‘Let’s work hand in hand. Let’s create joint projects based on the exchange of knowledge. We will employ Jordanians in our orchards and create a joint tourist project centered around the historic power plant. We will create a common future here.’ After all, we are talking about privately owned land, and no one but us can use it.”

Professor Asher Susser, an expert on Jordan at Tel Aviv University, has a somewhat less optimistic outlook. “The farmers of Naharayim are paying the price of Jordanian disillusionment with the peace treaty,” he told Al-Monitor. “After the peace agreement was signed, the Jordanians were convinced that they would make progress toward resolving their major problems. They hoped that a Palestinian state would be created, and that their economy would flourish, when what actually happened was the exact opposite of that. Their expectations were not met, and worst of all, Jordan considers the failure to reach some agreement on the Palestinian issue to be an existential threat.”

Arazi, a member of the diplomatic delegation that oversaw implementation of the peace process, is also a permanent member of the joint Israeli-Jordanian committee on Naharayim and Tzofar. He believes that pressure on Abdullah from the Jordanian street is what has prevented the parties from finding a solution.

“Israel must give something in exchange,” Arazi said. “As a first stage, we hope to achieve an extension of the special arrangement until a new government is formed [in Israel]. After that, we will have to offer King Abdullah greater cooperation on the Temple Mount issue and promise to take a closer look at Jordanian claims that joint projects such as the Jordan Gate industrial park initiative and the Sea-to-Sea Canal have been delayed.

By contrast, Susser thinks the Israeli farmers' situation is already a lost cause. “I have a hard time seeing how the Jordanians would go back to the special agreement,” he said. “[Prime Minister Benjamin] Netanyahu’s announcement that he plans to annex the Jordan Valley didn’t help either.”

Susser is convinced that the king has been swayed on the farmer issue by Israeli policy rather than public opinion. “Israel’s rejection of the two-state solution, the situation on the Temple Mount and the fact that the Jordanians feel like Israel is not fulfilling its part of the peace agreement have provided King Abdullah with real grounds to avoid making this gesture to Israel. As far as the king is concerned, there is no reason for him to continue making gestures to Israel when he is not getting what he expects in return.”

Meanwhile, Greenbaum is preparing to leave his plots. “If we are forced to go, we will leave the land as is, together with the infrastructures and the crops,” he said. For Greenbaum, however, the situation is about much more than agricultural land. “[Early Zionist activist] Joseph Trumpeldor once said that ‘Our border will run where the Jewish plough tills its last furrow.’ For years, we have been fulfilling this legacy. Our leaving this land is detrimental to our fulfillment of the Zionist mission. I hope the government realizes that too.”