Iran’s Rouhani shows spark of old self against hard-liners

Now that the Iranian president is out from under the pressure of his brother’s corruption trial, he appears to be returning to the outspoken moderate-reformist views that got him reelected. 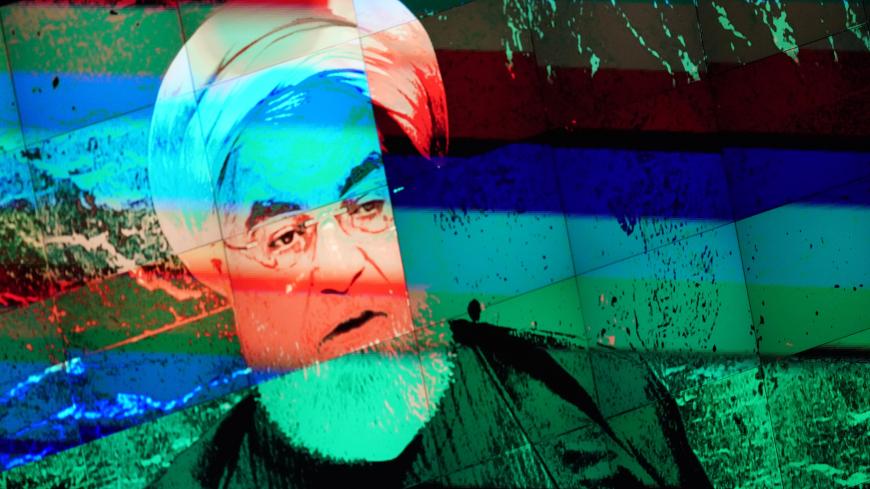 In the past few weeks, Iran’s moderate president, Hassan Rouhani, has sought to defy hard-liners by bringing up controversial issues in his speeches.

During the past two years, Rouhani has disillusioned his fans and supporters who assumed that he would be committed to his promises: increasing social and political freedom and solving the long-standing dilemmas the country faces, including Tehran-Washington ties.

What prompted people to stand behind Rouhani in the 2017 election was in part their recollection of his image from the 2013 race. Voters then were attracted to his risky courage: After becoming president, he crossed red lines by speaking with then-US President Barack Obama, and helped jump-start the 2015 nuclear deal, which was seen as a stepping stone for gradual normalization of bilateral relationships.

Voters also saw some of this fire in his harsh speeches throughout the 2017 race. But in the months after his landslide reelection in May 2017, Rouhani seemingly forgot what he had promised, as if his ascendance had occurred without the people’s vote.

At the time, there were whispers in political circles that the president was anguished and silenced by his brother’s bribery trial.

On Oct. 16, after a long wait by hard-liners, Rouhani’s brother and aide, Hossein Fereydoun, was sent to Evin prison to serve a five-year term for accepting bribes — an accusation he continued to deny before stepping into prison. He said all the evidence against him was based on an illegal phone tap.

Rouhani remained silent, possibly to demonstrate his obedience to the law and to show he makes no exceptions when fighting corruption.

Fereydoun seemed to be Rouhani’s Achilles' heel. But now the president sees himself freed of the limitations and anxiety he’d been carrying on his shoulders. On the same day his brother was sent to prison, Rouhani gave a controversial speech that made both hard-liners and conservatives furious.

“Some say that negotiating with foreigners is a waste of time and we have to confront them, and then one day they will soften their stance, while some believe that war and confrontation won’t get us anywhere,” said Rouhani.

“We have been debating this for 40 years. We should choose our path,” he said, calling for a voter referendum.

In response, Hossein Shariatmadari, chief editor of the state-run hard-liner mouthpiece Kayhan daily, lashed out at Rouhani, saying Oct. 16, “Are we crazy [enough] to negotiate with the US? We are not.” Moreover, Kazem Sedighi, a hard-line Friday prayer leader in Tehran, took a swipe at Rouhani, saying Oct. 27 that the president has “forgotten” God.

“Those who insisted on negotiating kept promising that [nuclear] sanctions would be lifted … and the economy would grow. Which one of your promises has been fulfilled that you rely on negotiation again?” he said, referring to Rouhani’s remarks about the need to hold a referendum.

A few days later, Rouhani struck back at hard-liners, speaking about the Financial Action Task Force (FATF), a global monitor of money-laundering and terrorism financing.

“Why do some people obstruct the four [FATF-related] bills passed by the government and the parliament? This is not in the interests of the country,” the president said.

Rouhani’s opponents on the conservative-dominated Guardian Council have held up the bills, even though the FATF removed Tehran from the FATF blacklist and suspended countermeasures, while at the same time urging Iran to meet FATF demands by February or face consequences. The opponents have called the FATF bills “a colonial prescription” for Iran.

In the same speech, targeting conservatives who are hopeful about taking over parliament in 2020, Rouhani described the recent trials of giant companies’ executives and CEOs for alleged corruption as campaign maneuvers. But, he said, “I will tell people who has shut down the country.”

In reaction, hard-liners dubbed his speech a “new wave of psychological war."

Rouhani has almost two years before his second term ends to prove to his supporters that he hasn’t forgotten his electoral promises. His new moves and statements may signal his determination to bring about change, which would take courage, as when he decided to speak with Obama in 2013, even though he knew what a hard time he could expect in Tehran. Nonetheless, many are disappointed and believe that Rouhani’s new ideas and threats will be limited to a bunch of speeches instead of action, and that he will never turn them into reality.

“Mr. Rouhani knows [well] that we have had few presidents end their terms with a happy ending,” Akbar Torkan, a former senior adviser to Rouhani, said Oct. 26.

“At the moment, he must decide to stand up and speak out … or think about how to finish his presidency with the least challenge. This is a difficult decision,” Torkan said, referring indirectly to the troubles and limitations former President Mohammad Khatami (1997-2005), a reformist, has faced.

While not everyone is hopeful about Rouhani following through on his vows, we should wait to see if he will press the “factory reset” button to reemerge as his classic 2013 version. If he does, we will witness important and exciting developments in Iran’s domestic scenes in the next months.