Tehran will likely look to Russia and China to purchase advanced weapons when a UN arms embargo against the country expires next year, a senior defense intelligence official said Nov. 19. 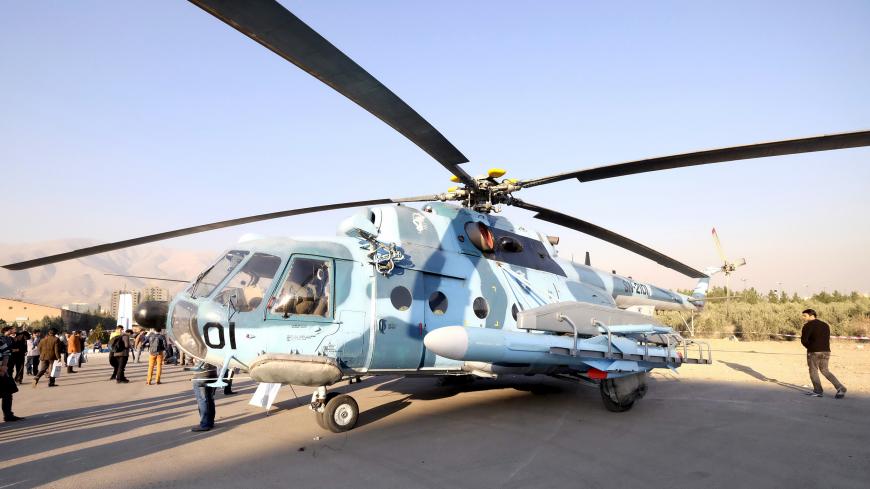 A missile made by the IRGC is mounted on a Chinese helicopter during the sixth exhibition of the aviation industry in Tehran, Iran, Nov. 25, 2015. - REUTERS/Raheb Homavandi/TIMA

Iran is likely to seek out Russia and China to purchase advanced weapons systems such as tanks and fighter jets when a United Nations arms embargo against the country expires next year, a senior defense intelligence official said today, amid rising tensions in the Middle East.

In a report released on Tuesday that unveils the Defense Department’s public assessment of Iran’s military capabilities, the Pentagon’s top intelligence agency expressed concern that “modern conventional capabilities” will be available to Tehran when the UN embargo expires in 2020, allowing the country to become “a more traditional military force.

“We see Iran’s goal here as trying to deter attacks on Iran,” the official said at a Pentagon briefing on Tuesday. “With the embargo ending, we expect them to go after [fighter jets] — their current air force is dated — and also main battle tanks.”

UN Security Council Resolution 1929 calls on members of the world body not to transfer those systems, along with armored combat vehicles, large-caliber artillery systems, combat aircraft, attack helicopters, warships and missiles. “Given what they currently have in stock, we see them looking at Russia and China,” the official, speaking not for attribution, told reporters.

An influx of Russian and Chinese weapons would provide a boost to Iran’s increasingly dated arsenal of fighter jets and armor that includes equipment that dates to the 1970s, which has forced Tehran to lean heavily on ballistic missiles. Once the embargo ends, Iran’s air force is likely to seek fourth-generation fighters such as the Russian Su-30, the report said.

But if the US-led “maximum pressure” campaign continues, Iran could face financial pressure on its military budget. The senior defense intelligence official said that Iran’s defense spending “has taken a hit” partially due to US sanctions that were reimposed after US President Donald Trump decided to exit the 2015 Iran nuclear deal last year.

Those sanctions, the official said, have constrained Iran’s efforts to develop ballistic and cruise missiles, but have also caused Iran to launch a “counter US maximum pressure campaign,” which has included gradually ramping up uranium enrichment over the summer, culminating in the news earlier this month that Tehran had resumed activity at the Fordow site.

“If they kick inspectors out of their facilities … we’re in a different world,” Michigan Democratic Rep. Elissa Slotkin, a former Defense Department official and CIA analyst, told Al-Monitor at a breakfast on Tuesday. The move, she said, would send a signal “as an important marker” of possible escalation.

But despite the reimposed US sanctions and with UN rules in the way, Iran has made “rapid progress” in advancing drone capabilities, the official said, which Tehran has passed along to Lebanese Hezbollah and the Houthi rebels in Yemen. The Defense Department has set up a task force led by the Pentagon’s top acquisition official, Ellen Lord, to counter drone proliferation.

American officials also fear that Iran has increasingly sought to court China as an end-around to develop advanced weapons. Earlier this year, the State Department expressed concern that China is protecting Karl Lee, who is suspected of providing dual-use technologies to Iran that would allow its military to develop more accurate ballistic missiles.

The US Defense Intelligence Agency's warning comes as the United States has taken increased steps to cut down on military tensions in the Gulf after the Pentagon blamed Iran for drone and cruise missile strikes on an Aramco refining facility in Abqaiq in September. Earlier this month, the Defense Department opened a center for maritime patrols in the Gulf in Bahrain, home of the US Fifth Fleet. The USS Abraham Lincoln transited the region on Nov. 19, the first time an aircraft carrier has come through the region in months.

But despite an influx of 14,000 American troops into the region since the summer — who have either been deployed or have seen their tours extended — Iran still seeks to “have a dominant position in the region,” the US-led coalition fighting the Islamic State told the Pentagon’s inspector general in a report released Nov. 19, continuing access to Lebanese Hezbollah and the ability to strike Israel from Syria.

The risk to US forces has not diminished either, the inspector general’s report said. US Central Command has assessed that Iranian threats against American troops in the region have increased in the past three months.

China in the Mideast
Sanctions