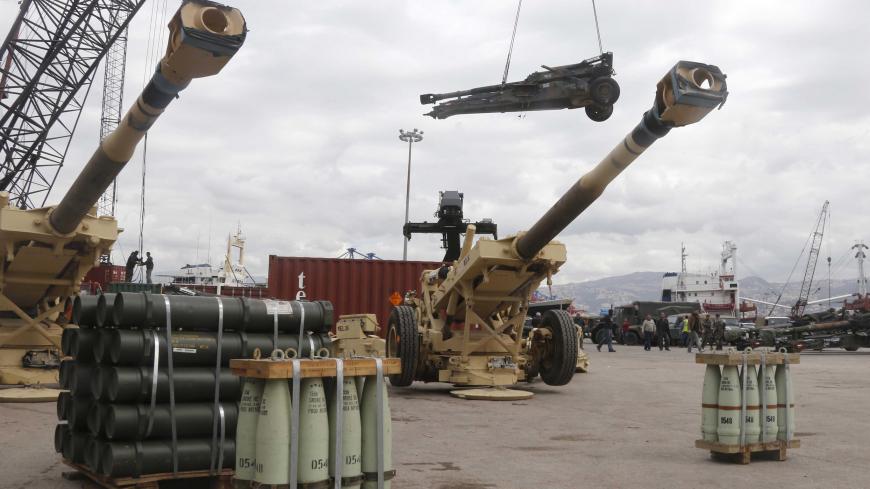 Workers unload artillery, part of a military donation from the US government to the Lebanese army, during a ceremony at Beirut's port, Feb. 8, 2015. - REUTERS/Mohamed Azakir

The White House blew through a Friday deadline to justify its decision to freeze $105 million in US military aid for Lebanon to Congress, two congressional aides told Al-Monitor. The administration of President Donald Trump has not explained the controversial move to Congress in repeated meetings.

Last week, House Foreign Affairs Committee Chairman Eliot Engel, D-N.Y., and Rep. Ted Deutch, D-Fla., asked Office of Management and Budget Director Mick Mulvaney to provide a rationale for the hold, and whether the White House consulted the State and Defense Departments before making the decision.

Mulvaney's office did not respond to Al-Monitor’s request for comment. The failure to respond is likely to stir anger on Capitol Hill, especially from Deutch, who leads the Middle East subcommittee on the House Foreign Affairs panel and plans to use a Tuesday hearing with experts to pressure the US administration on the lack of information, a House aide said.

A State Department official said there has been no update on the hold. Another congressional committee aide said the agency had given Congress vague and unspecific assurances that the aid will be released, but has not provided a timeline. Pentagon military aid for a similar amount has continued to flow to Lebanon.

The State Department and the Pentagon have long justified foreign military financing to Lebanon that helps pay for vehicles, weapons, bulletproof vests, ammunition and air-to-ground missiles as a buffer against Lebanese Hezbollah.

But it’s not clear that the White House has informed the rest of the US administration about the reasons behind the hold.

In congressional testimony released as part of the House Intelligence Committee’s impeachment inquiry, the State Department’s Undersecretary for Political Affairs David Hale said he first became aware of the hold on June 21, around the time that the Trump administration had embarked on a review of American aid overseas.

Hale, the State Department’s number three official, said the White House did not explain the reasoning behind the hold, which came at the same time that the United States withheld military aid to Ukraine. “I think the context was, is this the way we are going forth with our foreign assistance review,” Hale told the committee in a closed deposition earlier this month. “But we didn't know.” The House is investigating whether Trump withheld $391 million in military aid to Ukraine in exchange for Kyiv launching an investigation into his Democratic rival Joe Biden.

As the Trump administration has refused to explain the reasons for cutting military aid, the US interagency and Congress worries that Iran could be maneuvering to exploit protests in the Middle East. The Defense Intelligence Agency described Hezbollah as Iran’s “most important and longest standing nonstate partner” in a public assessment of Tehran’s military capabilities released Tuesday.

The group maintains 120,000-150,000 rockets — a larger arsenal than Israel — and an estimated 45,000 fighters, the DIA said, and has recently received drone platforms from Iran.

“[Hezbollah]’s role in Lebanon — in its formal political institutions, as a social provider for Shia society and as a self-proclaimed defender against Israeli aggression — primarily defines its reason for existence,” the DIA said in the Iran Military Power report.

Iran might be positioned “to take advantage” of a protest wave going through the region, including in Iraq, Rep. Elissa Slotkin, D-Mich. said at an Al-Monitor breakfast Tuesday, especially as Tehran traffics ballistic missiles throughout the region. “There are some other indicators out there that are kind of lighting up the board.”