Moscow and Beijing could strike weapons deals with Tehran after the UN arms embargo expires later this year, but their anticipated support will face hurdles. 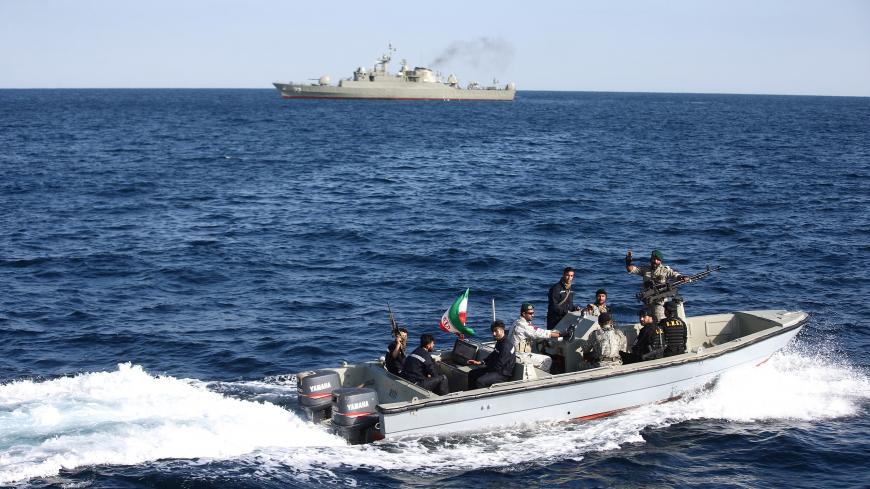 Iranian soldiers wave to the camera from a motor boat in the Sea of Oman during the third day of joint Iran, Russia and China naval war games in Chabahar port, at the Sea of Oman, Iran, Dec. 29, 2019. - Mohsen Ataei/Fars news agency/WANA (West Asia News Agency) via REUTERS

When the UN arms embargo on Iran expires in October, in accordance with the terms of the 2015 nuclear deal, it's unclear to what extent Russia and China will work to boost the Iranian military.

US Secretary of State Mike Pompeo told Congress that the United States “would appeal to the international community to extend” the arms embargo. Moscow, however, argues that the UN Security Council has no plans to consider extending it.

A Russian Foreign Ministry statement from March 3 noted, “It has been said in Congress that the United States would try to convince Russia and China not to veto the draft UN Security Council resolution on extending the arms embargo on Iran. But it is no use raising this matter in the Security Council. There are no grounds for this. The timeframe and conditions coordinated in 2015 are not subject to revision.”

It added, “As usual, the United States presents its multibillion-dollar arms deliveries to the Middle East, which have turned it into a powder keg, as 'just business' and stabilizing actions.”

Russia’s position on the matter is consistent. Deputy Foreign Ministe​r Sergey Ryabkov and Vladimir Ermakov, the director of the Non-Proliferation and Arms Control Department of the Russian Foreign Ministry, have repeatedly stated that Moscow will not buy into the US narrative and that the UN arms embargo on Iran will not be renewed after it expires. Apart from this, Ryabkov emphasized that for all the rhetoric of the US administration, the European troika who are signatories to the deal — including Great Britain, Germany and France — has no intention of bringing Iran’s dossier to the Security Council.

Moscow’s hard-headed, albeit unofficial, approach takes into consideration regional demands and the situation that Tehran is trapped in. On the one hand, Iran needs to pursue its strategy to counter the United States and, on the other hand, to secure sanctions relief from Washington. Undoubtedly, Russia finds it important to have Iran as part of its anti-US coalition, but it clearly has no interest in supporting the country in its nuclear ambitions and camouflaging its efforts to obtain concessions on oil trade through undermining the Gulf investment climate.

At the same time, Russia is fine with the status quo since it can capitalize on the inconsistent policies of the EU and United States toward Iran, offering its mediation services and developing relations with Saudi Arabia, the United Arab Emirates and Israel. The current state of affairs, however, impacts the decision-making process on arms supplies to Iran that will grab broad public attention. As Ariel Bulshtein, adviser to the prime minister of Israel, put it in November 2019, Moscow had agreed at least twice to Israel’s request not to sell advanced weapons to Iran, asking, in its turn, not to cross the previously defined red lines concerning weapons. Indeed, as the official argued, Israel had refused to provide Georgia with several types of weapons, as requested by Russia.

Al-Monitor reported that the latest annual report by the US Defense Intelligence Agency states that Iran’s potential acquisitions after the lifting of UN restrictions include Russian Su-30 fighters, Yak-130 trainers, T-90 MBTs and air defense systems. Meanwhile, Russian sources are reluctant to extensively comment on the talks because of the 2016 decree that plastered a “top secret” label on some documents covering the country’s military and technical cooperation with foreign partners.

However, two people close to the military industrial complex who spoke with Al-Monitor said that the intensified contacts between Tehran and Moscow at the eighth Moscow Conference on International Security in April 2019 have so far taken the form of preliminary consultations. This means the two parties’ have attempted to compile a list of potential weapons for potential deals.

First and foremost, Tehran needs to upgrade its aging aviation fleet to beef up its anti-air combat readiness. Russian and Chinese media outlets circulated reports about the possibility of Iran procuring heavy multipurpose Su-35 and Su-30SM fighter jets or at least Su-27SM3 jets from Moscow and J-10C fighter jets from Beijing, respectively, until heightened tensions with Washington ended the speculation.

The reason may be that the Iranian government has put its stake on the locally made Kowsar. Although the jet is nearly a twin to the American Northrop F-5, a two-seat combat-capable trainer, Iran understandably wishes to equip its armed forces with homemade technologies, thereby boosting its military industrial complex. The Islamic Revolutionary Guard Corps (IRGC) is rumored to be advocating import substitution, as it controls most enterprises in the sector and lobbies its position through the entourage of Supreme Leader Ali Khamenei.

Maj. Gen. Mohammad Hossein Bagheri, the chief of staff of the Iranian armed forces, said in late 2019 that Iran had gained full self-sufficiency in the field of defense and was able to surprise its enemies at the decision-making stage. He said that the Defense Ministry did not count on military equipment supplies from abroad and remarked that all weapons for land, naval and air forces were produced locally.

Regardless of the declared plans in the tank-building industry, namely related to the main battle tank Karrar, a twin to the Russian T-90S, there are grave doubts that it has an independently developed platform. Moreover, the plans of Iranian manufacturers to maintain the pace of production at the level of 50-60 Karrar tanks a year are not feasible. For example, Iran allegedly bought several hundred V-84MS tank engines with the help of Russia a while back.

It sought to equip its Zulfiqar (Zolfaghar) tanks, which were developed in the late 1990s on the basis of the Soviet T-72S and American M48 and M60 and were manufactured in small batches.

Iranian intelligence is actively trying to engage in industrial espionage, especially in ostensibly well-developed sectors. Late in December 2019, the Security Service of Ukraine reported that it thwarted the activities of a group of Iranian immigrants. They were suspected of procuring the delivery of components for anti-tank guided missile systems. In 2016, representatives of UralVagonZavod, Russia’s only tank manufacturer, noted that following the removal of restrictions on military-technical cooperation they were ready to organize the licensed manufacturing of T-90S tanks in Iran, but it is unclear if the proposal is still relevant.

Moreover, the fate of the contract for long-range air defense missile systems remains unclear due to economic reasons and because of low stress resilience, which the Iranian military and the IRGC demonstrated after the Boeing 737 accident. The contract can only be concluded if the Kremlin sees it as a strategic step to prevent a new regional war, given the S-400 capabilities. The missile system improves reconnaissance due to radars with the large coverage area as well as increased response capabilities.

Meanwhile, China-Iran military and technical cooperation is kept under the radar as the parties avoid publicizing it. This interaction often makes Chinese companies a target for American sanctions, which compels them to maintain even stricter secrecy. China is known to be holding consultations with Iran to supply FD-2000 and LY-80 air defense missile systems, each able to be divided into four anti-aircraft companies and create two air defense lines around four nuclear facilities. In the meantime, the Iranian air force has already adopted the JY-10E, the automatic system of air defense forces and facilities control developed by China Electronics Technology Group Corporation.

However, nowadays Russia and even China cannot turn a blind eye to Iran’s regional “toxicity” and the possibility that, for example, the supply of missiles to the air force and the navy can spark outcry. For instance, Yemeni Houthis apparently fired Chinese anti-ship cruise missile C-802 (export version of the YJ-83) at ships in Bab el Mandeb Strait, including the Emirati Swift catamaran. Whether an exporter can be held accountable for the importer’s use of the supplied weapons is a philosophical issue. Yet reputational costs must be considered.