Turkey’s state-owned Halkbank may face financial penalties and further political blowback after once again refusing to recognize criminal charges in a New York court this week. 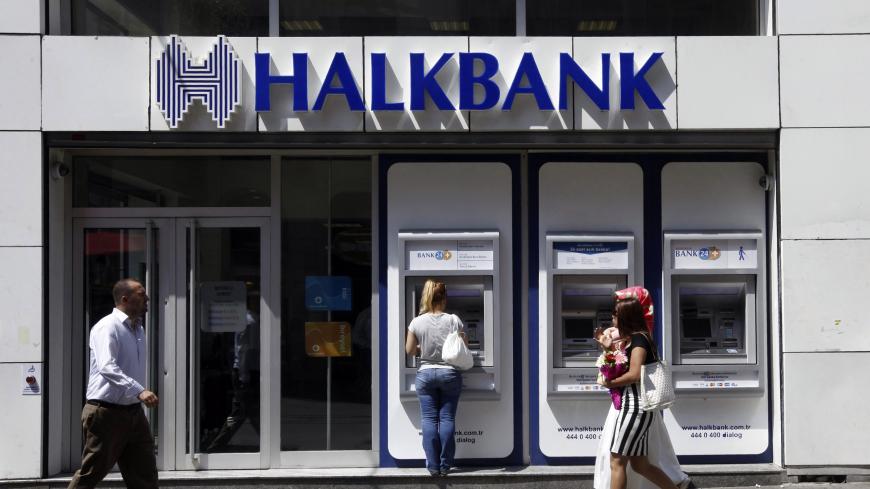 A customer uses an automated teller machine at a branch of Halkbank in Istanbul, Turkey, Aug. 15, 2014. - REUTERS/Osman Orsal

A legal saga involving high-ranking officials in both Washington and Ankara continues after lawyers representing Turkey’s state-owned Halkbank refused to recognize criminal charges brought against the institution by the US Department of Justice on Tuesday.

Following an indictment released on Oct. 15, the bank faces six counts of fraud and conspiracy to evade US sanctions on Iran between 2012 and 2016 in what became known as the “gas for gold" scheme. This week, Halkbank lawyer Andrew Hruska of the King & Spalding law firm said the institution would seek dismissal of the case without recognizing the charges, while also requesting the judge recuse himself for having allegedly exhibited bias in prior media interviews.

Halkbank also asked for permission to make a “special appearance” in the Southern District of New York court where the trial is being held to fight the charges without entering a plea. The dismissal request might draw additional fines for contempt of court. Hruska did not respond to requests for comment.

Sources familiar with the case said the legal maneuvers were highly unusual and were likely efforts to delay court proceedings that could trigger heavy sanctions from the Justice Department, along with separate sanctions packages currently being considered in Congress.

“The penalties could be equivalent to the proceeds of the sanctions scheme, so we’re talking tens of billions of dollars,” Nate Schenkkan, director for Special Research at Freedom House, told Al-Monitor.

He added, “Halkbank is thinking, ‘Let’s just keep on kicking the can down the road and see if we can talk this out with the president.’ I have to say I’m skeptical of that [because] once the indictment has been brought, the president has very limited powers to do anything about it.”

Legal proceedings against Halkbank have been expected since the New York court sentenced Mehmet Hakan Atilla, deputy chief executive of Halkbank, to 32 months in prison in May 2018 for helping facilitate financial and material transfers that helped Iran skirt US-imposed sanctions. Though Atilla was released this July and soon after selected to head the Istanbul stock exchange, speculation persisted over when the broader court case against Halkbank as an institution would commence.

The initial delay drove Democratic Oregon Senator Ron Wyden to open an investigation into whether President Donald Trump personally interfered with criminal proceedings against the bank.

Following the release of the undated indictment on Oct. 15, the Halkbank trial will be handled by US District Judge Richard Berman, who also presided over the Atilla trial, in which Turkish-Iranian gold trader Reza Zarrab testified, claiming he bribed high-ranking government officials in Turkey. Through government connections, Zarrab is believed to have transferred up to $20 billion in wealth to Iran, with the participation of Halkbank, in violation of US sanctions imposed to curb Tehran’s nuclear program. At one point, Zarrab also hired close Trump associate Rudy Giuliani to facilitate his release.

Now, as the broader Halkbank trial is underway, the institution’s legal team has sought to stall proceedings by appearing in court to state Halkbank officials will not recognize the charges filed against them. Berman has previously stated the court would consider “any appropriate sanctions” for noncompliance with the arraignment process, and after this week’s events, prosecutors are deliberating which actions to take against the bank. The briefing on the issue is due early December, according to Adam Klasfeld, a journalist covering the case with Courthouse News.

“Federal prosecutors have told Judge Berman, ‘You have the authority to pursue sanctions if they are in contempt of court,” Klasfeld told Al-Monitor.

He added, “So they need to get to this issue of [whether] there such a thing as a ‘special appearance,’ because there doesn’t seem to be a precedent for that. … They haven’t named what the penalty would be but what they’re saying is this is contempt of court and we have a ‘fugitive’ defendant, that’s the word they use.”

The deliberation adds to an unusually convoluted trial that is further complicated by the lack of date on the indictment, suggesting the file may have been prepared months earlier, Klasfeld noted.

The timing of the indictment has also come into question, as it was unsealed less than a week after Ankara began its third incursion into Syria. The operation drew international condemnation as well as new sanctions legislation from Congress.

“It had seemed like this issue was closed,” Turkish President Recep Tayyip Erdogan said in a speech on Oct. 16. “Now, by opening it again, Southern New York prosecutors have unfortunately taken an unlawful, ugly step.”

Turkish Foreign Minister Mevlut Cavusoglu claimed on Oct. 20 that nothing would come of the case “if the law in the United States works.”

Schenkkan said the timing of the indictment was less likely a show of political interference “in the classic sense” and more emblematic of disagreements between institutions in Washington.

“There’s nothing really new in the indictment; there doesn’t seem to be any added event except relations with Turkey have gotten much worse and the fine hasn’t been imposed by the Treasury, so to me it reads like the Justice Department getting frustrated,” Schenkkan told Al-Monitor.

Analysts have long stated sanctions resulting from the Halkbank case, if eventually imposed, could prove devastating to the Turkish economy. Yet Wolf Piccoli, co-president and political risk analyst at Teneo Intelligence, said their impacts are difficult to predict as the penalties remain undefined and their effects depend on global market sentiment at the time of the announcement — which some believe could take years.

“A multi-billion-dollar fine will likely undermine the Turkish lira but the extent of the possible depreciation will also depend on Ankara’s reaction,” Piccoli told Al-Monitor. “In the most likely scenario, Ankara will threaten not to pay, but then reality will quickly kick in and the Turkish authorities will quietly deal with the matter.”

He added, “It is largely a risk for Turkey’s financial markets and not so much for the real economy. There is no doubt that the Turkish state will do whatever is necessary to keep Halkbank afloat if punished with a large fine by the US authorities.”